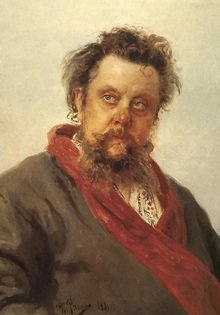 His melodies have a strong connection to Russian history, Slavic mythology and folklore. For many years his works were mainly known through versions that were revised or remade by other composers and it wasn't until his death that his talent was fully understood, with many critics suggesting his style was simply way ahead of its time. Today he is considered a pioneer of Russian opera alongside such musical giants as Pyotr Tchaikovsky and Dmitry Shostakovich. This is Modest Mussorgsky.

Modest Mussorgsky was born in 1839 into a well-known noble Russian family, allegedly related to the legendary Ryurik who, as many historians believe, founded the Russian state in the ninth century. Although one of his grandmothers was a peasant, his father was a State servant and his mother – the daughter of an esquire. At the age of six, his mother, a trained pianist herself, began teaching him piano. Just three years later young Mussorgsky was already able to perform a John Field concerto and works by Franz Liszt for family and friends. After acquiring further musical education at the elite Peterschule (St. Peter's School) in St. Petersburg, at the age of twelve Mussorgsky published his first piano piece entitled "Porte-enseigne Polka.” The publication was paid for by his father. But his parents also wanted him to receive a military education, so Mussorgsky ended up graduating from the Cadet School and received a commission with the foremost regiment of the Russian Imperial Guard - the Preobrazhensky Regiment - in 1856. That winter Mussorgsky met Aleksandr Dargomyzhsky, one of the most influential composers in Russia at that time. But the meeting that most influenced Mussorgsky's music career was with Mily Balakirev, the head of the composers’ group known as The Five. With them, he learned to read scores and analyzed the styles of Western composers. Just a few months after studying with Balakirev, Mussorgsky resigned his commission, fully devoting himself to music. The first fruits came fast. In 1958 Mussorgsky composed two scherzos, which were each part of a symphony that was performed eight years later in a concert directed by composer Anton Rubinstein, the founder of Russia's first Conservatoire. 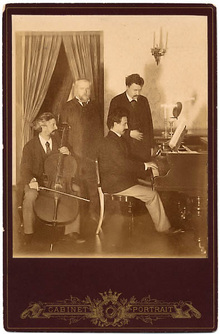 Also known as The Mighty Handful and The Mighty Coteries, The Five was a group of composers in St. Petersburg that was active between 1856 and 1870. Besides Mily Balakirev, it also included Cesar Cui, Nikolay Rimsky-Korsakov, Aleksandr Borodin and Modest Mussorgsky. Most of them were self-trained amateurs: Borodin made a living by pursuing a career in chemistry and Rimsky-Korsakov was a naval officer who created his First Symphony on a three-year-long voyage around the globe.

The group’s main goal was to produce a specifically Russian kind of music and not an imitation of older European sounds or European-style conservatory training. By using melodies from village songs, Cossack and Caucasian dances, church chants and more – the Five’s music was filled with imitative sounds of Russian life. The group even tried to make their own version of the lyrical peasant song, dubbed by Glinka as “the soul of Russian music” by studying songs from the Volga River in the 1860s. Ironically, The Five’s creativity and style was not welcomed by many old-style musicians and was mocked by the academic circles of the Conservatory and the Russian Musical Society. This lack of support from society ended up causing the dissolution the group. However most of its members continued experimenting in music and looking for new talent on their own.

Mussorgsky began composing romances and experimenting with the opera genre. In 1868 he took on Gogol's “Zhenitba” (“The Marriage”) and managed to finish the first eleven scenes, but abandoned it after reaching the end of Act 1. Nevertheless, this work clearly showed Mussorgsky's extreme pursuit of incorporating the natural accents and patterns of the play's naturalistic dialogue into music. Despite abandoning “Zhenitba,” the composer didn't stop working in the opera genre.

Success came shortly after his opera "Boris Godunov" was performed at St. Petersburg's Mariinsky Theater. In 1874 a second version of the opera came out after the theater's repertoire committee scrapped the original, allegedly for being impossible to recite. The new version was performed fifteen times over the next ten years. The opera returned to the stage in 1896 after it was edited by composer and music critic Nikolay Rimsky-Korsakov, who claimed to have fixed and restructured the whole composition. According to Rimsky-Korsakov, Mussorgsky's version had flaws in its style and orchestration. However, it's important to stress that the original version of “Boris Godunov” became much more popular and better understood in the twentieth century. Many music experts explain this by saying Mussorgsky had a different kind of style, which was just appearing in various parts of the world in the late nineteenth century. That's why the original "Boris Godunov" and its second version were not as popular as they could have been during Mussorgsky's lifetime.

Unfortunately, the biggest obstacle in the way of Mussorgsky's art was his desire for alcohol. It’s thought to have begun when his mother died in 1865 and grew over the years. The composer was even reportedly seen in so-called “fits of madness” that could have been alcohol-induced. The situation became even worse after the death of his friend Viktor Hartmann, and when his relative and roommate moved away to get married.

Interestingly, alcoholism was somewhat of a typical behavior for Mussorgsky's generation, with many using it as a form of protest. One contemporary wrote: "An intense worship of Bacchus was considered to be almost obligatory for a writer of that period. It was a showing off, a 'pose,' for the best people of the 1860s.''

Despite this nineteenth century punk-rock behavior, for some time Mussorgsky was still able to create. In 1875 he began working on his opera "Khovanshchina." He almost managed to finish its music and lyrics, but only two parts were fully orchestrated in the end. Its complete version was once again revisited by Rimsky-Korsakov with his own additions and adjustments. In 1960 the world famous composer Dmitry Shastakovich made his own edit of "Khovanshina," which is still performed in various opera houses around the globe today.

The last years of Mussorgsky’s life were the most difficult. With no job and no money he literally had to scrape by just to survive, living in a small room with five other people. Slight relief came in the summer of 1879 when the famous Russian singer Leonova invited the composer to accompany her on a concert tour of southern Russia. Mussorgsky did say this trip created many new positive emotions, but it wasn’t enough to help him overcome his addiction to alcohol. In 1881 Mussorgsky suffered four seizures and was hospitalized. It was at this time that painter Ilya Repin made his famous Red-Nose portrait, which reflected the last days of the composer's life. One week after his 42nd birthday, Modest Mussorgsky passed away.