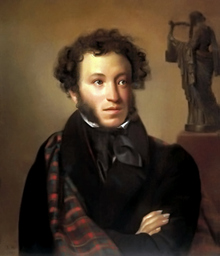 Aleksandr Pushkin is considered Russia's greatest poet and the founder of modern Russian literature. Pushkin was the first to use everyday speech in his poetry, fusing Old Slavonic with vernacular Russian. This blend gave his works their rich, melodic quality.

Aleksandr Pushkin was born in Moscow on 6 June 1799 into a cultured but poor aristocratic family, with a long and distinguished lineage. On his father's side, he was a descendant of an ancient noble family; his mother was a great granddaughter of Gannibal, the legendary Abyssinian, who served under Peter the Great. Pushkin's mother took little interest in the upbringing of her son, entrusting him to nursemaids and French tutors. Pushkin got acquainted with the Russian language through communication with household serfs and his nanny, Arina Rodionovna, whom he loved dearly and was more attached to than to his own mother.

In 1811, along with 30 other distinguished young men, Pushkin was admitted to the Lyceum, an exclusive school for the nobility, located outside St. Petersburg in Tsarskoe Selo. It provided the best education available in Russia at the time. An unofficial laureate of the Lyceum, in no time, Pushkin drew the acclaim of his teachers and peers for his poetry. His first publication appeared in the journal The Messenger of Europe in 1814. In 1815, at the public examination at the Lyceum, the audience was swept by his poem "Recollections about Tsarskoe Selo," which was highly praised by Gavriil Derzhavin, the most influential poet of the time. At the Lyceum, Pushkin formed rock solid friendships with many other students, and cherished this "Lyceum brotherhood" for the rest of his life.

After graduating from the Lyceum in 1817, Pushkin was given a sinecure in the Collegium of Foreign Affairs in St. Petersburg. The next three years he spent easily sailing through life, welcome both in literary circles and at bacchanal Guard parties. Despite this frivolous lifestyle, Pushkin nevertheless was still committed to social reform. Like many of his Lyceum friends, he became associated with members of a radical movement, responsible for the Decembrist uprising of 1825, but Pushkin himself was never a part of the plot. Between 1817 and 1820, his ideas were vocalized in "revolutionary" poems, namely his "Ode to Liberty," "The Village" and a number of poems about Emperor Alexander I and his conservative minister Arakcheev. At the same time, Pushkin took up his first large-scale work, "Ruslan and Ludmila," a fairy tale in verse.

"Ode to Liberty" angered the Russian Emperor, and he banished Pushkin from St. Petersburg for six years. Pushkin left for Ekaterinoslav on 6 May 1820. Soon after his arrival there, Pushkin traveled around the Caucasus and the Crimea. He was then transferred to Chisinau, Moldova, for three years. In the meantime, Pushkin fell under the spell of George Byron's work, and eventually became the leader of the Russian Romantic Movement. He wrote a series of narrative poems, featuring exotic southern settings and tragic romantic encounters: "The Prisoner of the Caucasus" (1820-1821), "The Bandit Brothers" (1821-1822), and "The Fountain of Bakhchisaray" (1821-1823).

With the aid of his influential friends, in July 1823 Pushkin was transferred to Odessa, Ukraine, where he engaged in going to the theater, social outings, and love affairs. His literary creativity thrived, as he completed "The Fountain of Bakhchisaray," began "The Gypsies" and the first chapter of "Eugene Onegin," his big-name novel in verse which provided a dazzling yet insightful portrait of a world-weary young member of the nobility who fails to appreciate a woman's love until it is too late and she is married to another person. 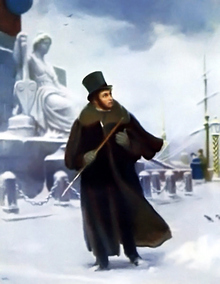 After postal officials intercepted a letter which revealed his thinly-veiled support of atheism, Pushkin was exiled to his mother's estate of Mikhaylovskoye in northern Russia. The next two years, from August 1824 till August 1826, he lived at Mikhaylovskoye under surveillance. However unpleasant Pushkin might have found his virtual imprisonment in the village, the years at Mikhailovskoye saw the maturation of his talent, as he moved away from the sensuous flavor of his southern poems toward a more austere and incisive form. While at Mikhaylovskoye, he completed "The Gypsies," wrote the dramas "Boris Godunov" and "Count Nulin" and the second chapter of "Eugene Onegin." His sweeping historical tragedy, "Boris Godunov," was published in 1831. It was based on the controversial reign of Boris Godunov, the Russian Tsar from 1598 to 1605.

When the new Emperor, Nicolas I, allowed Pushkin to return to Moscow, the poet openly abandoned his revolutionary sentiments. When the Decembrist Uprising took place in St. Petersburg on 14 December 1825 (the failed conspiracy organized by a group of aristocrats to overthrow the legitimate Emperor Nicolas I and to replace him with their protégé, the Emperor's brother Konstantin), Pushkin, still at Mikhailovskoye, was not involved, but greatly sympathized with the rioters, many of them being his Lyceum friends. In the late spring of 1826, he sent the Tsar a petition that he be released from exile. After the uprising had been suppressed and many of its participants sentenced to the death penalty, Pushkin's friends among them, Pushkin's activity was subjected to a meticulous investigation to establish his plausible connection with the rioters. After a very detailed interview with the Emperor himself, Pushkin was ecstatic to find out his appeal had been allowed, however, with the Emperor personally censoring all of his works.

Later, Pushkin was to discover that his freedom was not entirely unconditional. Count Benkendorf, Chief of the Gendarmes, let Pushkin know that without prior permission he was not to make any trip, participate in any journal, or publish - or even publicly read - any of his works. He was questioned several times by the police about poems he had written. 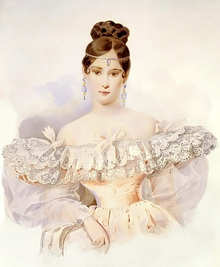 Meanwhile, Pushkin, still light-hearted and at the stage of matrimony, engaged in searching for an appropriate wife. He sought no less than the most beautiful woman in Russia for his bride. In 1829, he found her in Natalya Goncharova, and plighted his troth to her in April of that same year. She finally agreed to marry him on the condition that his ambiguous situation with the government be clarified - and it was. As a wedding gift, Pushkin was given permission to publish "Boris Godunov" after four years of waiting for approval. He was formally betrothed on 6 May 1830.

Financial arrangements in connection with the recent acquisition of part of the family stead required that he visit the neighboring estate of Boldino in east-central Russia. Pushkin had only planned go be there for a few days but to his dismay, he got stranded by an Asiatic cholera outbreak for three months. These three months in Boldino, however, turned out to be the most fruitful period of his life in terms of creativity. During the last months of his exile at Mikhaylovskoe, he did produce two more chapters of "Eugene Onegin", but in the four subsequent years he had only written "Poltava"(1828), his unfinished novel "The Blackamoor of Peter the Great" (1827), a narration about his Abyssinian ancestor Gannibal, and chapter seven of "Eugene Onegin" (1827-1828). During the autumn at Boldino, Pushkin wrote the five short stories of "The Tales of Belkin"; the versed tale "The Little House in Kolomna"; four "little tragedies": "The Avaricious Knight," "Mozart and Salieri;" "The Stone Guest", and "Feast in Time of Plague"; fairy tales in verse, the last chapter of "Eugene Onegin" and a great number of poems.

Pushkin finally married Natalya Goncharova on 18 February1831 in Moscow. In May, the Pushkins moved to Tsarskoe Selo, to settle for a more frugal life and enjoy the peace and tranquility of the countryside. They never found what they wanted, as a cholera outbreak in St. Petersburg drove the Emperor and his court to take refuge in Tsarskoe Selo in July. In October of 1831 the Pushkins moved back to St. Petersburg to an apartment where they spent the rest of their lives.

Natalya's beauty immediately made a sensation in high society, the Emperor himself being one of her admirers. Because of her popularity, Pushkin was forced to spend more time in the capital than he wished. On 30 December 1833, Nicholas I made Pushkin a Kammerjunker, a low court rank usually granted to the youngsters of high aristocratic families. Pushkin was deeply offended and all the more convinced, that, apart from being worthless in terms of career, the rank was merely an excuse for his wife to frequent court balls.

Pushkin could ill afford the expense of gowns for Natalya for court balls, required for performing court duties. His troubles further increased when her two unmarried sisters came to live with them in the autumn of 1834. In addition, in the spring of 1834, he had taken over the management of his father's estate and agreed to settle the debts of his heedless brother. His financial situation was so aggravated that he applied for a substantial loan to cover his most pressing debts, and for the permission to publish a journal. He received the loan and a little later, in 1836, was permitted to publish a quarterly literary journal, The Contemporary. The journal was not a financial success; in addition, it got Pushkin involved in endless editorial and financial debates and in trouble with the censors. Short visits to the country in 1834 and 1835 resulted in the completion of his fairy tale in verse, "The Tale of the Golden Cockerel"(1834) while in 1836 he completed his novel, "The Captain's Daughter," about Pugachev's peasant uprising of 1773-1775, and a number of his finest lyrics. 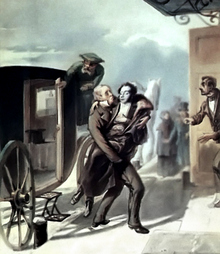 Pushkin returns from duel. Etching by P.Borel,
1855 (Image from www.a4format.ru)

By the mid 30s, many critics began to refer to Pushkin's works as outdated and obsolete, which was a disastrous thing for Pushkin to hear; it dispirited him immensely. In addition to that, his family life had hit the rocks as well. In 1834 Natalya Pushkina met a handsome French royalist émigré in Russian service. Young d'Anthes had been pursuing her for two years, and eventually, his claims became so open and unabashed, that in the fall of1836, it led to a scandal. Pushkin challenged d'Anthes to a duel. He retracted the challenge, however, when he learned from rumors that d'Anthes was "really" in love with Natalya's sister, Ekaterina Goncharova. On 10 January 1837, their marriage took place, but Pushkin refused to attend the wedding or to receive the couple in his home. After the marriage, d'Anthes resumed pursuing Natalya Pushkina with doubled tenacity. A duel between Pushkin and d'Anthes finally took place on 27 January 1837. D'Anthes fired first, and Pushkin was mortally wounded. He died two days later, on 29 January.

Thousands of people of all social levels came to Pushkin's apartment to express sympathy and to mourn him. Fearing a public outcry over the senseless loss of this great figure, the authorities falsely declared that a funeral service would be held in St. Isaac's Cathedral in St. Petersburg, with admission only granted to members of the court and diplomatic society. The real service, however, was held in secret a day before it was announced, and Pushkin's body was smuggled out of the capital in the dead of night.

Pushkin was buried beside his mother at dawn on 6 February 1837 at Svyatye Gory Monastery, near Mikhaylovskoye. This place, with exquisite Pushkin family estates snuggled in the picturesque landscapes, has become a Mecca for all those in love with Pushkin's works and literature in general.