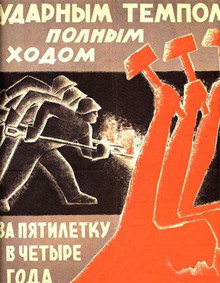 The Soviet Union was a country with a state-controlled economy. Every five years, government developed plans for all plants and collective farms in USSR, ordering them to produce exact amounts of goods in the following five year period. The committee responsible for the creation of those plans was called State Planning Committee (Gosudarstvenny Komitet po Planirovaniyu), or, in short, “Gosplan”.

The prototype of the Gosplan was GOELRO – “The State Commission for the Electrification of Russia” (Bolsheviks loved abbreviations). It was created in 1920 per the initiative of Vladimir Lenin to carry out a statewide electrification project that had been developed earlier. That same year, Herbert Wells visited the Soviet Union, looked through this project, declared it utopian, and called Lenin “a Kremlin dreamer”. When in 1934 he returned to USSR, he admitted his mistake – the seemingly unrealizable plan had been overly fulfilled.

“Gosplan” was created in 1923 to coordinate the economic plans of the Soviet republics and to work out a general USSR plan; then its functions were changed from coordination to creation and supervision.  With the help of Gosplan, the USSR turned from an agricultural to an industrial state in ten years. In 1928 -1937, 5000 plants and factories were built all over the Soviet Union.

In 1949, the head of the Gosplan was accused of high treason and executed. According to accusations, he was plotting along with several other communist party bosses to overthrow Joseph Stalin and abolish the Soviet Union. However, the whole case was a sham invented by  the authorities, like many other cases those days.