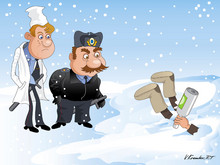 The vytrezvitel’ was a sobering-up station in the republics of the former USSR, as well as in some Eastern European countries such as the Czech Republic, Slovakia and Poland. It is a medical facility controlled by police, where highly intoxicated people are brought.

For many centuries Russian Tsars, noblemen, landlords and officers had thought hard on how to make their heavily drinking subordinates sober up as quickly as possible. In the 18th century there were special sobering-up rooms in the eating quarters of one of Russia’s cavalry regiments. But the concept of the vytrezvitel’ was developed by Russian Doctor Fyodor Archangelsky in the city of Tula near Moscow in 1902.  At that time, the authorities of this city, famous for the production of guns and heavy machinery, were concerned with the heavy drinking among the workers. A drunken person could easily freeze to death if he fell over after having too much alcohol in the winter. That’s why there was a great concern that the factories could lack workforce, which could lead to a decline of the local economy.

Doctor Archangelsky was at the frontline of this effort. When he was making a speech at the opening of the first vytrezvitel’ (“sobering-up station”) he stressed the importance of doing something to put an end to massive alcohol consumption among workers. There were two departments in a vytrezvitel’: one – for alcoholics and the other – for heavily-drinking parents. The staff consisted of only two people – a doctor and a driver, who went round the city searching for drunks.

The key remedy for drunkenness at that time was rassol – a mixture of salt, water and spices.  The mechanism of its healing action is very simple. When a person drinks, the alcohol causes dehydration, which leads to splitting headaches and an inability to work. The main advantage of rassol is that it contains vitamins, which help the body retain water, and stabilize the work of the heart and muscles.

The example of Dr. Archangelsky was followed by authorities in other areas of the country. By 1910, there was at least one vytrezvytel’ in each regional center of the Russian Empire. In 1913, Fyodor Archangelsky received Russia’s Badge of Honor at a regional exhibition in St. Petersburg.

Unfortunately however, the vytrezvitel’ became rather popular among heavy drinkers – they now knew they had a place where their hangover would be removed - free of charge. Some stations even had a phonograph to put people in a cheerful mood. For many workers, the vytrezvitel’ became the place to be after a drinking binge. In 1913, to reduce the number of heavy drinkers, authorities decided to charge for the services of the sobering station: 50 kopecks a month (there are 100 kopecks in one rouble).

Right after the 1917 Revolution, the need to sober people up was not a priority for the Soviet State. Only later, in the 1930s, during the years of Stalin’s industrialization, local authorities started to think about the need to sober up heavily drinking workers. The first Soviet vytrezvitel’ was set up on November 14, 1931 in the center of Leningrad, now St. Petersburg, on Marat Street. Witnesses said the sobering-up procedures at the first Soviet stations were less generous than in the times before the 1917 Revolution. The pleasant atmosphere of older times was replaced by chilly rooms with thin pieces of cloth – deemed enough for booze-riddled addicts to sober up – later on, the beds were equipped with pillows and blankets. Another feature of the Soviet vytrezvitel’ were cold shower rooms to sober up aggressive drunkards – in extreme cases, the police would spray a stream of cold water out of a huge hose. Good old rassol was never used in these new vytrezvitel’ stations.

In 1940, authority over sobering-up stations was transferred from the Ministry of Health to the Ministry of Internal Affairs. This meant that the local police were in charge of collecting heavy drinkers and sobering them up with the help of medical workers. Local authorities introduced their own rules and regulations – ministerial decrees on setting up sobering-up stations were considered “classified information”.  The peak of vytrezvitel’ activity came in the times of Nikita Khrushchev  and Leonid Brezhnev . If a person was taken to a sobering-up station that fact would not remain unnoticed– the staff would send an official note about the incident to the workplace. For Communists, this could lead to expulsion from the party, which automatically meant losing one’s job.

There was an article in Russia’s Administrative Code which stated that a “person should not appear in public places in a condition which insults human dignity”. One could be fined or be sentenced to 15 days’ confinement with community service. But even now, many lawyers find the definition of “an insult to human dignity” pretty vague.

The vytrezvitel’ was also one of the main tools used to combat alcohol consumption in the 1980s, in the middle of the Prohibition campaign initiated by Mikhail Gorbachev . Nowadays, the process of sobering-up is regulated by a special decree of the Ministry of Internal Affairs, adopted in 1985 and updated in 1991.

According to this decree, a police patrol of two servicemen is in charge of picking up drunks from the streets of cities. They are supposed to drive around in a car with a sign that says “Special Medical Service”. The patrol is forbidden to take part in family quarrels – if a drunken husband and wife are beating each other up outdoors, the police can’t touch them. Another no-no for the patrol is taking heavy drinkers home – the vytrezvitel’ is the only way to go.

As soon as a person gets to a vytrezvitel’ he is examined by a doctor – it is necessary to determine the degree of intoxication. Special attention is paid to patients with injuries – after the sobering-up procedures, these people are taken to hospital. After the medical check-up, police make up an official protocol and search the person. All this is followed by a shower, then the person is taken to a cold room with beds: sometimes these are boat-shaped – this way, drunken people are less likely to fall out of bed.

There are separate rooms for men and women. If a European or American person gets drunk and turns up in a vytrezvitel’, he receives special treatment – no wonder some foreigners enjoy the experience and say they would like to go back. Sometimes, sober foreign tourists get excited when they see the car with window bars and the “Special Medical Service” sign – some are even prepared to pay the policemen to have a ride inside.

But for citizens of Mother Russia, it is no walk in the park. After they sober up, they have to pay a fine (or be given a bill if they have no money).  In some cases, the administration of the vytrezvitel’ sends letters to their workplace - no wonder people try to bribe the police to avoid the station.

People who have gone through these procedures usually complain that the police rob them when they are drunk. That’s why experienced drinkers usually advise people to hide their money when they are in danger of being taken to a sobering-up station. During the police search it is sometimes wise to declare that you have money on you and insist that this information should be written down in the protocol (if you are sober enough, of course). It is also strongly recommended that you record your state of intoxication in the protocol – otherwise the police may do it for you.  It is also recommended to stay calm and not provoke the police – they have been known to breach their rights and beat up aggressive guests.

The price for sobering-up services varies depending on the region – from the equivalent of 2 to 20 US dollars a night. If the sum is too big, you may pay it by installments.

After you’ve been released, you can always go to hospital for an independent medical checkup, and if the results show that you were not intoxicated when you were taken away by police, you can sue the officers for illegal actions. The police do not exactly like it when this happens – that’s why they began to close down such institutions to save money.

Between 1990 and 2006, the state halved the number of sobering-up stations in Russia. In Latvia, the last vytrezvitel’ was closed down in 2002. Some, particularly working-class men say they are really sorry about this. The reason given is lack of staff - few people want to work as drivers, whose job is bringing drunken people to the sobering-up station.

When the last sobering-up station was closed in the town of Vladimir, 140 miles from Moscow, many said they were really sorry. One worker said: “If I get drunk and lie down on a bench in a city park, who will take care of me? Most people are indifferent – they would not bother”. The chairman of the city parliament disagreed: “A thief should be put in jail, a sick person should be taken to hospital, and a drunk person should treat himself with rassol in his own kitchen”.

So what is a vytrezvitel’? Some activists say that it is a violation of human rights, because in many countries a person can’t be stripped and searched without the permission of the procurator’s office. There have been cases when vytrezvitel’ patients were beaten heavily, but nowadays most such cases are made public. On the other hand, many view the vytrezvitel’ as a means to save drunks from death – which is a humane act.

For many people, the vytrezvitel was part of Soviet culture. At the beginning of the 1970s, writer Vasily Shukshin  wrote a play about a sobering-up station called And in the Morning They Woke Up. It is a set of conversations between people of different class and profession, that take place in a vytrezvitel’. The play is still running at Moscow’s Pushkin Drama Theatre.

Zastoy Two and a half decades of stagnation period during Leonid Brezhnev's leadership preceeding the Perestroika.