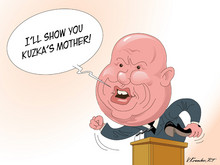 The phrase “I’ll show you Kuzka's Mother!” (or in Russian “Ya Pokazhy tebye Kuzkinu mat!”) is a Russian idiom that is generally understood as a threat.  A phrase that is quite old, it has baffled many translators and students of Russian culture as to its exact meaning.  It even gained international notoriety in the 1960’s as a favorite catch-phrase of the then-Soviet leader Nikita Khrushchev who employed it in his United Nations address, enjoying how it would baffle his translators when they attempted the awkward phrase in English.  While it can most easily be translated as “I’ll show you what’s what”, legend has it that Khrushchev would smile as his interpreters would sometimes translate the phrase literally into English, watching the furrowing brows of his American counterparts as they desperately tried to understand who Kuzka was, and what his mother had to do with international relations.

There are many different versions of the origins of the phrase.  According to one version, Kuzka is actually the name for a strain of Scarab beetle, notorious for destroying the grain crops it infests.  The life-cycle of the beetle includes two hibernation periods in the soil, where the eggs can be found.  In this sense, to show someone these eggs or Kuzka’s Mother would be a warning sign to a farmer, suggesting his crop was in danger.  Therefore, according to this version, the phrase has its roots in ancient Russian serfdom.

According to another version, a Kuzka was a kind of whip that grooms would stuff in their boots on their wedding day in the Kuzminki district of Moscow as a symbol of power over their fiancée in the marriage.

Another tale tells us of the mythical mother of an angry house-spirit, or poltergeist by the name of Kuzka.  Kuzka’s mother traditionally lived behind the stoves of old houses, frightening away anyone if she were to appear.

Still another version tells us that the phrase was in fact derived from a real, living woman; the mother of a certain young man named Kuzma.  Apparently, Kuzma’s mother was notorious for being a difficult and trying individual.  Therefore, to show or introduce anyone to Kuzma’s mother was to threaten them with an unpleasant confrontation involving a demanding and difficult woman in a position of power.

Whatever the phrase’s actual origin, however, it took on new life in international relations during the Cold War, as part of Nikita Khrushchev’s personal arsenal of theatrics when dealing with the West.

Kuzka’s mother in the Cold War

While the phrase is generally a threatening one, it can also be used in a light-hearted and playful manner.  However, during the Cold War, the Russian idiom took on an entirely new meaning.  Nikita Khrushchev, Soviet leader from 1953 to 1964, was well known for his theatrics in politics.  He apparently first used the phrase when speaking to Vice President Nixon at the first American World’s Fair Exhibition in the Soviet Union – ссылка на кухонные дебаты в дне истории in Moscow in 1959.  It was at the American exhibition depicting the luxuries of a typical American home that Khrushchev and Nixon began to argue about government.  The American exhibition depicted dishwashing and laundry machines, televisions, refrigerators: elements of every day American life that many in the Soviet Union did not even know existed.  The vexed Soviet leader stated that this lifestyle was unnecessary to the true proletariat, and that in the end, the Soviets would catch up to the Americans and “Show them Kuzka’s mother!” greatly bewildering the translators and the Americans present, as they tried to understand exactly what the Soviet leader meant.

Realizing the trouble the phrase gave translators, Khrushchev continued to use it, most famously at the 15th assembly of the United Nations in 1960.  During his impassioned speech, Khrushchev repeated the phrase, but this time the interpreters translated it differently, borrowing another phrase that Khrushchev was famous for using, “We will bury you”.  This translation of the idiom gave it a distinctly aggressive and threatening tone, instantly raising the specter of an impending atomic war with the United States.  Ever since that famous translation, “Kuzka’s Mother” became a metaphor for the atomic bomb in all the following Cold War crises.

Where is Kuzka’s mother today?

Today, the phrase with such a rich history is not encountered as often as it once was. However, if used, the phrase instantly conjures up comical associations with Khrushchev and is generally used humorously. However, if you find yourself in a situation where a Russian offers to “show you Kuzka’s mother”, try to be sure just how serious they really are!