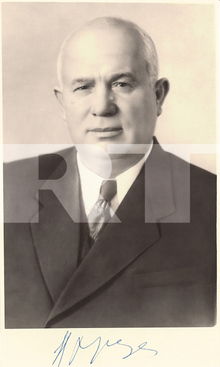 
Nikita Khrushchev was born in 1894 as the son of a coal-miner, in Kalinovka, a village near Russia’s border with Ukraine. He started working at an early age, first as a shepherd, and then at factories and coal mines in Eastern Ukraine. Even before the October Revolution, Khrushchev had become active in workers’ organisations and joined the Bolshevik Party in 1918, serving in the Red Army during the Civil War.

After the war he studied at a technical institute in the Ukrainian mining and industrial centre of Donetsk, and it was there that he embarked upon a political career. In 1929, Khrushchev moved to Moscow to enter the Stalin Industrial Academy.

Climbing up the political ladder


He soon began full-time party work, progressing through the ranks to become the first secretary of the Moscow City Party Committee, a traditional proving ground for the Communist Party’s rising stars. He managed to impress when overseeing construction of much of Moscow’s subway system, and in 1939 became a full member of the Politburo, the highest decision-making body of the Communist Party.

Khrushchev’s rise to power came during Stalin’s bloody purges of the 1930s. During those years he was a staunch Stalin supporter, taking part in his repressions. During World War II Khrushchev served as a political commissar in the army, spurring the resistance of civilians while liaising with Stalin and top party members, and acting as political advisor during the crucial defence of Stalingrad (now Volgograd) that marked the turning point of the war. 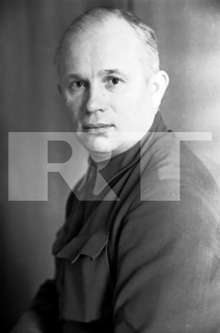 He went on to work in Ukraine, but was soon recalled to Moscow, and after Stalin’s death in 1953 he won a power struggle among the would-be successors.

Khrushchev’s leadership marked a dramatic change in the Soviet Union. In 1956 he kicked off a campaign of “de-Stalinisation”. His secret speech to a closed session of the 20th Communist Party Congress, denouncing Stalin’s dictatorial rule, caused a storm. The so-called “Khrushchev’s Thaw” followed, meaning less political control and censorship, and more openness and a rise in living standards. The USSR also saw the release of millions of political prisoners.


Khrushchev also gave the world the KGB. Established on March 13, 1954, a year after Stalin’s death, the State Security Committee known for its Russian abbreviation KGB (КГБ), became one of the USSR’s most vital agencies and an internationally-known brand name. 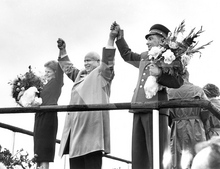 Meanwhile, the USSR was setting scientific and technological records. In 1957 the first artificial satellite, Sputnik 1, was launched. There followed a whole string of firsts: Yuri Gagarin became the first man in space on April 12, 1961;Valentina Tereshkova was the first woman in space two years later; and soon after Aleksey Leonov completed the first spacewalk.


Persecution of the Church


But Khrushchev’s “thaw” wasn’t without a dark side. He renewed a campaign of persecution against the Russian Orthodox Church, publicly promising to show the last remaining priest on Soviet television. During his time in office, the USSR also suffered a major agricultural disaster.


An ambitious initiative, known as the Virgin Lands Campaign, was started in 1954 to open up vast tracts of unsown steppe in Kazakhstan and Russia’s Altay region. Initial successes of the programme rapidly turned sour. In a failed attempt to resolve the USSR’s agricultural troubles, Khrushchev ordered the widespread planting of maize, and became known as kukuruznik – “the maize enthusiast”, derived from the Russian word for maize – kukuruza.


Khrushchev’s leadership was also marked by a series of high-profile international crises. While championing change, he wouldn’t tolerate dissent. Khrushchev sent in tanks to Budapest, ruthlessly suppressing a 1956 Hungarian uprising against Soviet-imposed policies.

There was also the shooting down of an American U2 spy-plane over the Soviet Union in 1960, the building of the notorious Berlin Wall in 1961 and the Cuban Missile Crisis in 1962, which brought the world to the brink of nuclear war.


Yet, Khrushchev also attempted to pursue a policy of co-existence with the West. This shift in doctrine and his rejection of Stalinism led to a split with Communist China in 1960.

The shoe and "Kuzka's mother" 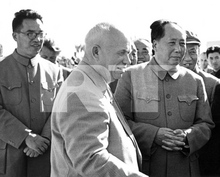 Nikita Khrushchev was notorious for his eccentric outbursts. Regarded as intelligent and cunning, but lacking education, he regularly humiliated the Soviet political elite with his gaffes.

The infamous shoe-banging incident became one of the 20th century’s iconic symbols. It occurred in 1960 at arguably one of the stormiest United Nations sessions. After the Philippine delegate accused the USSR of imperialism in Eastern Europe, the Soviet leader caused uproar when he pulled off his right shoe and banged it on his desk.

He also threatened to show the U.S. a Kuzka’s mother (Kuzkina mat). A major headache for translators, the famous Russian idiom equates roughly with the English “We’ll show you!” Khrushchev apparently deliberately used the phrase to have a laugh at the interpreter’s expense.


Another story has it that the threat he implied was a very concrete one – a Soviet hydrogen super bomb being developed at the time. Because of the incident, the weapon is sometimes referred to as “Kuzka’s mother”.

By 1964, Khrushchev’s blunders and perceived failures had alienated much of the party elite. He was ousted by opponents led by his own protégé, Leonid Brezhnev. In retirement, Khrushchev was fond of reading and gardening.


He died of a heart attack in September 1971 in Moscow. While most Soviet leaders before and after him were buried by the Kremlin Wall, Khrushchev was denied a state funeral and laid to rest at Moscow’s Novodevichy Cemetery.

For more information on the leader please check the following RT documentary .