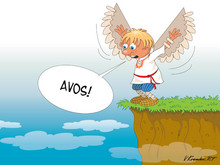 In Avos’ We Trust

Russian Avos’ is one of the most crucial elements of the Russian mentality and national character; it is the habit of relying totally on chance, on good luck, on good fate in the hopes that everything will turn out well, even if there is no reason for that to happen. It is to hope that negative consequences will somehow be avoided and things will sort themselves out.

In the Avos’ philosophy life as something unpredictable and predestined – and a person is unable to change anything no matter what he does.

This concept is close to the idea of predetermination, or destiny – something also believed to be intrinsic to the Russian character.

As a particle, "Avos'" is close in meaning to "hopefully" or “let's hope to God.” When used as a noun, "Avos’" means "hit or miss," "hope against hope" or "something done under risk and in hopes of a good result.”

As a particle Avos’ resembles a masculine name, in ancient Russia people started writing it with a capital A and seeing Avos’ as a pagan deity symbolizing a lucky chance - something which boosted its popularity.

But while there are many who claim “Avos’ is all our hope,” skeptics warn “Avos’ will not lead to anything good” or “Avos’ – is a fool, he will give you away.”

In “Cancer Ward,” a novel by Russian writer Aleksandr Solzhentszin, a 16-year old patient, Dyoma, refuses an operation saying, “Hope it’ll be resolved on its own” with Avos’ in the original text. His more realistic friend opposes him claiming, “It’s stupid to think that you can build a bridge on Avos’.”

In today’s Russia the word Avos’ is not as popular as it used to be; people use it rarely and usually – with a nuance of a self-irony. Some say this is a sign that Russian society is becoming more realistic and more self-confident.