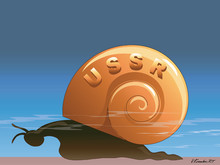 Stagnation of the Soviet Union

Zastoy has several translations: “the period of stagnation,” “the Brezhnevian stagnation,” “the era of stagnation” and more. Soviet authorities called it “the time of developed socialism” while in reality it was a period of a socio-economic slowdown that began during the rule of Leonid Brezhnev in the 1960s and ended, according to some experts, only several years before the fall of the Soviet regime.

The start of zastoy was marked by two events. First, the Sinyavsky-Daniel trial – a trial against Russian writers Andrey Sinyavsky and Yury Daniel between 1965 and 1966, who were accused of publishing anti-Soviet propaganda in foreign editorials and were sentenced to five and seven years of forced labor.

The second event was the so-called Prague Spring – a period of political liberalization in the former Czechoslovakia, which ended when Soviet tanks invaded the country, putting a halt to reforms. Both events showed the world that any serious criticism of communism, Soviet leaders and Soviet literature would be taken as anti-Soviet propaganda.


Officially zastoy was first mentioned by Mikhail Gorbachev in his speech during the twenty-seventh conference of the communist party in 1986. Gorbachev became the first communist leader to admit that stagnation had become a part of Soviet society, both economically and socially.

According to the Encyclopedia Britannica, during the zastoy period the USSR was actually at its most developed state; it reached nuclear parity with the United States and was recognized as a superpower, the Soviet middle class increased and the accessibility of housing, medicine and education was higher than ever.

At the same time the USSR’s dependence on exportation of natural resources revealed the need for economic reforms – something that was ignored by Soviet authorities. This led to a significant reduction of growth in most of the other sectors of the Soviet economy by the mid-1970s. The high tech industry, the quality of products and the farming industry all suffered a hit while corruption rose and anti-communist thinking was banned by the law. This caused many Soviet writers, actors, musicians, athletes and scientists to escape to the West.

The beginning of the 1970s brought a slight thaw in Moscow’s relations with Washington. The two superpowers signed several deals aimed at limiting the amount of strategic offensive arms on both sides. But the Soviet Union’s invasion of Afghanistan in 1979 revived the tensions of the Cold War.

Concerning other members of the soviet camp, Leonid Brezhnev initiated the concept of “limited sovereignty.” It allowed the USSR to pressure - and even invade - those Soviet countries which tried to conduct their own policies. In 1968 Brezhnev ordered the occupation of Czechoslovakia (“the Prague Spring”) and some sources say the Soviet Union was preparing a military intervention in Poland in 1980. Meanwhile Moscow continued to try and increase its influence in other countries (Nicaragua, Ethiopia, Angola, Vietnam, Afghanistan etc.), which was becoming a heavy burden for the Soviet economy.

Brezhnev’s rule brought another social problem – alcohol addiction. Around 1965 the death rate among Soviet citizens began to grow while birth rates declined. In the period between 1960 and 1980, the number of births fell by 25 per cent while mortality increased by 47 per cent. This was accompanied by an increase in alcohol consumption and many doctors directly link the two. At one point during the zastoy period, around 40 million soviet people were thought to be addicted to alcohol – every seventh citizen.

However some historians say the USSR wasn’t the only country with this problem. About a decade after the end of the Second World War, when most of the “wounds” were healed, alcoholism became an important issue in the whole of Europe and the United States.

History repeats itself. Almost twenty years after the collapse of the USSR, some analysts hint that zastoy may be making a comeback. Not in its Soviet definition of course, but in a new post-soviet one. The communist ideology is not at the wheel of power anymore; capitalism is. Record-high oil prices of the past several years have strengthened the Russian economy.

The socio-economic turbulence of the 1990s is over and billions of so-called “oil-dollars” now flood the economy, affecting almost all parts of society. The middle class has increased and ordinary Russians have discovered credit and mortgages. Moscow has become one of the most expensive cities in the world with office buildings, luxury cars and expensive boutiques.

But the global economic crisis has revealed Russia’s economy is still highly dependent on the price of oil - if it falls, the income of the state budget declines as well. The government has managed to collect a stabilization fund to protect the economy, but it’s not known how long the crisis will continue and if this money will be enough. Perhaps, the current structure of the economy is in need of reform once again. The question is – will the authorities learn from the mistakes of the past?