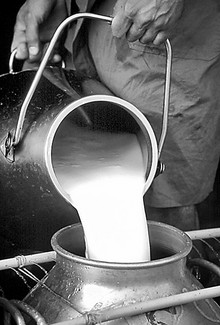 All covered, no spills

A bidon, is a kind of churn, usually metal, used for transporting milk, water, sunflower-seed oil, technical fluids or any other liquid. It’s the Soviet predecessor of plastic containers, and ensured minimum spillage during transportation.

During Soviet times bidons were quite a frequent sight – people used them to carry milk or kvas on tap. Every self-respecting family owned a bidon – a three-liter aluminium, or enamled can that was a measure of everything liquid, be it sour cream, beer or kerosene. People did not actually buy three liters of milk – they bought a bidon of milk.

When spending summer in the countryside parents usually sent their children to the nearest local farmer to buy fresh milk or homemade farm cheese and fresh eggs. Sometimes, farmers with huge bidons came to sell their goods in a village center. Children and elderly people would quickly form a queue – each clutching a bidon and money. Fairly often kids would put the money their parents had given them to pay for the dairy produce at the bottom of their bidons and forget to take them out. It made the farmer’s milk rich not only in calcium. 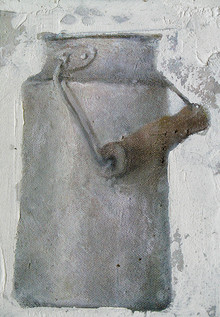 Bidons usually had a lid, which could be an independent object or was attached to the container. The size of bidons ranged from small, cozy one-liter specimens to huge 55-liter containers used mainly for industrial purposes.

If a country house had no well or any other water source, people went to a public well with several five-liter bidons. As they were quite heavy and inconvenient to carry a special cart was invented. It was made of several wheels and tubes soldered together.

Despite serving mainly for transportation purposes, bidons could also be quite stylish accessories - enameled, made of aluminium or plastic they were decorated with motley ornaments or flowers. The most popular bidons were plain white enamled with wooden handles and bright red with big white dots.

Bidons can still be seen in Russia today, but they are not no longer in great demand. After all their practicality, they did have one substantial shortcoming – the lid did not screw on, and therefore one had to always ensure it was in an upright position. Bidons have long been replaced by plastic bottles which are ligher, easier to carry and store, and most importantly they have a lid that tightly screws on.