Of Russian origin: The GULAG

GULAG is the Russian acronym for The Chief Administration of Corrective Labor Camps and Colonies of the Soviet Secret Police and is nowadays a vivid symbol of the lawlessness, slave labor and tyranny of the Stalin era.

However, the system was first established earlier - under Vladimir Lenin - as a progressive alternative to prison during the years immediately following the Bolshevik Revolution. Although it functioned from 1919 to 1960, the Gulag generally denoted the entire penal labor system in the USSR.

Vast chains of camps of all forms and varieties (labor camps, punishment camps, criminal and political camps, women's camps, children's camps, transit camps) were located mainly in the remote regions of Siberia and the Far North. They made significant contributions to the Soviet economy in the Stalin period and served as a source of free labour for the great economic projects.

The enemies of the state and the criminals

The Gulag reached its peak after 1929 during the rule of Joseph Stalin , who used it to maintain the Soviet state by keeping its populace in a constant state of terror. By 1934 the Gulag had several million inmates. People would spend their sentences here, instead of ordinary prisons. Among the camp population were felons, such as robbers, rapists, thieves, and murderers. If one was to so much as steal a pound of potatoes, he or she could be sentenced to up to ten years in the Gulag.

In addition the Gulag also held political prisoners, those who were considered enemies of the Soviet regime; anyone who stood out as a small threat was sent to a penal camp. Many innocent people were sentenced to the Gulag for minor “crimes” such as coming to work late three times (considered sabotage) or telling a small joke about a government official (punishable by up to 25 years).

The majority of the prisoners were the victims of severe legal campaigns where simple rule breaking could mean a sentence of over five years. Majority of the political prisoners who were sent to Gulag prison camps were innocent and weren't given as much as a trial.

The transportation methods to the Gulags were often even more disturbing and painful than the camps themselves. Most long journeys began at the railroad station. However, prisoners were not loaded onto trains at the station in full public view; they were loaded at sidings down the track, away from public glare. It was done secretively - just as the process of arrest late at night.

It was usual for up to sixty or more people to be crammed into one carriage, which was constructed from wooden planks and had a few rows of horizontal boards to sleep on. There was no illumination, and rats and vermin abounded. No matter the weather, the captives were only allowed to wear the clothes they were arrested in.

The grinding machine of slave labour

Conditions in the camps, for those who survived the trip, were extremely harsh. Prisoners received insufficient clothing and inadequate food rations which made it difficult to endure the severe weather and the long working hours. As a result, the death rate from exhaustion and disease in the camps was enormously high.

But, to fulfill the camps' economic goals, more and more prisoners were required, which accounts for the rapid increase in camp populations in the 1930s. Eventually, every Soviet Secret Policeman was assigned a certain arrest quota in order to ensure a large enough labor force in the Gulags.

In order to achieve this quota, the Secret Police simply fabricated cases against ordinary, innocent people (vividly described in Aleksandr Solzhenitsyn’s short story “One Day in the Life of Ivan Denisovich”).

From camps to the war front

During World War II, Gulag populations declined sharply, owing to the mass release of hundreds of thousands of prisoners who were conscripted and sent directly to the front lines (often into penal battalions, who were thrown into the most dangerous battles and experienced high casualty rates).

After the war, the number of inmates in prison camps and colonies again rose sharply, reaching approximately 2.5 million people by the early 1950s. The main reason for the post-war increase in the number of prisoners was the tightening of legislation on property offenses in the summer of 1947. The result was hundreds of thousands of convictions to lengthy prison terms, often on the basis of petty theft or embezzlement.

A significant minority of the inmates were Balts and Ukrainians from lands newly incorporated into the USSR, as well as Finns, Poles, Romanians and others. Prisoners of war, in contrast, were kept in a separate camp system.

Economically, camp output almost never compensated for the cost of running the Gulags. Most of the felled trees rotted and never reached the lumber mills; many of the railroad lines and canals the prisoners built were never used; and most of the construction was hopelessly shoddy. The prisoners’ work was typically unskilled, manual, and economically inefficient.

People worked up to 14 hours a day cutting trees, mining, and performing other physically exhausting activities. When they were not working up to scratch, they would be called to line up in the forest and then shot down by machine guns. This cruel camp life lingered on until eventually, the entire Gulag system was deemed inefficient and abandoned.

Not only had the USSR not gained anything economically from the camps, they were also responsible for the deaths of millions of prisoners (estimates vary from 1.6 million deaths, officially documented by the Soviet Secret Police - NKVD - to 15 million people, depending on the source).

After Stalin died in 1953, the Gulag population was reduced significantly. The release of political prisoners started in 1954 and became widespread. It coupled with mass rehabilitations after Nikita Khrushchev' s denunciation of Stalinism in his Secret Speech at the 20th Congress of the Communist Party in February 1956. By the end of the 1950s, virtually all "corrective labor camps" had been dissolved. Officially, the Gulag was liquidated by the MVD (Soviet Internal Affairs Ministry) Order 20 of 25 January 1960.

Still, forced labor camps continued to exist on a small scale right up to the Gorbachev period, when the government opened some camps to scrutiny by journalists and human rights activists. With the advancement of democratization, political prisoners and prisoners of conscience all but disappeared from the camps. 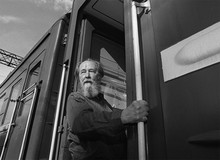 Though very well known inside the Soviet Union, the very name Gulag became familiar in the West only after the publication of Aleksandr Solzhenitsyn's Nobel prize winning novel The Gulag Archipelago (1973) which compared the scattered camps to a chain of islands.

His previous book on the subject, One Day in the Life of Ivan Denisovich, about a typical day of a Gulag inmate, was originally published in the most prestigious Soviet monthly, Novyi Mir (New World) in November 1962, but was soon banned and withdrawn from all libraries. It was the first work to describe the Gulag as an instrument of governmental repression against its own citizens on such a massive scale.

Having affected millions of people in the USSR, it’s not surprising that the Gulag has had a major impact on contemporary Russian thinking. Obviously, when millions of people get through the camps and then rejoin society, the latter can’t avoid being influenced by that “other” subculture – its mentality, way of thinking, habits and language.

Hundreds of prison words and expressions nowadays have become an inseparable part of everyday speech. For instance, today people in modern Russia often say “Zvat’ NIKTO, familiya – NIKAK” (“My name is NOTHING, my family name is NOBODY”), something prisoners said about themselves when being taken to the Gulag.

Another example – the expression gnut’ paltsy or paltsy veerom (to “spread” the fingers of one’s hand) – prisoners literally used this special finger sign to show protest in resisting various works in prison. Today people use this expression, and even sometimes ironically show this sign, to describe somebody who doesn’t want to do something or wants to position oneself as being “special” and “above” everyone else.

The Gulag experience also became an important part of modern Russian folklore. Many songs by the authors-performers known as the "bards," most notably Vladimir Vysotsky and Alexander Galich, neither of whom ever served time in the camps, described life inside the Gulag and glorified the life of the so-called zeks (slang word for “prisoners”). Words and phrases that originated in the labor camps gradually became part of the Soviet/Russian vernacular in the 1960s and 1970s.

In contemporary Russian art one can often come across the “cultural heritage” of the Gulag while listening to the so-called “Russian chanson” - the genre, which was born in the early 1930s when the Gulag became a significant part of Soviet life. However, even today it is still one of the most popular trends in Russian pop-culture.

Such musicians as Mikhail Shufutinsky, Mikhail Krug, Aleksander Novikov, Arkady Severny and others whose songs can be heard not only in restaurants and pubs, but also in public transport, shops and simply on the streets all over Russia, also tackle the miserable life of prisoners and injustice of their fate. However, they are not easy to understand for a non-native listener due to the vast use of specific prison slang and images.

The writers either describe the life of the prisoners in the Gulag or portray those who came out of prison and tried to adapt to everyday civilian life (there is even a special Russian word for that – grazhdanka), massively using prison words, images and expressions.

The memoirs of Solzhenitsyn , Alexander Dolgun, Varlam Shalamov and Yevgenia Ginzburg, among others, became a symbol of defiance in Soviet society. These writings harshly chastised the Soviet people for their tolerance and apathy regarding the Gulag while providing a testament to the courage and resolve of those who were imprisoned.

Portyanki Service in the Russian Army for a young man is a period which is connected with several rituals and traditions. One of them is how to live wearing portyanki for 2 years.