The history of the CSKA dates back to 1911. Officers in the army of the Tsar who loved skiing founded the Society of Ski Sports Amateurs. Later on they began to develop other sports and games. The club stopped its activities due to the 1917 Russian Revolution. After the Civil War the Red Army began to encourage sports activities in military units – especially in the cavalry. Coincidentally, the club’s first stadium was located at the former royal stables, which explains the nickname of the club - koni (horses). Army athletes excelled in football, track-and-field and swimming.

In 1928 sports activities of the Red Army were united under the name of the Red Army Hobby Club (CDKA – Central House of the Red Army). The name was changed several times up until 1960, when the club took the name of CSKA. Since then the club has never changed these four letters, which later became one of Russia’s top sports brands. Over the decades the “red-and-blue-squads” (colors of CSKA) have been great examples of team strategy in many areas of sport. 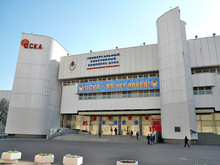 The club faced severe competition from other sports societies – “Spartak” (the group of trade unions) and “Dynamo” (the society of police forces and special services). For CSKA it was very easy to attract talented sportsmen – when Red Army bosses saw a gifted young man they immediately enlisted him so that he could play for the club. The tradition remained in place until the end of the 20th century and is one of the main reasons why fans of other clubs do not like CSKA.

In 2009 the Central Sports Army Club abandoned the practice of calling up sportsmen to do their military duties. But, irrespectively, CSKA is still a major brand in football, ice hockey and basketball.

Right after World War II, at the end of the 1940s, nobody could beat CDKA. It was nicknamed “The Lieutenants’ Team.” The most talented footballers of the country were immediately given this rank after they joined the squad. Under the leadership of their top scorers Grigory Fedotov and Vsevolod Bobrov they captured three titles in a row from 1946 to 1948. These players formed the core of the Soviet national team that made its international debut at the Helsinki Olympics in 1952. But this remarkable event turned into disaster. In the playoffs the Soviets lost to Yugoslavia 1-3, a disgrace Joseph Stalin could not tolerate – Yugoslavia was a country that did not follow Moscow’s line of development and the defeat led to worsening relations with Yugoslav leader Tito. Following the Olympics “The Lieutenants’ Team” was disbanded because of its “poor performance.” Some researchers say that the boss of the police forces and the patron of the rival “Dynamo” team, Lavrenty Beria, was behind this decision (Beria was one of the masterminds of Stalin’s purge in 1937). It was possible to get the army team back together only after Stalin’s death.

A typical feature of CSKA football was its exceptional defensive teamwork. One of the defenders – Albert Shesternev – was one the best “backs” during two World Cups – 1966 in England and 1970 in Mexico. After winning the national title in 1970, the quality of CSKA’s play started to decline. The reason – extreme infatuation of the country’s top military leaders with ice hockey – they did not care much about football. In the middle of the 1980s the team left the top league. But several years later the comeback was amazing. In the 1990s CSKA clinched second place in the top league during their comeback season. And in 1991 they became the last champions of the USSR thanks to the coaching talents of Pavel Sadyrin and the great game organization of midfielder Igor Korneev (who is now an assistant of the Dutch coach Guus Hiddink of the Russian national football team). After the collapse of the USSR many top players were lured to Europe by big contracts. But it did not stop young CSKA players from beating FC Barcelona in the 1992 Champions League tournament. However, what followed after that is a decade of mediocre results.

In 10 years the team survived the deaths of two young leading goalkeepers. In 1991, right after the victory in the USSR Cup Final, Mikhail Eremin was involved in a car accident and died six days later. In August 2001 CSKA hopeful, Sergey Perkhun, received a fatal brain concussion after a clash with a striker of the opposing team. For 10 days the best doctors in the country tried in vain to save him. Sergey Perkhun remains the only Russian football player to die of an injury sustained on the pitch. Both men were 23 years old.

In 2001 the manager Evgeny Giner purchased the CSKA football branch and made it a professional entity and no longer a subsidiary of the main Central Army Sports Club. Now its official name is “Professional Football Club CSKA” (PFC CSKA). In the past decade the team has captured three national titles (2003, 2005, 2006) and five national cups (2002, 2005, 2006, 2008, 2009). But the biggest achievement is the victory at the UEFA Cup in 2005 – the second largest European club tournament. With the strong hand of Coach Valery Gazzaev and the talents of goalkeeper Igor Akinfeev, midfielder Yuri Zhirkov and Brazilian forward Vagner Love the team beat Sporting Lisbon in the finals on their home ground in Portugal. The score was 3-1. Now the team is a “frequent guest” in the European Champions League. In 2009 the club successfully sold Yuri Zhirkov to Chelsea. 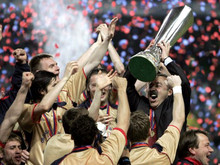 Many say that CSKA is on the right track to becoming one of the top clubs in Europe. In December 2009 they qualified for the Champions League playoffs – the most prestigious European club tournament.

The hockey team was formed right after World War II, in 1946. The remarkable thing is that some of the players were part of that famous football “Lieutenants’ Team,” including Vselvolod Bobrov – they played football in summer and hockey in winter. CSKA won 32 titles of 44 USSR national championships. And this was not only due to the successful selection of the strongest players from all over the country. CSKA was the favorite team of Leonid Brezhnev, the Chairman of Communist Party Central Committee who was in power from 1964 to 1982. It was a “base team” for the USSR national ice hockey squad. However, one can’t discard the coaching talents of Vsevolod Bobrov and Anatoly Tarasov in the 60s and 70s, as well as of Victor Tikhonov in the 70s and 80s.

The real test for the team was its first tour in Canada and the US in December 1975 – January 1976. The game between CSKA and the Montreal Canadiens on 31 December has become one of ice hockey’s all-time classics. 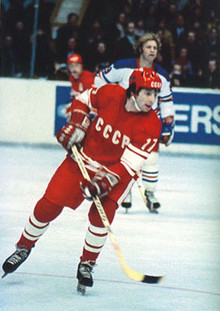 The “Red Army” (the name used for the Soviet team on electronic scoreboard of Montreal’s stadium) managed to recover after the Canadiens’ 3-1 lead thanks to forward Valery Kharlamov and goalkeeper Vladislav Tretyak who “worked wonders.” The game was broadcast nationwide in the USSR on the afternoon of 1 January. For many men it was a sort of a New Year’s present.

Later on in this tour CSKA crushed the Boston Bruins 7-3 but lost to the Philadelphia Flyers 1-4. That game, however, caused great havoc in the Soviet press. CSKA’s Valery Kharlamov was severely hit by one of the Flyers’ “tough guys” – it was an unusual type of hockey for the Soviet players. So the CSKA coach decided to take the team off the ice. But after they were warned they would not receive the money they were to be paid for the tour, the Soviet players decided to continue the game.

The 1980s brought one of the most powerful lineups - the so-called KLM line. These were the first letters of the last names of leading strikers Vladimir Krutov, Igor Larionov and Sergey Makarov. Together with defenders Alexei Kasatonov and Vyacheslav Fetisov they brought many titles to CSKA and two Olympic gold medals for the USSR. Later on they all had a chance to show their talents in the NHL. Fetisov and Larionov won the Stanley Cup.

However, during this time the CSKA hockey team started to fall into oblivion. Many talented youngsters no longer wanted to play for the army. The NHL was everything they dreamed of. Even the partnership with the National Hockey League’s “Pittsburg Penguins” did not help to correct the situation. Things got better after former CSKA player Vyacheslav Bykov was invited as a coach. Now CSKA is always among the top eight clubs in the league. Bykov won two World Hockey titles with the Russian national team.

Though the hockey team’s budget is smaller than what the football club enjoys, the legend lives on. An increasing number of fans are turning out to watch CSKA hockey games in their small five thousand-seat home arena.

Basketball: “Papa, we’ve made it”

The CSKA basketball squad was also the strongest in the USSR. The man who made this success possible is Alexander Gomelsky, a basketball coach of inferior height. Everyone on the team called him “Papa.” 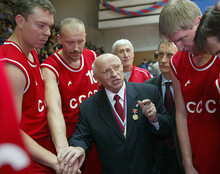 CSKA won the European Champions’ Cup in 1970. However, in the Russian League, the team experienced constant pressure from Lithuanian Team Zhalgiris Kaunas led by the future NBA star Arvidas Sabonis. Though CSKA often won these “great games,” the face-offs between the two teams in the 1980s also had a political context. For Lithuanians the loss to CSKA was a blow to their then-emerging national pride (the author of this article watched the game between CSKA and Zhalgiris in Kaunas in 1989 – CSKA won and the entire Lithuanian town remained quiet for a couple days).

After the collapse of the USSR it was Alexander Gomelsky who set the goal to make the team a profitable enterprise. For this reason “Papa” invited Sergey Kuschenko, a basketball manager from the Urals to build up the Russian dream team with a help of foreign coaches. The team found sponsors to purchase the best players from all over the world. One of them, John Robert Holden, or J.R. as the fans call him, became a Russian national and plays for the Russian team at international competitions, including the Olympics.

CSKA’s goal was to win Euroleague – the most prestigious European club tournament. Hopes were set on the Final Four Playoffs held in Moscow in 2005. But the team did not make it. Half a year later, Papa died. In 2006, in Prague the team won Euroleague. For a month Moscow was decorated with congratulation banners. On the red-and-blue background one could easily read: “Papa, we’ve made it.” A great tribute to a great man. Since then the CSKA basketball team has clinched two more European titles.