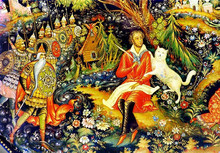 Palekh is a style of Russian folk painting done with tempera paints on small items such as jewelry boxes or powder cases.

Palekh is a type of Russian lacquer art. The name comes from the village of Palekh, situated in the Ivanovo Region, in the European part of Russia. It first appeared at the beginning of the 20th century. The creation of this handicraft style of painting was based on local icon painting and its main features were landscapes and figures reflecting the traditions of the time.

Historically, Palekh was known in Russia as one of the great centers of icon painting. Icon painting was a family occupation and the craft was passed on from generation to generation. After the October Revolution of 1917 and the onset of Communism, religious themes fell into disgrace and many icon painters had to look for other jobs. 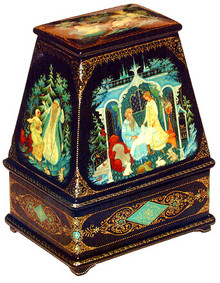 Palekh miniatures first gained recognition thanks to the artists Ivan Golikov and his brother-in-law Aleksandr Glazunov. Their works became extremely popular and their first exhibitions in Europe caused a sensation.

In 1924 seven Palekh artists opened a new page in the history of Palekh manufacturing by founding Old Painting Artel, a type of lacquer art that received worldwide recognition.

Artists usually draw on images from real life as well as well-known characters from folk tales for their miniatures, using bright colors on a black background. From the very beginning Palekh painters made generous use of folk motives but also found inspiration in the poetry of Pushkin, Lermontov, Gorky and others.

The art of Palekh painting is still popular today. The Artistic Fund of Russia regularly holds workshops on the craft and there are many small private studios in the Palekh village. Many painters are trained at the Palekh Art College that was founded in 1935.

Works representing the beauty of this type of folk art can be found in different museums in Russia as well as abroad, in art galleries dedicated to Russian folk art and history. But of course the biggest collection of Palekh works can be found in the State Museum of Palekh Art.

Today in Palekh several dynasties of painters continue the work of their parents and grandparents. Despite great changes in the art of Palekh, fairytale themes continue to dominate. The most popular image of Palekh art has always been - and remains – the fairytale firebird, a symbol of eternal youth and happiness.

Some of the most famous Palekh artists are Vladimir and Natalie Buldakovs, Nikolay Gribov, Yury and Ekaterina Schanitsyns, Vadim Zotov, Anna Kamanina, Nikolay Lopatin, Lyubov Nekrasova and Olga Subbotina. These artists opened a period of renaissance for Palekh Art in the 1980s.

Ponty The behavior of someone attempting to be cool by showing off luxurious or more often pseudo-luxurious accessories.