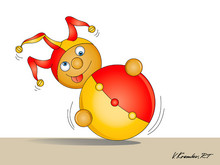 ‘Playing the fool’ in a very Russian way

“Valyat’ duraka” is a Russian colloquial idiom meaning “doing nothing”, “doing something useless”, “goofing off”.

It can also be translated into English as “to fool around”, “play the fool”, “arse around”, “act the goat”; or “pretend not to understand”, “pretend to be stupid”, “feign not to be aware”.

It is very hard to find an appropriate literal translation for the expression “valyat’ duraka”, but if we try, we get something that doesn’t make much sense: “roll the fool around”.

Where ‘Durak’ the fool comes from

The origins of this idiom are unclear. The most popular view is that “durak” here refers to a traditional Russian children’s roly-poly toy, similar to a modern-day Weeble. These were originally called Van’ka-Vstan’ka (Van’ka Get Up!) or “Van’ka Durak” (Van’ka’s an Idiot), where Van’ka is an informal shortening of the male name Ivan. Naturally, it’s hard to find anything more stupid and useless than trying to make a roly-poly doll lie down (valyat’), as it will always spring bolt upright again.

There is another expression with the same origin, “valyat’ Van’ku”, with synonymous meaning, but it’s rare and even more colloquial.

Famous Russian writer Aleksandr Genis once said that “valyat’ duraka”, meaning “to pretend not to understand”, “to pretend to be stupid” is one of many national Russian features: “This very peculiarity gives to the Russian national temper all its wild originality, which can hardly be understood by a foreigner: people in Russia often pretend not to understand things. Probably, it is a tradition. In a country where it has traditionally been considered (not without grounds) that “Woe [comes] from Wit”, only stupid, weak-minded people were not afraid of the authorities.”, RT correspondent