Service in the Russian Army for a young man is a period which is connected with several rituals and traditions. One of them is how to live wearing portyanki for 2 years.

Portyanki (singular – portyanka) are two pieces of cloth used by the soldiers in the Soviet and Russian Army instead of socks. The word sprang up from the Portuguese word which means “a piece of cloth”. The first portyanki appeared together with lapti – the shoes that that were made of the bark of the lime tree. Russian peasants used to wrap portyanki around their feet and then put lapti on. Portyanki started to be worn extensively in the army during the time of Peter the Great, who first saw them during his long stay in Holland.  For the Russian Tsar, portyanki was just another item to make the Russian army look more European. Time went by and the Tsars disappeared, but portyanki stayed with the Russian and Soviet soldiers all the way through their glorious history.

People used to scare would-be soldiers with portyanki before being called up to the service. The translation of the phrase used sounds threatening: “When you wrap portyanki around your leg, you’ll come to realize that life if one tough thing”. The word gets even more negative meaning when your friend asks you for a favor and leaves you no choice to refuse: “Ty mne drug ili portyanka?” (“Are you a friend to me, or just a rag?”)

Until 2008 – the year when portyanki were abolished by the Defense Ministry of Russian Federation – they were worn with the high and quite heavy everyday tarpaulin boots (“kirzovye sapogi”) – another symbol of the Soviet Armed Forces. It usually took time to get used to this heavy footwear and portyanki underneath. Putting this “gear” on was the first thing rookies had to learn at the start of their military career. The first month the whole process is usually torture – the soldier feels his feet sweating and in pain - but then he comes to realize that that the “portyanki technology” is not that difficult to master. All the man has to do is: 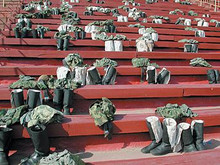 - spread the piece of cloth flat on the floor;

- put the foot closer to the edge of the cloth to wrap the edge around the big toe (the left foot should be closer to the left edge – and the right foot – to the right) ;

- take the side of the rag and wrap it tight around the foot;

- take the back of the rag and wrap it tightly around the leg;

- pull the edge to adjust tightness and bend it behind the rest of the cloth;

- put the tarpaulin boots on.

The most crucial aspect is that one can only wear portyanki that are wrapped tightly. If the soldier doesn’t follow the procedure exactly, he could hurt his feet and get painful blisters. Some of the young slackers wore their portyanki loose on purpose – they wanted to avoid the “hardships of military service”: runs, drills, marches in formation, etc., and spend a week or two doing nothing at the hospital. They had to enjoy these relaxed hospital hours at the expense of their peers’ respect, however, since slackers have always been treated with great contempt.

Another important thing to learn was putting the portyanki on as quickly as possible. The Soviet Army regulations required soldiers to get dressed in 45 seconds. It means that each of them had only 15 seconds to put his uniform on, 20 seconds to put on his portyanki and 10 seconds to join the formation of his platoon.

In the evening the soldier had to place his boots near the barrack and wrap his portyanki around them – just for them to get some ventilation.  On day 6, it used to become more difficult – the sweaty smell would have gone deep into the rag and it was impossible to get rid of it. On day 7 the soldier got his weekly shower and a new pair of portyanki. He threw the old ones away without regret – for some people this ritual meant that another week in the service had gone by and the demobilization order was getting closer. The old portyanki were washed at a temperature of 100 degrees Celsius which killed any dangerous bacteria. 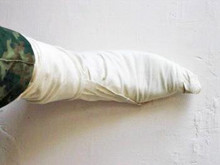 On the last day of the military service – before the soldier put his parade uniform on, his fellow soldiers would rip his everyday uniform into small pieces. For many who went through this ritual the most pleasant thing was to see the fellow “brothers-in-arms” tearing up the portyanki. It was a spectacle that caused everybody to smile.

But later on – after the military duty is done – it’s not that difficult to come across people in villages, hunters, and workers who also wear portyanki. For many rural residents it is an ideal accessory in their everyday outfit.

P.S. The author of this article wore portyanki for 695 days in the army and a couple of times later on when he went out into the Russian woods on a rainy day to pick up mushrooms. He did not experience any health problems because of them, and has lived happily ever after.

The Wanderers An itinerant is a nomad. In Russian culture one very particular group of 19th century artists called themselves the Peredvizhniki, meaning the Wanderers or Itinerants.