The metaphoric use of the Russian word ottepel (thaw) first came into being thanks to the writer Ilya Ehrenburg. In 1951 he published a novel with the same name. As a historic term “ottepel” means the period after the death of Joseph Stalin until the middle of 1960’s, when the many restrictions imposed by the Stalinist regime were either abolished or significantly mitigated, with a new openness to the outside world.  It was a time of economic reform, growth in international trade, development of educational programs and festivals, publishing of books by internationally acclaimed writers, introduction to new trends in fashion, and the chance to take part in world sports tournaments. Many historians connect this phenomenon with the Soviet leader of that era, Nikita Khrushchev.

After the death of Joseph Stalin on March, 5, 1953 fears were voiced that the power in the USSR would be seized by the NKVD and by its leader at the time Lavrenty Beria in particular. Beria was one of the masterminds behind the Stalin purge in the mid 1930’s when millions of people were either executed or sent to the gulags.

Nikita Khrushchev started to prepare for his fight for power before Stalin’s death. He did his best to put people he could trust into the top governmental positions. He especially counted on the help of Georgy Zhukov, one of the most prominent military commanders of World War II. Khrushchev, as it turned out, “backed the right horse”. In 1953 Zhukov helped Khrushchev to eliminate Beria who was then held the post of Vice Prime Minister – he was declared “an enemy of the people” and executed in Moscow. Then, in 1957 Zhukov and Leonid Brezhnev (who would become the leader of the USSR in 1964) helped Khrushchev to sideline some conservative figures in the government including Grigory Malenkov and Vyacheslav Molotov.

One of the first “liberal” measures of Khrushchev was the release of millions of political prisoners from labor camps set up by Stalin in Siberia and the Far East. In 1956 Khrushchev “dropped a bomb” on the 20th Communist Party congress. He publicly blamed Stalin for all his mistakes in the closed session speech called On the personality cult and its consequences. Khrushchev did the best he could to describe all the hardships the country suffered because of the personality cult imposed by Stalin. The wave of rehabilitations received new impetus. A significant sign of the changes was the fact that Stalin's body was removed from Lenin’s Mausoleum in 1961. These measures resulted in the significant relaxation of a society previously held captive by totalitarian fear. 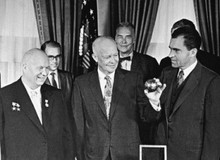 Nikita Khrushchev with President Dwight D. Eisenhower and Vice-President Richard M. Nixon at the Whitehouse on September 16, 1959. Khrushchev just presented the President with a copy of the pendant that was deposited on the moon by a Soviet space rocket (Luna 2)

The whole world could not believe this was happening. Khrushchev was also trying hard to make peace with those leaders who fell out with Stalin - for example, with the leader of Yugoslavia Josip Broz Tito who was heavily criticized by the Soviet authorities for his acceptance of the Marshal Plan – US aid for European countries. In 1959, he met with U.S. President Dwight Eisenhower – according to many analysts at the beginning of 1950’s, any summit between the leaders of the US and USSR would have been an unthinkable event.

It was during his visit to the U.S. that Khrushchev became very much fascinated with how Americans grew corn on a massive scale. Khrushchev got so enthusiastic about it that he ordered corn to be planted all over the USSR – the experiment later proved to be unsuccessful.

At the same time, there were some events that showed that it was hard for Communists to change right away. In the fall of 1956, Soviet troops stormed into Hungary to crush the government of Imre Nagy that did not share Communist values. Three years later, during his visit to the USA, Khrushchev surprised the world with his shoe-banging at the UN and the phrase which the West interpreted as “We will bury you”.  Another setback in the relations with the West began after May, 1, 1960, when the Soviet air defense forces downed a U2 spy plane piloted by American officer Gary Powers. A month later, at a summit in Paris, Eisenhower refused to apologize for the incident. Khrushchev took it as an insult. This led to the construction of the Berlin Wall in 1961. Another setback was the Cuban Missile Crisis in 1962 – nuclear war was only prevented thanks to the direct contact between Khrushchev and the then US president John Kennedy. But many historians believe that ottepel in international relations was over by then. 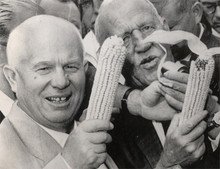 Another personal feature of Khrushchev was his critical attitude to arts – he was definitely no art connoisseur. He approved a campaign of defamation against Boris Pasternak’s Nobel Prize winning novel “Doctor Zhivago”. He also made numerous public insults of architects, sculptors, and composers. One of those heavily criticized by Khrushchev was the sculptor Ernst Neizvestny. By irony, it would be him to build a black-and-white monument on Khrushchev’s grave after his death. It symbolized bright and dark sides of the Soviet leader and the period of ottepel.

Ottepel and the lives of ordinary people

Most of the people in the country were pleased every time when Khrushchev introduced new measures in his endeavor to reform the country. The biggest problem in this process was the fact that very often the government in making its decisions ignored professional and scientific expertise.  One of such measures was the introduction of minimum wage in the country in 1956. The critics of the idea said the figure was so small and that amount of money would not save people from poverty. However, Khrushchev insisted on the implementation of this measure. As a result, this sum became a basic figure to calculate wages all over the country. Many people had to take another job to make their ends meet. 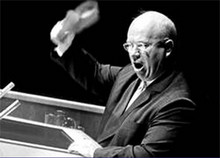 By the end of 1950’s the country was on the brink of the financial reform. Many economists tried to prove to the Soviet leadership that the time had come. However, Khrushchev did not have the courage to do it – his monetary reform turned out to be just a replacement of old banknotes with portraits of Stalin and redenomination of the ruble in the proportion of 10 to 1. This boosted inflation after the ottepel was over.

There definitely was a bright side of life, too. The ottepel definitely liberated millions of peasants – they were given identification papers and passports which allowed some of them to move to big cities. Another positive feature was the design of simple five-level apartment blocks which would be later named khrushchevka after the Soviet leader. Millions of such cheap and basic residential houses were built around the country from the 1950’s to 1970’s. This “construction know-how” helped to accommodate many people who wanted to live in the cities.

There was a “downside” of all these processes. Huge migration led to a decline in agricultural output, and the lives of those who stayed to farm the land became more difficult. The attempt to give more managerial powers to the local authorities did not help – too many controlling organizations hindered the process of agricultural development. The initiative to plough the virgin lands of the Volga River area and Kazakhstan (known as tselina) created lots of new collective farm and plough lands. But in the long run this campaign damaged the environment in those areas – long and cold snowless winters reduced the harvesting output by the end of the 1960’s. 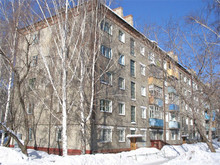 People did not know about these consequences at the time of ottepel. They were witnessing some cultural shifts they could not even think of under Stalin. In 1955, Moscow hosted a friendly soccer game between the teams of the USSR and West Germany – World Cup winners at the time – two nations who were involved in a deadly war just 10 years before. The Soviets won 3-2.

Two years later, in 1957, Moscow welcomed the 6th World Festival of Youth and Students. 36 thousand people from 131 countries came to the summer festivities which lasted two weeks. Some of the Soviet folks had the first chance to see young people from all over the world. For some of them these encounters changed their lives – they fell in love. The number of inter-ethnic births in Moscow and Leningrad sky-rocketed at the time.  Apart from that, the festival introduced lots of trendy clothing and fashion styles. Later on, it led to the formation of the youth informal movement called stilyagi (“the stylish guys”).  The main feature of the group was trendy jackets, trousers and dresses smuggled from the West. This fashion fell under heavy criticism from the Komsomol (Youth Communist League) leaders at various levels. Sometimes, the so-called “true Komsomol members” chased stilyagi around the cities and damaged their clothes. The desire to have nice clothes, the best watches and trendy rock’n’roll records which were extremely hard to get legally at stores led to the blossom of an underground trade in 1960’s and 70’s.

Reading of verses near the Mayakovsky monument. Shot from the Russo-French movie "Leon Garros looking for a friend"

The was also significant freedom attributed to the cultural sector. Never before seen in bookstores, one could find lots of uncensored books by Western authors like Herbert Wells, J.D.Salinger, and John Updike.  Lots of new theaters sprang up all over the country. In Moscow, the Soveremennik (“Contemporary”) theater was in the vanguard of the new cultural trends. For many critics this was a period of artistic rebirth and of relatively free expression after decades of Stalinist repression. Some of the poets who sprang up at that time – like Bulat Okudzhava, Evgeny Yevtushenko, Bella Akhmadullina led to the creation of the movement called shestidesyatniki (the 60’s generation, even though it had its beginnings in the 1950’s).

Ottepel gradually died down in the middle of 1960’s due to the huge resistance of the Communist Party authorities and various state institutions at all levels. However, lots of boys and girls that were born at that time kept hearing various stories about what it felt like in those times from their parents. And the idea of freedom was something they cherished in their hearts and minds – thanks to ottepel.