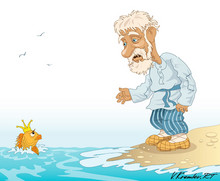 “At the end you’ll be left with nothing.”

If you say this phrase to Russians, most will instantly know what you’re talking about. This roughly equates to the well known English phrase, “back to square one,” or, “back where one started,” but say it to a Russian and they’ll start talking about a magic fish! So what’s going on?

Well, this phrase is just the moral at the end of a famous Russian allegory. It’s known by various names and its origin, as with many folk tales, is uncertain. The Tale of the Magic Goldfish or The Tale of the Fisherman and the Fish was made famous by the Russian author Alexandr Pushkin in 1833.

It starts with an old man living with his mean and greedy wife. Each day he goes down to the sea to fish. One day he casts his net twice, bringing up only seaweed, but on the third attempt he lands a large goldfish, struggling and gasping. It begs him to spare its life, and offers in return to grant any wishes he may have. The kindly old man wants nothing however, and frees the grateful fish anyway. However he then goes home and tells his wife, who furiously demands he return and order the fish to grant her a new washboard as hers is old and broken. The fish willingly does so, but this only fuels her greed. She next demands a new house, and the fish grants it. Now the wife, consumed with avarice wants a palace, then to become ruler of her province, then to become Tsarina, and finally to become ruler of the sea so she can even control the goldfish. Her greed is boundless. When her old husband goes to request this last wish, the sea, which was becoming more stormy and turbulent each time, is raging. The fish does not grant her last wish, but instead cures her greed by taking away all her gains and leaving her with her old, broken washboard.

The moral of the story is simple and has been replicated in many other tales. If you’re too greedy, you’ll lose everything. Also, if you happen to catch a goldfish, realize he might not be as powerless or stupid as he seems!