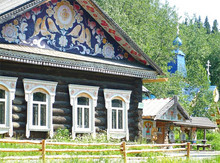 Upon leaving larger cities like Moscow and St. Petersburg, one is sure to see wooden huts or wooden cottages dotting the landscape of rural communities. These homes, known as dachas and formerly as izbushkas, have had a place in Russian life for centuries. Once, the wooden structures were used for storage or as homes for peasants.  Living quarters were small, with the majority of space taken up by a large Russian stove that served as an oven, a bed, a dryer, and a source of heat.  However, Russian cottages also represented a life of wealth and privilege for those living on estates during the Tsarist period.  Nowadays, Russians from different economic backgrounds have dachas as a getaway second home, away from busy and crowded cities. The wooden homes have had a number of uses and have been linked with both high and low socio-economic status throughout their history, becoming an integral part of modern-day culture.

Cottages became popular near St. Petersburg during the reign of Peter the Great. Initially, they were known as country estates that the Tsar presented to people who served their country admirably, to loyal vassals, and to those who were in his good favor. With the growth of a more intellectual and modern Russia, balls, social and cultural events flourished on dacha estates during the Age of Enlightenment.  Nobles invited artists, poets, and musicians to entertain guests and to share ideas. This fusion of bohemian life became injected into other parts of society as workers longed to acquire vacation homes of their own.

Soviet rule brought with it the dispossession of dachas. Exceptions included estates belonging to scientists, writers, miners, and some prominent figures in the Communist Party. Regular people became the beneficiaries of the confiscated lands after the plots were nationalized following the Bolshevik Revolution of 1917. Land for dachas was obtained and then distributed by trade unions.  The size, location, and overall quality of the cottages depended on whether one was a worker or a director. Sizes of most dachas were a highly regulated 30 square meters as they were meant to serve as a vacation home.  There were no bathrooms or showers.  Plots were small and were meant supplement the food shortage through collective farming or through what was known as gardening partnerships. Rules relaxed in the 1960s. Everyone who wanted to have a dacha could, with no limitations as to size, although land for most dachas could not exceed 600 square meters.

Cottages became more prolific during the 1980s as impoverishment spread throughout Russia.  The crops that the land provided not only gave dwellers more food, but also more variety of fruit and vegetables. 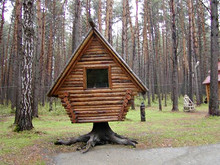 The influence of wooden homes is so strong in Russian culture that they are often depicted in Russian folklore. One of the most famous examples is a cabin in the fairytale Baba Yaga. Baba Yaga is a boney old witch who lives in a hut deep in the forest.  She will either help or hurt other characters in the story. Baba Yaga’s hut stands on giant chicken legs, has no doors or windows, and she travels in and out by flying through the chimney on a broom.

In Russia’s modern and real world, wood cabins are summer homes that can be large and complete with spas or small and modest. It is a common thing for people of different economic standing to own a second home, usually located one to two hours outside the city.

Written by Staci Bivens for RT