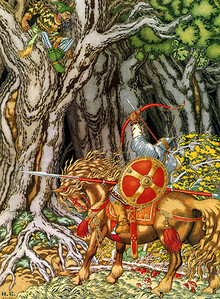 Ilya Muromets and Nightingale the Robber

Knights and dragons, giants, epic battles, underwater kingdoms and whistling brigands. The Russian bylinas are packed with them. Swashbuckling tales of do and dare, they’ve entertained and inspired Russians for centuries.

is first thought to have appeared around the 10th century as a form of epic tale told in an oral tradition. They are relatively short for stories so grand in nature, a few hundred lines long. They mostly took the form of poems and were sung, sometimes to the accompaniment of an early stringed instrument, gusli. It’s thought they were originally sung in princes’ courts by professional bards, and later moved out to the countryside to be sung or spoken by all manner of peasant storytellers.

The bylinas first began to be recorded by their performers in the 17th century, but in no systematic way. As the Russian state grew, so thebylina was pushed out to the fringes of the country. They survived on the margins of the Russian state, in the north, the Urals, parts of Siberia, and among Cossacks in the south. Then in the 19th century came a great popular revival of Slavic culture. The bylinas were rediscovered and written down for repetition and posterity. Today they form a rare collection of folk tales, where in many parts of the world such stories have been lost.

The root of the word Bylina is the Russian word "byl" meaning "that which was". It indicates that these were true stories rather than just fiction. Not a difficult leap of the imagination, presuming of course you believe in dragons.

Once collected, the bylinas were categorized by scholars. The early tales are more mythically linked and feature the old heroes of Russian culture. Of these, the best known is the story of Svyatogor the giant. As he dies, his death seemingly pre-ordained, he passes some of his strength to Ilya Muromets (http://russiapedia.rt.com/prominent-russians/history-and-mythology/ilya-muromets/), another knight, through his breath. 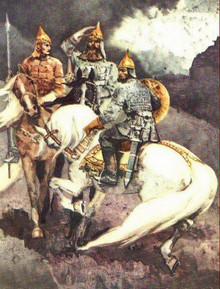 Next, we enter the most famous and rich vein of the bylinas , that of the Golden Age of Kiev and of Prince Vladimir I of Kiev. Kievan Rus was a historical state that existed from around 880AD to 1240, when the Mongols invaded. It was a forerunner to the Russian state. One of its most famous rulers was Vladimir I. Not only did he bring Christianity to his state, he was also something of a King Arthur of the East, with three special warrior heroes, or Bogatyrs whom he sent to enforce his rule and deal with various menaces around his lands. Although the time period was real and these three knights may have been based on real characters, their stories merge into myth and fantasy. Their legends are the most famous of all the bylinas. In 1898, they were depicted together on their horses by the famous Russian artist Viktor Vasnetsov. (http://russiapedia.rt.com/prominent-russians/art/viktor-vasnetsov/)

From left to right, the three heroes are Dobrynya Nikitich, Ilya Muromets and Alyosha Popovich.

Dobrynya Nikitich was known for his strength and bravery. He was best-known as a dragon slayer and for his three-day fight with the dragon Gorynich, which he eventually won.

Ilya Muromets is perhaps the most famous of all the three Bogatyrs, known for integrity and love of his homeland. He too fought at least one dragon, this one with three heads. But he is most famous for two other things. He seemed to do a lot of defending people against invading armies, often seeing off the attackers with suspiciously little help. He also managed to capture, then kill the infamous Nightingale the Robber. This was a half bird-half man, who would attack passers-by with his immensely powerful whistle. Ilya though it seems, had made sure he packed some very good cotton wool for his ears.

Alyosha Popovich was known for his wits. And he used them against, guess what, a dragon. Tugarin was a particularly rude and odious character, but when he soared into the sky on wings of paper to attack, Alyosha knew to pray for rain, which sent the dragon crashing to earth. He then did what any good dragon-slayer does, and chopped the beast into pieces.

The other great city of Kievan Rus was Novgorod in the north. This city was known as a great trading center, and produced its own unique bylina heroes as such. The most famous is Sadko the merchant. Playing his gusli instrument on the shores of the local lake, he is told by the Tsar of the Sea to make a bet with other local merchants about who can catch a certain fish. When he catches it, he wins the bet and becomes a rich sea trader. But wealth goes to his head and he doesn’t respect the Tsar of the Sea as he should. His ship is stopped at sea, and his crew decide the only way to get going again is to appease the Tsar of the Sea by throwing Sadko overboard. There in his underwater realm he warms the Tsar’s heart by playing his trusty gusli again, and the Tsar offers him a bride. He is told to choose the last in the line, and wakes up next to her on the shore.

There are also bylinas, which become more historically based, about various knights and heroes, who help defend Russian lands from the Mongols, or who help Alexander Nevsky fight off German or Swedish invaders. There is also a rich tradition of bylinas from the horse-mounted Cossacks  of Russia and Ukraine’s south, and some the last bylinas made were about Peter the Great .

From kings to knaves, dragons to damsels and forests to fortresses, the bylina has them all. With the modern re-telling of bylina stories in film and animation, each new generation of Russians is reminded that there’s no dragon or bandit out there that can’t be tackled with a bit of brain and brawn.