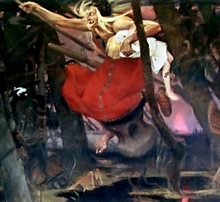 Baba Yaga is a famous witch of the East, well-known in Russia. She has spooked and scared little children across Eastern Europe for many centuries. The name of Baba Yaga is composed of two elements. Baba means "grandmother" or "old woman" in most Slavic languages.

There are two versions of the origin of this name. Yaga is probably a diminutive of the feminine name Jadwiga, in turn, is a Slavicized form of the Germanic Hedwig. Another version is saying the name of Baba Yaga comes from the old Russian verb yagat which means to abuse, to find fault. 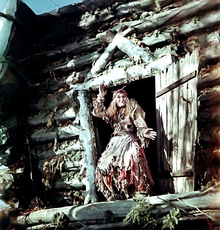 Baba Yaga  is single, presumably old spinster. However, some Russian peasants saw her living with a daughter Marinka (short from Marina). Some say Baba Yaga is the devil’s grandmother, which means she apparently had children.

She lives on the edge of the forest in a wooden hut, but it's like no other that you have ever seen, for it stands on a pair of giant chicken legs. It usually has no windows, sometimes not even a door. The house does not reveal the door until it is told a magical phrase: Turn your back to the forest, your front to me. The fence surrounding Baba Yaga's palisade is made of human bones with skulls on top, often with one pole lacking its skull, leaving space for another victim.

Baba Yaga is usually shown as an ugly old woman and quite unclean. Baba Yaga is often represented as little, ugly, with a huge and distorted nose and long teeth. This can be explained by the lady's place of residence. Far from the civilized world, her hut doesn't have any modern facilities like hot running water or shower. And she has been enduring these unbearable conditions for an untold number of years, as nobody else knows the age of this lady. 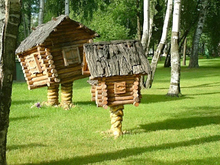 However, Baba Yaga knows something that women of all times and ages have been desperately trying to learn: the secret of turning from old into young in a blink of an eye. Baba Yaga knows a recipe of a special potion that helps her when needed to turn young. Unfortunately she has been known to use this her skill not to arrange her single private life, but to misguide and deceit strangers. She is also rumoured to have only one leg, which is sometimes explained by her relation to a snake.

In Russian tales, Baba Yaga is portrayed as a hag who flies through the air in a mortar, using the pestle as a rudder and sweeping away the tracks behind her with a broom made out of silver birch. Baba Yaga usually uses the chimney to fly in and out on her mortar. 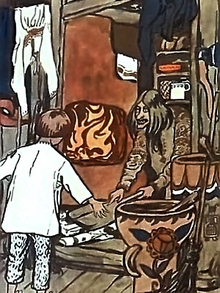 It has long been rumored that she likes to eat children, however she would not strain at a grown up stranger in her forest.

She is a very controversial character. Baba Yaga is not good, but is not entirely evil. She can't be portrayed as a good mixer or a very easy-going person. She needs a special approach. In most Slavic folk tales, she is portrayed as an antagonist. There are stories in which she kidnaps children and threatens to eat them.

There are also stories where she provides misleading information to strangers who were unlucky to lose their way in the deep forest she lives. However, some characters in other mythological folk stories have been known to seek her out for her wisdom, and she has been known on occasion to offer guidance to lost souls, help people with their quests, although this is seen as rare.

Seeking out her aid is usually portrayed as a dangerous act. An emphasis is placed on the need for proper preparation and purity of spirit, as well as basic politeness. It is said she ages one year every time she is asked a question, which probably explains her reluctance to help. This effect, however, can be reversed with a special blend of tea made with blue roses. 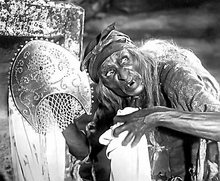 Baba Yaga is used by authors of modern Russian fairy tales, and from the 90-s of XX century - in "Russian fantasy". In particular, Baba Yaga appears in Andrey Belyanin's books in his Secret service of Tsar Pea, etc. The childhood and youth of Baba Yaga for the first time was described in Russian fantasy writer Andrey Aliverdiev's tale U Lukomoria. In some fairy tales, such as Finist Yasny Sokol (The Feather of Finist the Falcon), the hero meets not with one but three Baba Yagas. Such figures are usually benevolent, giving the hero advice or magical presents, or both.