The word khandra existed before Aleksandr Pushkin wrote Evgeny Onegin starting in 1823. However as with other Russian terms, it was Pushkin that lifted it from obscurity. Despite that, it still proves difficult to translate today. Here is a passage from Evgeny Onegin and its translation, though the translator couldn’t quite find a word to replace it with.

The illness with which he'd been smitten

should have been analysed when caught,

or Russia's chondria, for short;

it mastered him in slow gradation;

thank God, he had no inclination

to blow his brains out, but in stead

to life grew colder than the dead.

he stalked the drawing-rooms, remote

from Boston's cloth or gossip's quote;

no glance so sweet, no sigh so teasing,

no, nothing caused his heart to stir,

and nothing pierced his senses' blur.

So as we can see, this is one of those difficult-to-pin-down words that tries to express something in the human soul that we know is there, but can’t easily put into words. The comparison that both Pushkin in his Russian and Johnston in his English makes is, with the English word “spleen”. This was used by authors in the romantic period to describe melancholy, a feeling of despondency short of suicidal depression but still debilitating. 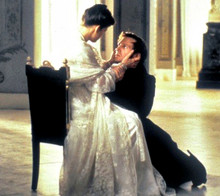 In Pushkin’s novel in verse Evgeny Onegin, the above passage refers to the central character of that name. The condition of detached melancholy plays a central role in the story and in the psychological themes Pushkin seeks to explore. Onegin becomes the object of desire for Tatiana, who declares her love for him. When they meet, he spurns her in what has become known as his “sermon”. Critics have described this speech as diplomatic and well-phrased by Onegin, but nevertheless cold and condescending. It is his khandra that has made Onegin cold and aloof to Tatiana’s genuine warmth. Later in the story Tatiana, having left and been exposed to Moscow society, has become well-educated. Now that Onegin realises her refinement, he becomes the smitten one, but has his own declaration of heartfelt love for the now married Tatiana also spurned in her own “sermon”.

Pushkin uses these sermons to demonstrate the object of his attack in this work. He is criticizing what he sees as the straight-jacketing, scornful and cold effects of social convention in this world, also the world of Pushkin’s real life. It was the deadly inhumanity of social convention that stifled the life and empathy out of good people, leaving only false kindness, vanity, selfishness and indifference. Leaving empty souls afflicted with khandra.

He also calls it the scourge of England or Britain, referring to the very strict and stifling myriad of social conventions burdening society there at the time, conventions that had by the 1820s been swept away in much of post-Napoleonic Europe. Russia shared with Britain the survival of its elite, and the overbearing customs that came with them.

For Onegin and Tatiana, these social conventions, and the khandra they created denied the two of them the chance to be together. For Pushkin, who blamed society’s cruelty for so much wrongdoing, and who died in a duel in 1837 (there is a needless duel in Evgeny Onegin too), it was to cost him his life.