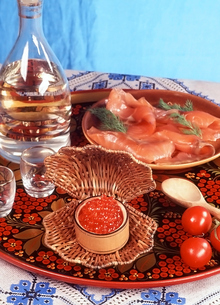 Zakuska is a a general  word for appetizers, starters, entrees, hors d'oeuvres, however in most cases it is the food, which accompanies vodka and other strong drinks like whisky, cognac or brandy.

The word zakuska became popular in Russia in the 18th century. At first it was a synonym for breakfast. According to tradition, it consisted of cold dishes only. Leftovers from the previous night’s dinner were also welcome. Later on the word zakuska was applied to all cold dishes of Russian cuisine.

In the 19th century the list grew longer thanks to kholodets . Some European entrees also became zakuska, like French pate and marinated vegetables and German "bread and butter." The 20th century brought more pickled fare, along wit canned fish, olives and pickled salads. Russians still do their own pickling at home and at their dachas (summerhouses). 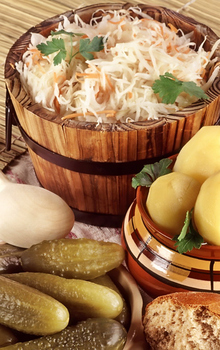 The way zakuska are served has evolved over the years. At first zakuska were served long before lunch or dinner and consisted of two or three dishes and vodka. Over the years they were consumed in increasingly closer proximity to dinner and by the late 19th century became an inseparable part of the dinner itself. The three basic ingredients remained unchanged - fish, meat and vegetables.

Perhaps the main vehicle keeping zakuska popular is strong drink, which requires some light food as a chaser to avoid getting drunk. Few Russians sip on drinks - they simply don't know how. They drink vodka and other drinks by shots. And zakuska is the prime assistant in this business.

There is a Russian saying that says "kogda p'esh, zakusyvat'nado" (when you drink, you should have some zakuska). Keeping in line with it the Russian drinking culture has produced some drinking and eating combinations the world has never known before. Some examples are cognac with herring or kholodets, port wine with sprats and whisky with pickled cucumbers.

Today notions of strong drink and zakuska are inseparable - during Russian parties people usually sit at the table and have vodka and zakuska for an hour or two - sometimes longer. And only then are they ready for the main course.

Listed below are some of the most popular Russian zakuska to accompany vodka: