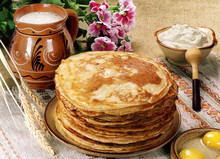 The history of blini

Blini, or pancakes, are thin, flat cakes prepared from batter and cooked on a hot frying pan - first on one side and then flipped to cook on the other side.

The origins of this traditional Russian dish, which recently celebrated its thousandth birthday, can be traced back to ancient times. Its ancestor was made from oat jelly; a hungry traveler wishing to warm the composition up on the fire probably got distracted by something very amusing, leaving the jelly to fry and thus creating the first blin.

Since then blini have changed, but not dramatically – they are now made not only from oats but also wheat, rye, buckwheat and barley.

The sun on your plate 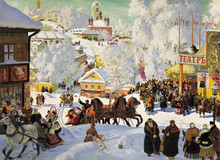 In pagan times blini were made for Maslenitsa, also known as “Butter Week,” “Pancake Week” or “Cheese Fare Week.” It was – and still is - celebrated during the last week before the Great Lent. Maslenitsa was a sun festival, celebrating the imminent end of winter and the coming of spring. It lasted for a week, during which time people tended to eat nothing but pancakes. The blin itself, round and golden, symbolized the sun.Tradition has it that if a woman prepares many tasty pancakes spring and summer would bring a rich harvest, health and success.

Blini traditionally accompanied a person from birth to his very last day – a woman who had just delivered a child was given a pancake that was supposed to bring luck to the newborn and when a person died blini were an absolute must at the funeral feast.

Blini are eaten with as many fillings and as one can possibly imagine – mushrooms, meat, wild berries, sour cream, onions and potatoes, fish, honey, condensed milk, jam, caviar, cheese and what not. 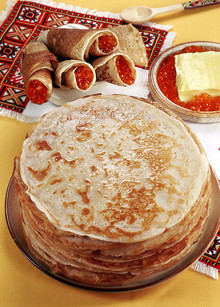 The process of preparing pancakes used to be long and mysterious. First, a good housewife made sponge dough from warm water, yeast and some flour. The mere place where the sponge dough was prepared was of great significance – women set off to lakeshores or the forest’s edge. The first pancakes were put on windowsills for the poor.

Griddles on which bliny were made were cast-iron and without a handle. Such griddles were to be used for preparing blini only; no other dish could be cooked on it. Blini didn’t burn on such frying pans, and it was possible to jolt them high into the air while flipping them to the other side. In ancient Russia special races were held, where people had to run while jolting blini.


Nowadays blini remain not only one of the quickest, tastiest and diverse dishes (due to the large variety of fillings), but they are also much written about - and not just in cookery books. Many Russian writers including Chekhov , Pushkin and Gogol have dedicated pages and even stories to blini. They also appear in many poems, songs and proverbs.

Over the last thousand years much has changed in the process of cooking blini and many traditions have been linked to Russian pancakes. But one thing remains unaltered – these small, tasty symbols of the sun are still loved and eaten everywhere.