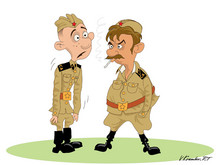 Granddads in the army

Dedovshchina, or hazing, is rooted in the Russian word ded, or grandfather, and stands for the major form of internal violence in the Russian army. It is exercised by soldiers serving their last year of compulsory military service against new conscripts. Dedovshchina is a set of painful, humiliating rituals, exploitation, torture, bullying and beatings for insubordination.

Humbling activities are used by senior conscripts as an authority-maintaining tool. Physical or psychological abuse is applied to make new conscripts do certain fatigue duties. There have been cases in Russia where soldiers have been seriously injured or even died as a result of this kind of bullying. Dedovshchina exists in almost all military units, which explains the large number of victims. Nowadays about 30% of all Russian men pass through the army and high-ranking military ministries plan to increase this number.

Investigating the roots of dedovshchina

Russia first heard about dedovshchina in the 1970s. According to WWII survivors, they never encountered bullying in the Soviet Army, and it’s still difficult for these war veterans to believe such a problem exists today. However dedovshchina as an informal system of subjection is common practice not only in Russia, but globally.

In the Soviet/Russian armed forces the practice became known as dedovshchina, or “rule of the granddads.” It may have begun during World War II when the Red Army started putting prisoners in uniform, calling them “penal battalions” and having them clear minefields by walking over them, among other things. Or some say it started in 1967 when a new law in the Soviet Army meant some conscripts were serving two years at the same time as others were serving three.

The “granddads” were the conscripts in their final year and it came to operate like systems of bullying everywhere. The older conscripts viewed vicious punishment of newcomers as “revenge” for what they had suffered. Whereas there had most likely been oppression in the past in the Russian armed forces, this pushed it into bullying and even outright torture.

Whatever the origin, it seems impossible to eradicate, despite the horror stories of soldiers who were beaten to death or had grave injuries inflicted on them, or stories of those who committed suicide unable to stand the hazing. Among other measures taken by the government in an attempt to eradicate dedovshchina, besides cutting the term of service, is the proposed implementation of a system of supervisors, who are expected to establish personal contact with each soldier, address his needs and, if necessary, solve conflicts and problems.

The hierarchy of the fittest

All soldiers are divided into groups according to their time of service. Each conscript moves from the lowest status to the highest status during his service period and has the same right to beat and abuse young soldiers at the end of his term. Senior soldiers have special traits that distinguish them from regular conscripts: for instance, they are allowed to leave the top button of their uniform undone, or have their uniform adjusted to their figure; they can also buy belts made of genuine leather, while junior soldiers wear loose-bodied and rough army outfits.

Hazing in the Army is die-hard not only because the army authorities are not doing enough to eliminate the problem, but also because of the phenomenon’s strong theoretical underpinning.

Those who are humiliated at the beginning of their term of service prefer to endure all the difficulties to later enjoy the privileged position of a ded. However, only some soldiers are initially willing to participate in dedovshchina, others are converted step by step and still others can’t adapt and run away, are killed or commit suicide.

The case of Andrey Sychyov

One case, which shocked the world as to how far standards had fallen, was that of Andrey Sychyov. In December 2005 Sychyov and seven other soldiers were beaten for three hours by their seniors. Sychyov was then forced to squat for four hours with his hands tied behind his back while a sergeant continued to beat him. Only a few days later was Andrey transferred to a local hospital where doctors found he had numerous broken bones, trauma to his genitals and gangrene in his legs. As a result of his injuries, doctors had to amputate his legs, genitalia and a finger.

There were allegations the army tried to cover up the story and keep the doctors silent. However one physician told the Committee of Soldier’s Mothers, a charity campaigning for soldiers’ rights, which in turn informed Andrey’s mother about the incident. She was told she couldn’t see Andrey until 10 January but on 7 January another doctor told her to come quickly as Andrey might not last the night. As it was he survived, but was crippled by the brutality of his fellow soldiers. In response to the case, one conscript was given a mere four years in prison. Andrey was nineteen years old.

In 2006, the New York Times reported that at least 292 Russian soldiers were murdered whilst undergoing dedovshchina (officially the figure is 16, still a national outrage in most countries) and that there had been 3500 reports of abuse up until August that year. The brutality also has huge consequential effects. Hundreds of soldiers, terrified of when their next - and possibly last -beating will come, commit suicide.

Hundreds more attempt suicide, contemplate it or are reduced to nervous wrecks by the experience. Thousands desert. Some are armed and have shot other soldiers in revenge or shoot the ones sent to bring them back. Some trek months across Russia to try and get back to their families or to charities.

Dealing with the problem

By 2007 the problem had become so horrific and ruinous to morale, the Russian government lowered the term of service from two years to 18 months, further reducing it to one year in 2008. It’s hoped that although more conscripts may have to be rounded up as a result, the problem of systematic bullying may finally be dealt with. Partly for this reason, many Russians are flatly opposed to conscription and want to see it abolished.

Military organizations all over the world have experienced internal violence ever since war has existed. But with the creation of truly industrial-age, mass armies in the 20th century, the nature of such violence has changed. In other armies oppression by seniors against juniors is commonplace, but specifics of time and place seem to give rise to particularly brutal manifestations of it.

It’s hoped the reduction in terms of service will help reduce the problem as well. But many agree that only major reforms, namely the creation of professional, experienced sergeants (they are currently chosen from among the regular conscripts and serve no longer than them) and ultimately a professional army will put an end to a situation in which the average soldier is more at risk from his comrades than the supposed enemy.