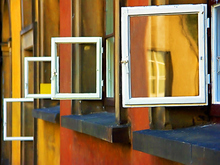 More than a window

It’s called a Russian window, or fortochka. It has no equivalent in any other language. It is scarcely more than 35 x 45 centimeters and is definitely unique. It has loads of functions. For a long time it was considered archaic, but nowadays all modern glass-works want a licence to produce it.

Its appearance in Russia, and therefore in the Russian language, was arduous and prickly. Its next of kin is the Polish fortka meaning a small door, which in its turn originated from the German die Pforte or gate. Its origins are deeply buried, together with the Roman Empire, in the annals of history. Currently, no other language has the exact translation of the word fortochka.

The very concept of fortochka is peculiar, for various reasons. It is the only notion, and word, which has lost its original meaning and form in the language from which it was derived, but remains cherished in Russia so strongly that it seems the fortochka was born here. Its modern Russian shape was designed by Rastrelli specifically for the Winter Palace.

It appeared at the top of a regular window and could open independently of the other panes of glass. The window was constructed in accordance with the principle of separating two windows so that there is a space between two layers of glass.

The placing of an opening at the bottom of the outermost window and at the top of the innermost window meant that the window could be opened for ventilation without the loss of heat and without noise and pollution entering from outside. If a blind was installed in the gap then the fortochka window could supply maximum solar heat in the cold seasons and screen off dazzling sunlight and excess heat in summer. 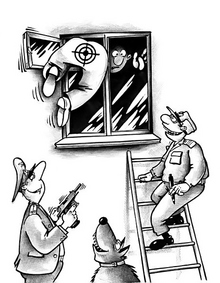 The modern version of fortochka is widespread in Russia. It has more functions than standard windows and many advantages: cleaner buildings, insulation against noise and a reduction in heating and ventilation costs. Perhaps the most important advantage is that the multi-functional window is helping to render the installation of air-conditioning superfluous as

Russia has always welcomed innovations that help to save money, time, and effort. Fortochka can be used year-round. It is extremely practical in the Russian winter. When forced-air from city-wide heating makes apartments too stuffy, the fortochka is opened. On summer nights, when ventilation is needed, it appears to be absolutely essential.

The window of opportunity

In Russia there exists a special profession – a fortochnik. That is not on any account a person who repairs or actually makes fortochkas. He (or she!) is a slightly different type of pro - a thief, the one who robs flats. The job is not easy – because of the tiny size of fortochkas only the skinniest and shortest can make their way into the narrow professional circle.

Fortochka can be found in all Russian books of dream interpretations - no exceptions - where it appears to be highly significant.