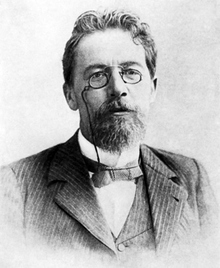 The most insightful and époque-making dramatist Russia has produced, Anton Chekhov left, aside from many notable short stories, a few dramas that strike with their originality and subtlety. Chekhov combined realistic approach with philosophic observation and a strong sense of humanity. At least four of his plays, “The Sea Gull,” “The Cherry Orchard,” “Uncle Vanya” and “Three Sisters” have become famous worldwide, mostly through their interpretation by the Moscow Art Theater.

Anton Chekhov was born in Taganrog, a diversely populated city in southern Russia on the Azov Sea on 17 January 1860. He was the third of six children. His father, Pavel Chekhov, was a grocery store owner. Pavel Chekhov wasn’t passionate about his trade and preferred to spend most of his time at church, singing in the choir and engaging in social activities. Chekhov's grandfather was a serf who worked hard to buy himself out in 1841, two decades prior to the emancipation of the serfs in 1861.

In Melikhovo he resumed his medical activity, but never charged for his services. He volunteered as a district field doctor during a cholera out-break, providing medical care for 25 neighboring villages; he sponsored the opening of a medical station in Melikhovo 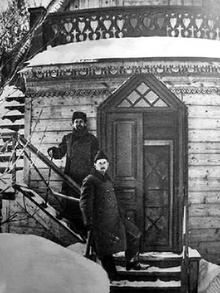 and supplied it with medications. Chekhov built three schools for local children, a bell tower and a fire department for village dwellers; he also negotiated the village road construction. At his request, a post station and a telegraph were opened in the area; he also engaged in massive forest plantation. In his hometown of Taganrog, Chekhov opened a library and donated over 200 volumes from his private collection, among them very rare exemplars. He also remembered to regularly replenish the library with new publications.

Despite the long and laborious way to the estate, guests simply streamed to visit the Chekhovs. Chekhov was never a homebody himself. He frequented Moscow and St. Petersburg, attending editorial offices and participating in the literary circles. But amid his pro-active lifestyle, Chekhov never stopped working.

In drama, Chekhov emerged as an innovator with the first of his four major

plays, “The Seagull” (1895). Although the first production in St. Petersburg in 1896 was an utter failure, a new one by the Moscow Art Theater – recently formed and propagating new principles of directing and acting – won desired recognition and became a new 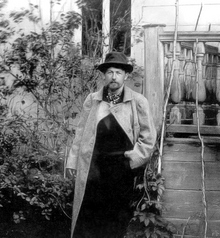 start for the dramatic art as such. The play was such a spectacular success that the seagull later became, and remains, the theater's official emblem. Subsequent Moscow Art Theater productions of “Uncle Vanya” (staged 1899), “Three Sisters” (1901), and “The Cherry Orchard” (1904) solidified Chekhov's reputation as a master of new drama and imposed the worldwide influence of his plays and methods on world drama art.

In 1897 Chekhov’s tuberculosis worsened. His health, already unstable, was significantly undermined by the Sakhalin expedition, and doctors insisted on his relocating to a warmer climate. So, he spent the winter of 1897-1898 in Nice and Paris. In May 1898 Chekhov returned to Russia and immediately left for Yalta, Crimea, where he bought a piece of land. In October of 1898 his father died, and Chekhov sold Melikhovo to move to Yalta permanently with his mother and sister. In Yalta he again performed intensive social work: he was elected member of the board of trustees of the women’s gymnasium, he donated money for construction of the local school and supervised the opening of the first local biological research station. A tuberculosis victim himself, he never stopped providing medical supervision for anyone seeking his help. Not only did Chekhov solve people’s health issues, but also assisted in straightening out naturalization papers for Jewish settlers. 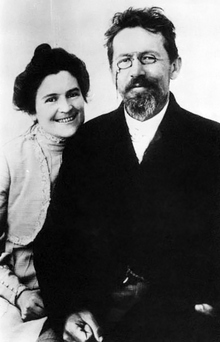 At the turn of the 20th century Chekhov was already recognized nationwide and his many pieces were the subject of fierce discussion; in 1900 Chekhov was elected an honored member of the St. Petersburg Academy of Science, but he voluntarily resigned to support another writer and friend, Maxim Gorky, after the latter was expelled from the Academy for his “political instability.”

In the spring of 1900, the Moscow Art Theater came with a tour to Crimea. The entire company spent days at Chekhov’s estate. But already in July of that same year, Olga Knipper, the theater’s leading actress in all of Chekhov’s plays, had come to visit him. Chekhov met Knipper in 1898 when the rehearsals at the theater were only just starting, and had began a correspondence with her. This July spent together sealed their fate as a future couple.

In the winter of 1900-1901 Chekhov undertook a health-improving trip to France and Italy. When he came back in May, he and Olga Knipper were married. Almost immediately after the wedding Olga took him to the city of Ufa to receive koumiss treatments, said to be a very effective anti-tuberculosis remedy. Very weak and unwell, Chekhov kept on working and helping everyone out, as, in his own words, he “despised idleness, weakness, and listlessness of the soul.”

Knipper acted in Moscow and had a very packed schedule, while Chekhov stayed in Yalta, the only place his sickness did not worsen. They both suffered their parting and their correspondence, touching and romantic, indicated their deep mutual affection. In one of the letters Chekhov wrote, “If we are not together now, this is neither your, nor my fault – this is the devil who had inflicted this disease on me and this love of art on you.”

In June 1904, “The Cherry Orchard” was staged, the last of Chekhov’s creations. Chekhov’s health declined and he set off for Badenweiler, Germany with his wife, not in hope of recovery, but just in an attempt to mitigate his suffering. On 2 July 1904, he died in a hotel at Badenweiler. His body was returned to Moscow for burial.

Over the years, none of Chekhov’s plays have lost their acuteness. Works of art of many layers, they present every director with a chance to see something new and appealing; this is the reason why the plays are still incredibly popular with theaters worldwide. Chekhov’s short stories are reprinted in several editions and are part of the Russian school curriculum.