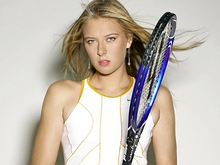 Sharapova was born on April 19, 1987 in the small town of Nyagan in western Siberia. She developed an early love for tennis and began playing at the age of four. After moving with her parents, Yury and Yelena, to the Black Sea town of Sochi, it was her father who quickly recognised Maria’s talent and encouraged his daughter.

Her first trainer was Yury Yudkin.

“What amazed me straight away was that at 4-and-a-half years of age she was extremely intelligent,” Yudkin remembers.

“Maria absorbed everything I explained and showed to her. She grasped everything in a single flash. She mastered hits, which are still not clear to everyone. At 7 she learned the twisted serve and was a little master.

You cannot imagine that in life she is a kind, soft, smiling girl, because as soon as she takes the racket in her hands, she is a beast! Goal oriented, not scared of anyone, she will do what it takes to win! In the three years of working together not once did she say ‘I am tired’.”

Moving to the U.S.

When she was six Maria got a chance to have a lesson with the world famous Martina Navratilova during the Kremlin Cup in Moscow. Navratilova saw talent in the very young tennis player and strongly suggested to Yury that he take her to the Nick Bollettieri Tennis Academy in the United States. Maria’s wise farther, who was determined to develop his daughter’s talent in every way, decided to risk it. With $700 in his pocket and no knowledge of English, he moved with his daughter to Florida. Maria’s mother stayed behind to finish college and wait for her visa. Maria would not see her mother for two years.

It seemed the odds were against them at first. Maria was too young to be accepted at the Tennis Academy as a full-time student and thus for two years Yury coached her on public and private tennis courts. Their perseverance paid off and Maria received a scholarship to the Academy in 1995. Yury worked two jobs in order to support their living while Maria, now nine years old, lived on campus with girls twice her age who constantly teased her. But Maria’s desire to succeed only intensified and in 2000 she achieved her first success, winning the prestigious Eddie Herr Championship for girls under 16. 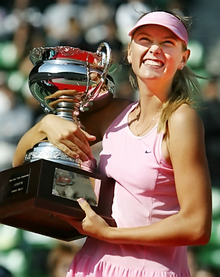 In 2001 Maria made her first professional tournament debut and in 2002 she started accumulating victories in various ITF tournaments. In the following year she won her first WTA tournament in Japan and got through the fourth round at Wimbledon. By this time her popularity had started to grow and endorsement deals soon followed.

Although at first her popularity among the public was not as much for her sportsmanship, as for her model looks and loaded grunts on court. Other players and even supervisors complained about the decibel level (measured at 101 DB) of her scream. But to most tennis fans her shouting was not such a big deal, and even gave the young beautiful player character and charm. She was nicknamed ‘Screaming Cinderella’ and ‘The Siberian Siren’ by the press. Maria herself says that the scream helps her concentrate.

Her real breakthrough came in 2004. At the age of 17 Maria made it through the finals at Wimbledon. She was up against the defending champion Serena Williams. Sharapova was said to be biting her nails behind the stage but showed no sign of nerves when she walked onto the court to face the six-time Grand Slam winner. Indeed it was Williams who struggled and was overpowered (6-1, 6-4) by the 17 year-old beauty who dropped to her knees and buried her head in her hands after her storming victory.

She became the third youngest female to claim the title in the tournament’s history. It was truly a fairytale triumph, not only for Maria personally but for the whole of women’s tennis in Russia. After the match Maria made a dash to embrace her dad, she was giggly and fumbling with a cell phone while trying to call her Mom, just like any average teenager.

Maria picked up around $US 1 million in prize money for beating Williams. When asked what she would spend it on the champion said: “I’m a gift person. I like to buy gifts and I will buy something for my parents and something for myself.” Her family has always been her priority “It’s been a lot of hard work and I will always be so grateful to my mom and dad for everything.” 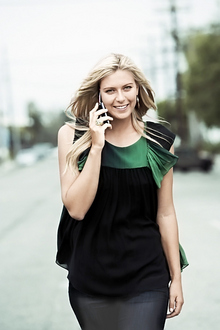 After loosing in the third round at the US Open, she played a couple of lower tier tournaments in Tokyo and Seoul (which she won) to regain her confidence. She finished the season brilliantly at the WTA Year-End Championships beating Serena Williams again.

Father on the court

Maria’s tennis career was on the rise. She accumulated a total of 19 WTA Tour titles and three Grand Slam titles including Wimbledon in 2004, the US Open in 2006 and the Australian Open in 2008. During 2005 she was ranked World No. 1 and in 2008 she finally made her Russian Federation Cup debut after much controversy arising from the scandalous behaviour of her father Yury, who constantly screamed out to Maria during matches and made rude remarks towards Maria’s opponents.

Fellow tennis champion Anastasia Myskina even vowed to stand down from the Russia Fed Cup squad in 2004 if Sharapova was selected to play. “I feel his behaviour is totally incorrect, simply rude. I don't want to be around people like him. He was just yelling and screaming instructions to her,” Myskina said. Sharapova represented Russia in 2008 during the Fed Cup and won both her matches.

Maria is now a true superstar making millions of dollars in endorsements with countless commercials and magazine covers including Vogue and Sports Illustrated. She was number 3 on Forbes magazine’s list of ‘Richest Athletes’ and is ‘the face’ of many brands, including Prince, Sony Ericsson, and Land Rover.

Maria sees herself differently in real life: “The person that my friends know is much more low key than the person that everyone else sees. I'm a very low-key person. I don't need many things. I don't need glamour and attention to be happy. I'm very happy being settled and working my butt off and trying to win grand slams. I want my tennis to speak for everything.” Compared to her fellow Russian blond bombshell Anna Kournikova, Maria does keep a quieter profile among the ‘A list’ celebrities and is more popular for her tennis skills then her love affairs.

Off court, Maria’s interests include music, reading and fashion. She has also confessed to collecting stamps which, she says, her friends think is pretty nerdy: “My friends sometimes think I'm a bit dorky. If I drop something it's like, 'Yup, very typical of me'. At times, I'm clumsy.” Maria is a Goodwill Ambassador for the United Nations Development Program (UNDP) and donates thousands of dollars to charity each year. She plans to study fashion in London at the end of her sports career.