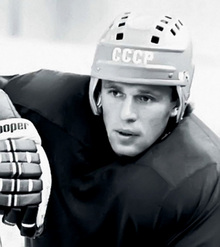 Viacheslav Fetisov is one of the most decorated players in the history of hockey. His name is a synonym to the game. He is a two-time Olympic champion, seven-time World champion and holder of two Stanley Cup rings. He was one of the best defensive players in hockey when he was teamed with Alexei Kasatonov on the Soviet national team in the 1980s. Fetisov was well respected by his teammates for his strength of character both as a player and in private life. Fetisov served as captain of both the national team and of the Central Army squad.

Viacheslav Fetisov was born on 20 April 1958 in Moscow. The future USSR hockey team captain took his first steps on the way to fame on a backyard hockey arena under his father’s strict supervision. Later Fetisov liked to say that he owed his sporting career to his father who worked on his son’s ice-skating since the age of four. This small backyard arena was situated on Korovinskoe Avenue (a high way). Young Slava was a very talented and hot-tempered student. He was the first to arrive at the arena in the morning and the last to leave, often practicing alone or in his dad’s company.

Among the players at the arena there were older boys - lucky members of the Dynamo (the oldest sports and physical training society of the Soviet Union) youth hockey team. They invited young Slava to join them. Slava mustered all his courage and went to the Dynamo headquarters. But he was not admitted due to his young age. He was eleven at the time. He tried to do the same with CSKA (a major Russian sports society referred to as the Red Army), lying about his age. The reaction was the same. But young Slava didn’t give up. Though he was not admitted to the hockey youth school he continued training hard and believed that the world of professional hockey would accept him one day.

Young Slava got his chance when the small local team he was playing for made it to the final of “the golden puck” youth tournament that was held by CSKA. The young defensive player was noticed and accepted to the CSKA hockey school in 1970 at the age of 12. 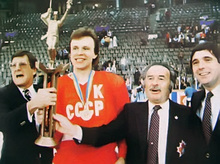 Viacheslav Fetisov made his debut on the CSKA hockey team in spring 1975. And in 1977 he won his first title – champion of the USSR.

In 1978, in the final championship game, the Soviet youth national team faced the team host of the championship - Canada. Fetisov was face-to-face with Wayne Gretzky. Despite the game being held in Canada and young Gretzky’s already shining star, Fetisov and the Soviet squad were victorious in that battle. Later Wayne Gretzky said: “During my life I have never seen a more tenacious and active, smarter and more threatening defenseman than Fetisov.”

That same year Fetisov was invited to join the national team. 1978 made him a world champion and brought him a best defenseman of the tournament title. In 1980 he made his Olympic debut. 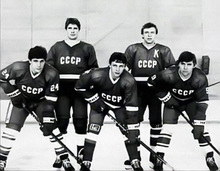 In 1982 Fetisov was named hockey player of the year in the USSR. In 1984 he was chosen as captain of the USSR national hockey team. That same year brought him his first Olympic gold medal and he was named the best hockey player in Europe. During this time he also played for CSKA forming a defensive line together with Alexey Kasatonov known as the world famous “KLM line” (Krutov, Larionov, Makarov). During the 80s these five players were the basement for the Soviet national hockey team, winning almost every game they played. The team was dubbed the “Red Machine.”

In 1988 Fetisov wanted to move to the NHL. But serving in the army (CSKA was an army division), his chances were next to nil. There were no precedents of Soviet players moving to the NHL.

The political climate was changing in the USSR and Fetisov applied for his release from the army after the conclusion of the 1988 Soviet hockey season, but his release was rejected by the authorities. It was announced that he would not be allowed to play with the national team during the upcoming World Championships, his teammates rose in solidarity to have him reinstated, stating that if Fetisov was not allowed to play then they would not play either. He was soon reinstated and the players wasted no time in electing him as their captain.

Fetisov describes this time as one of the hardest in his life: “The Soviet Minister of Defense tried to scare me, demanding that I apologize for asking to leave. He gave me an ultimatum: apologize or be sent to Siberia, where we will make life very difficult for you. I knew that if I took even a small step back, I would be in deep trouble. I faced a lot of intimidation; most of my friends were afraid to talk to me. It was the toughest time of my life, but I finally won the war. I was the first Soviet to sign a direct contract with the NHL, and I’m proud to say that not only hockey players followed me. The door opened for people in every profession.”

Fetisov won many medals and awards in his life, but this was his biggest victory. It was a victory against a whole system. But he was not alone. Fetisov together with Igor Larionov (center of the KLM line) forced the rebellion against the Soviet system.

As Larionov later said about Fetisov: “I have always considered Slava (Fetisov) to be the leader. He is the cement of our line, of our team.”

In 1989 Fetisov was given the green light to join the NHL New Jersey Devils club. At the age of 31 he began his career almost all over again. 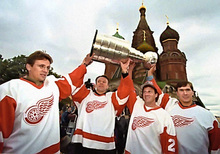 He would go on to play for nine seasons in the NHL, including his final three in Detroit.

While playing with the Red Wings, Fetisov participated in the 1997 and 1998 All-Star games and earned two Stanley Cup rings in 1997 and 1998. After his first title, he organized the Cup's first visit to Russia. He retired as a player in 1998.

Dave Lewis, assistant coach of the Detroit Red Wings once said about Fetisov: “He is the kind of guy you’d like to take the formula, put it in a bottle and let all the younger players drink that formula, because there is no one like him.”

After Detroit, Viacheslav Fetisov moved back to the New Jersey Devils as assistant coach. He earned his third Cup ring with the Devils in 2000. In 2001 he was appointed head coach of the Russian Olympic team. At the Salt Lake City Olympic Games the Russian hockey team took third place.

In 2002 Viacheslav Fetisov was appointed as head of the Federal Agency for Sport and Physical Education and served until 2008. He is a current member of the Federal Assembly of the Russian Federation.

On 29 March 2005 Fetisov joined the WADA (World Anti-Doping Agency) Athlete’s Committee as its inaugural chairman. Nowadays he is also chairman of the board of Directors of the KHL (Kontinental Hockey League).

Viacheslav Fetisov was elected to the Hockey Hall of Fame in 2001.

Fetisov is fond of sport and traveling. He spends most of his vacations in the mountains. This habit comes from Soviet times and he is a frequent guest in the Caucasus. He considers mountains to be the best place for relaxation. 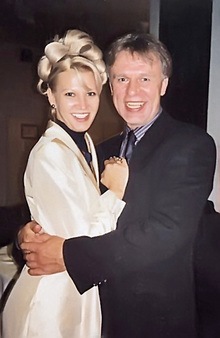 Viacheslav Fetisov is considered one of the most decorated players in world hockey history.

In 1982 Viacheslav Fetisov met with his future wife Lada. Though she was married at that time he fell deeply in love with her. He was very persistent and finally Lada gave in and divorced her husband. They could not be married immediately but were able to do so later. In 1990 little Nastya was born. Viacheslav Fetisov was a loving father to his daughter treating her as a princess. As a matter a fact she was crowned in 1997 with the title of Miss American Princess.