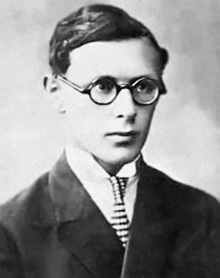 Mikhail Moiseevich Botvinnik was a Soviet chess player, the sixth chess World Champion, a six-time champion of the USSR, a USSR and international grandmaster and an honored worker of science and technology of Russia.

He was born in Kuokkala (now Repino) near St. Petersburg into the family of a dental technician, who soon left his wife and two sons. At 12, Botvinnik started playing chess, self-perfecting his technique, and at 14, he achieved the first sports category. He gained the title of master at 16, after taking fifth place in the USSR Championship. He progressed quickly and at the beginning of the 1930s became one of the country’s best masters, confirming himself at the seventh and eighth USSR Championships. In 1933 he drew a match with the young Czech grandmaster Salomon Flohr. The USSR chess officials picked Botvinnik as a man capable of winning the world championship. He proved he was, with his success at international competitions, winning the Leningrad Tournament and sharing the first and the second places at the Second Moscow International Tournament. The latter success earned him the title of grandmaster.

Then he took second place at the Third Moscow International Tournament, losing only to José Raél Capablanca, but besting Salomon Flohr and Emanuel Lasker, and shared the first and second places with Capablanca at a grand international tournament in Nottingham, winning over Aleksandr Alekhin, Max Euwe and Emanuel Lasker. In the tournament of the world’s eight best chess players, Botvinnik was third, besting Alekhin and Capablanca, but losing to Paul 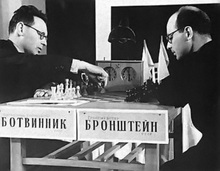 Keres and Reuben Fine, who shared the first two places. With the accord of the country’s leaders, Botvinnik challenged the then world champion Alekhin to a world supremacy match, but the beginning of World War II prevented it from happening.

At the 12th USSR Championship, Botvinnik only shared the fifth and the sixth places, and his position as the country’s best player was put at risk. But at the beginning of 1941, a tournament match for the title of the absolute USSR Champion ended in his triumphal victory. When Hitler attacked the USSR, two days before Leningrad was completely surrounded, Botvinnik was freed from military service because of bad eyesight and evacuated from Leningrad to Perm together with the opera and ballet theatre, where his wife Gayane Ananova worked. In Perm, he worked as an electrical engineer, which was his profession. During the war, Botvinnik won all four championships he took part in: the Masters’ Tournament in Sverdlovsk (now Ekaterinburg), the Moscow Championship of 1943-1944, the 13th USSR Championship, and the 14th USSR Championship, where he set the unbeaten record of drawing four and winning 13 games. After the end of the war, he renewed the talks with Alekhin about a world championship match, but the latter’s sudden death interrupted them. 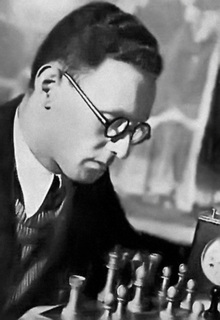 In 1948 FIDE organized a tournament match for the world championship, which ended in Botvinnik’s clear-cut victory, three points ahead of the second-prize winner, Vasily Smyslov. Botvinnik became the Soviet Union’s first world chess champion. The ensuing years saw Botvinnik preparing his doctorate on his main specialty and out of competitions. During this time, FIDE conducted a series of qualifying competitions: regional tournaments, an inter-regional tournament and finally a challengers’ tournament, the winner of which had the right to challenge the world champion to a match. The first Challengers’ Tournament (Budapest, Hungary, 1950) saw Russian grandmasters David Bronstein and Isaac Boleslavsky share the first and second prizes. Bronstein won the right to challenge Botvinnik after an additional match with Boleslavsky. The result of the Botvinnik – Bronstein match was an unexpected draw, with Botvinnik only managing to level the score towards the final. Having won all the previous post-war competitions and demonstrated undisputed supremacy over all other Soviet players, this time he had to admit to being just a “leader among equals.” The next match with the new

Smyslov won the next Challengers’ Tournament and then managed to clinch the world championship from Botvinnik. At a FIDE congress in Moscow, Botvinnik was given the right to a return match, in which he took back the title. Two years later, Botvinnik had to play the next match with a player of an even younger generation, Mikhail Tal. This time Botvinnik again lost his title, and again took it back in a return match the following year. In 1962 FIDE cancelled return matches, deeming that the fact that the champion kept his title after a drawn match, combined with the right for return matches, gave too much of an advantage to the acting world champion. Botvinnik lost the next match with the winner of the Challengers’ Tournament.

He was over 50 years old at the time and refused to compete for the world championship after that. He kept playing successfully, however, at various international competitions, like those in Amsterdam and Hastings. In 1970 he performed successfully in a USSR versus the rest of the world match, beating grandmaster Milan Matulovic. After the end of his tournament career in 1970, 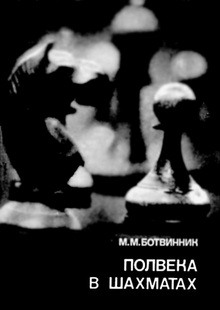 Botvinnik became the head of a chess school for gifted young chess players. He is considered the “patriarch of Soviet chess” and one of the creators of the chess school, who developed his own method of preparation for competitions. He also achieved much in the development of the theory of chess. According to Kasparov “he created a system of debut preparation, where the black, starting from the first turns, plays not to equalize, but to seize the initiative. He proved it was possible! Botvinnik violated positional balance consciously, choosing sharp and critical moves that he had researched at length and achieving perfect results. He created genuine debut systems, but also rethought and presented some of the typical positions in a new light.” Furthermore, Botvinnik enriched the theory and practice of the endgame with valuable and deep analysis. For many years, Botvinnik successfully combined playing in chess competitions with scientific activities in the field of electrical technology. He was an honored worker of science and technology and the author of many inventions registered in many countries. Starting from the 1970s he was a chief developer of a computer chess program, however, he never managed to implement all of his ideas in practice. His books on chess, energetics and cybernetics have been published in English, Hungarian, Danish, German, French, Swedish and other languages. Overall, Botvinnik played 1202 games in competitions, scoring almost 70 percentage points. Of the 59 tournaments he played, he won the first prize in 33, shared the first and the second prizes in six and shared the second and third prizes in 14. He won six out of 13 matches, losing three and drawing four. For his achievements in chess he was awarded the Badge of Honor Order in 1936, the Order of Lenin in 1957, the Order of the Red Banner of Labor in 1961 and the Order of the October Revolution in 1981. Botvinnik died of cancer at the age of 84.