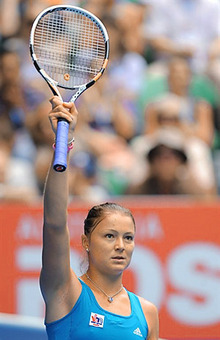 Dinara Safina is a professional Russian tennis player and the second Russian after Maria Sharapova to rank World No.1. She is the winner of the 2007 women’s doubles title at the US Open and a 2008 silver Olympic medalist in women singles. Safina has also made it to three Grand Slam singles finals. She and her elder brother Marat are the first ever brother-sister duo in tennis history to both achieve Number 1 rankings.

From crib to court

Dinara’s destiny was practically predetermined by the history of her family. Her mother, Roza Islanova, was one of the best children’s tennis coaches and Dinara’s brother, Marat, was already training to become the world number one tennis player when she was born.

Safina’s mother began taking little Dinara to the courts where she coached when her daughter was just three years old. The tennis court was her playground at first, but she soon became bored of just watching the other children and picked up a racket. Her mother was her first coach and says Dinara absolutely loved tennis from the beginning.

When Safina was eight, her family moved to Valencia, Spain, to continue her training following in the footsteps of her brother. While he was already making progress, Dinara seemed to be playing in her brother’s shadow. This continued even after she started winning tournaments. “I’ve gotten used to being known as Marat’s younger sister. I’ve never known

anything different so it’s fine for me. Besides, he is bigger and stronger than me, and he has achieved so much more than I have. So until I outdo him, I’m stuck with this reputation,” Dinara said.

The road to success

Safina made her debut in 2002 winning her first title and becoming the youngest champion to win a professional tournament at the age of 16. She also entered the Grand Slam tournament and finished world number 68, but she was still considered Marat Safin’s little sister.

In 2005 Safina played at the Kremlin Cup in Moscow and beat Maria Sharapova, who was the world No. 1 at the time. For Safina it was the first time she ever beat a Number 1. Little did she know that she herself would be the world’s Number 1 in just four year’s time. 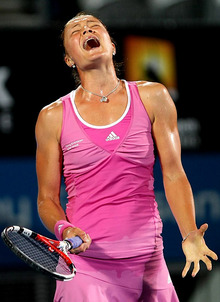 However, before that she had a lot of ground to cover: the US Open doubles title with Nathalie Dechy in 2007, and a year later a silver medal in the Beijing Olympics singles (losing to Elena Dementieva). According to Dinara’s mother, the Olympics silver is just as good as gold, given that Safina had to play three matches in just over 24 hours and was simply exhausted.

Safina admits that after every defeat she calls her mother to cry on the phone. And her mother, who knows firsthand about tennis, is perhaps Dinara’s greatest fan and supporter. Later her mother shared her feelings about the Olympics in an interview. When asked if she felt like strangling the Chinese organizers for scheduling three matches in almost 24 hours for Dinara she said, “You know, what I feel is irrelevant. There is nothing you can do about it – if you are told to play at 1 a.m. you get out on the court and play. In any tournament, Olympics included, the organizers try to schedule events in such way as to benefit their own athletes. It was especially obvious in Beijing, however, they didn’t violate any rules.”

Safina was given a BMW X3 for that victory – and she drives it when she’s on holidays in Moscow. She says she couldn’t train in Moscow because of the traffic – her time is precious, and she’d rather spend it practicing than sitting in traffic jams. She is a careful driver, though, and has never been fined in her life.

From the depth of despair to the top of the world 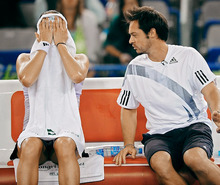 At the beginning of the 2009 season, however, she lost a few games to inferior players and that made her question her ability to play tennis. She was deeply depressed and even thought of leaving tennis altogether, thinking she had nothing left to give. If it hadn’t been for her coach, Zeljko Krajan, who convinced her to keep playing, she probably would have quit. “She had problems with why she didn’t believe in anything. She wondered why she didn’t have confidence. I didn’t have to change anything in her technique, it was fine, it was just the mental part — she had lost all her confidence,” Krajan said.

Safina seems to have surprised even herself. "If someone asked me at the beginning of this year if I could finish the year in the top five, I would have burst out laughing," she said later. Her mother thinks Krajan was exactly the kind of coach needed to bring out the best in Dinara, unlike his predecessors, who were too harsh on her and put her down. 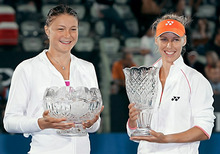 The year 2009 became the most successful for Safina as it brought her the World N. 1 title in WTA ranking. Although she had come very close to the title before she was never able to quite make it to the top. This time, she got it without having to play – her rival Serena Williams just came in second by the total number of points. Safina admitted that this wasn’t exactly the way she wanted to get the title, nevertheless, it still makes her the only Russian besides Maria Sharapova to ever rise that high. She held the title for 25 weeks. Dinara and Marat Safin are the only brother-sister pair in the world to both claim number one rankings. 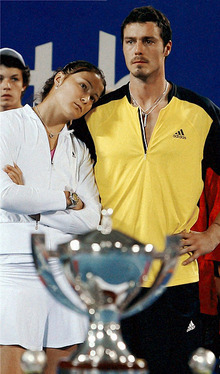 Perhaps this became the turning point for her to finally be recognized by Marat. Unlike his previous rather negative comments about her needing to grow up, etc., he now spoke up for his sister, who was constantly attacked for becoming the world number one without winning a Grand Slam. “She spends so much time on the court. I think she is more professional than all other players put together… Nobody believed that she would be in the Top 10 even two, three years ago. So look where she is right now… She is there. She’s fighting. She’s trying. I’m really proud of her,” Marat has said.

However, when asked if he would ever coach her, he laughed and replied: “Do you want me to hang myself?”

Safina started 2010 by losing tournaments because of a back injury. She has yet to prove she deserves to be number one for more reasons than the lucky coincidence of mathematics. However, one major thing she has proved to the world is that she is no longer just Marat Safin’s little sister, but a world champion herself. “I always wanted to be known as a person by myself. So for me it was always tough when he said I always liked just being his sister. But now I'm becoming famous on my own. So I don't complain anymore. I would say it brings me pride because I'm doing it by myself. I never wanted to be just the sister of someone famous,” says Safina.

Safin retired from tennis and his achievements stopped there. Dinara has a real chance to catch up with him and beat his success. Ironically, it’s now Marat, who has to worry about being known as Dinara Safina’s elder brother.

Dinara and Marat are very close. He had always wanted a younger sibling, so was happy when his parents gave him a little sister. The only bad childhood memory she has of him is when he told her that Santa Claus doesn’t exist. She got over that soon enough though, as he taught her to make wish lists for New Years.

The two are very similar in physique and character – both are tall, strong and temperamental. “Marat has always been an idol for me – and I tried to be like him,” Dinara has admitted. She even tried to copy Marat’s manner of playing with all of the swearing and smashing of tennis rackets on the court, but with time she found her own style. She says she always feels her brother’s support even when he is far away, and he is the first to send a text message to congratulate her on a good game. 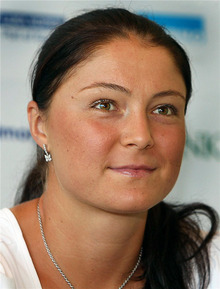 Off the court, Dinara is the total opposite of her brother – she avoids parties and hasn’t been known to date any big names. She loves pretty nails and dreams of opening her own beauty salon some day. As for the man of her dreams – the only criteria she has announced so far is that he has to be taller that 190cm. For now she has her brother’s attention and is very happy. When they happen to be in the same city, they always go out for coffee and have “adult” conversations.

Safina feels she still has a lot to give to tennis. When she was announced the World No. 1 her mother advised her not to stop there and to keep pushing despite the intense schedule, pain and fatigue. Dinara loves tennis and will continue giving it her best in hopes of winning a Grand Slam title someday. But for now all she wants is simply to sleep in the morning.