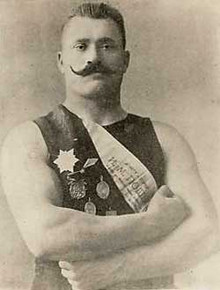 The symbol of wrestling in the first half of the 20th century, “The Champion of Champions”, “The Russian Hercules”, Ivan Poddubny made his sports career last for almost 45 years. The famous images of him flexing his muscles and lifting huge giri (kettlebells) became an icon of what strength can do.  Some historians compared him to the strong men of ancient Greece, and just like them, Poddubny experienced long journeys, epic victories, and changes of fate. And just like those heroes, he spent the last years of his life on the shores of the sea with the woman he adored.

In love with wrestling

Ivan Poddubny was born on October 8th, 1871 in the small village of Krasenivka in the Cherkassy Region (in modern central Ukraine). His family could barely make ends meet. As a child, Ivan did all the hard work of a peasant; he ploughed the land and gathered haystacks. This is where Ivan learned how to tackle all life’s hardships. And his brute strength helped him do it.

When Ivan turned 17, he left his village in search of a better life. He came to the Black Sea Port of Sevastopol in the Crimean Peninsula where he worked as a fitter for seven years. Later, in the mid 1890’s, he moved to Feodosia, another Crimean port. During one of his days off, he came to watch the touring circus. He was mesmerized watching the famous wrestlers of the time like Lurich, Borodanov and Palli. He followed each of the fights with great interest, but two hours after the performance began Ivan could not sit and watch any longer; he wanted to test his strength.

Poddubny stood up and asked to take part in a fight. The referees agreed. The spectators were amazed as they watched Ivan Poddubny defeat his opponents one by one. The last one was Lurich, but it took Ivan two minutes to put his opponent down on his shoulders for the count. According to eyewitnesses, Poddubny was able to explode at a decisive moment, showing great courage. That was the start of his 45-year-long career.

French wrestling (now called Greek and Roman wrestling) at the end of the 19th century was something in between show and competition. Almost every circus called their competition “World Championships” to attract bigger crowds and make more money. For that reason, each tournament could last up to up to a month. As a result, there were dozens of people who called themselves “World Champions”. The situation was sometimes aggravated by the bookmakers and promoters who were doing their best to fix the results they needed. And sometimes the “World Champion” from one city could easily lose a fight in some other circus if he and his “crew” were bribed to do so. That was the harsh reality of wrestling that Ivan had to face. 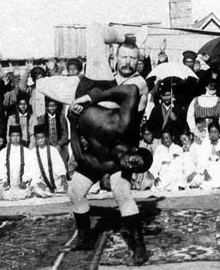 For a couple of years, Poddubny performed in the Truzzi circus in Odessa; the biggest port on the Black sea. He quickly earned the respect of the audience and the reputation of an honest wrestler who couldn’t be bribed. His life in the Truzzi circus was later on depicted in the 1957 Soviet movie “The Fighter and the Clown”. The film features Ivan Poddubny and his friend, a young clown Anatoly Durov, the would-be founder of the legendary circus dynasty. It depicts many circus intrigues, especially the “dirty game” of the promoters. One of them made his fighter rub his body with oil so that Poddubny could not take him into the clinch. In reality this event happened in 1903 in Paris, but the producers of the film wanted to bring all the events of the wrestler’s life “under one roof”. Poddubny still managed to survive in such an atmosphere – the word “champion” became his other name in almost every circus around the Russian Empire.

In 1899, Ivan was invited to St. Petersburg to train in the local athletic society. The target was the 1903 “World Championship” in Paris. At that time, the tournament started to justify its name, because it really united the best wrestlers on the planet. Though the competition was an unofficial one, nobody ever questioned its status. To prepare for the tournament, the St. Petersburg wrestling society hired a French coach, Eugene de Paris. For a whole month, Ivan’s training sessions consisted of fights with 3 wrestlers. The fist one was 20 minutes, the second fight 30, and the third and last standoff lasted 40-50 minutes. Poddubny recalled he could hardly move his hands after such fights. “After that I had to jog for 10-15 minutes with 5 kilo weights in my hands. It was almost an unbearable burden for my feet,” he used to recall. He placed second in 1903 in Paris, losing only to Raul Bouchet, who applied the infamous “oil trick” which later made its way into the film.

However, in 1904 Poddubny had his revenge despite the numerous efforts of the French promoters to fix the results again. There were even plans to poison, cripple, and even kill the “Russian Hercules”.  And when the promoters realized that nothing could stop Poddubny from winning, they cut the prize fund for first place by one third. Ivan Maximovich (as Russian spectators called him by name and patronymic due to the great respect given him) beat the former world champion Paul Ponce and the title holder Raul Bouchet in the finals. Right after the victory, Poddubny demanded his money and said: “I will not go backstage – they will kill me there”

Poddubny beat Raul Bouchet on his home soil a year later, in 1905 in Paris. After losing 10,000 francs, Raul promised that he would get even with Poddubny. But this time he chose other methods; he hired thugs to kill the mighty Russian. For this reason Poddubny had to cancel his tour around Italy and return home via North Africa. Soon afterwards Raul Bouchet died from one of his thug’s own bullets.

After 5 more years of victories, in 1910 Ivan Poddubny decided to quit wrestling and return to his native Krasenivka. He got married, bought several acres of land and built his own house and a couple of mills. However, he proved himself to be a poor landlord and his estate soon went bankrupt. Some said it was because Poddubny never bothered to study; he could not read and write very well. But nobody questioned his honesty. In 1913 Poddubny returned to wrestling to win all the titles one could imagine.

An example for the workers 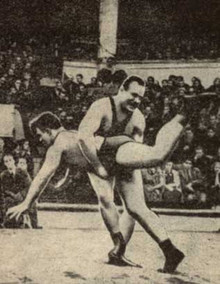 Right after the 1917 Bolshevik Revolution, Poddubny continued his performances in the south of Russia. He survived several attempts on his life by anarchists.  After the Civil War in Russia, the Bolsheviks paid special attention to the circus and all the best athletes, as the government was convinced they would be a powerful propaganda tool. Poddubny got one more chance to enjoy his fame. In 1922 he joined the Moscow circus. He toured Europe and the United States several times. In 1927 he was even proclaimed “the Champion of America”. Promoters in New York City were trying hard to make him stay in the United States for good. But Poddubny stood firm – he wanted to return to his family. More than a thousand people came to see him for his farewell dinner in the Big Apple.

When he returned, he bought a house in the city of Eisk on the Azov Sea. But he never stopped touring around the country. In November 1939 he was given the title of “Honored Artist of the Russian Soviet Federative Socialist Republic” and the order of the Red Banner. He held his last fight in 1941 at the age of 70 – three months before Nazis attacked the Soviet Union.

During WWII he lived in poverty. To make ends meet, he had to work as a keeper in the local billiards room in Eisk, as the city was occupied by the Nazis at that time. After the war, he was not forgotten. In 1945 he was awarded with the title of the “Honored Master of Sports”, the highest title for athletes in the USSR. In 1947 he organized special performances called “50 years in the circus”. Unfortunately, his health was deteriorating. He died in August 1949 in Eisk after a heart attack. Every year after his death, Moscow becomes the venue for the “Poddubny Memorial” a tournament that brings together all the stars of Greek and Roman wrestling. It is a tribute to the champion who was never defeated.

The ladies of his life

All through his life Ivan Poddubny had romances that influenced his career. Historians discovered that he left his home because he could not marry Alyona Vityak, one lady he was very much in love with. Her parents had no wish to let their daughter become the wife of a poor peasant.

In the circus he fell in love with a Hungarian rope-waker named Emilia. She was close to 40 and Ivan was not her only passion. He loved her deeply, and could hardly stand it when she escaped from the circus with one of her rich admirers. This event made him change his circus, and he moved on to perform in the city of Kiev. Poddubny used to say: “It seems that only women can defeat me! They’ve done it so many times”.

In Kiev, Ivan experienced another tragic love affair with a petite gymnast named Masha Dozmarova. At that time his heart was filled with genuine feelings of love. He was about to marry the girl, but during one performance she fell off the rope and died.

There were several thrilling stories after that until Poddubny met his eventual wife Maria. They did not have any children, but Ivan actively helped his wife to raise her son in the quiet town of Eisk on the Black Sea coast.