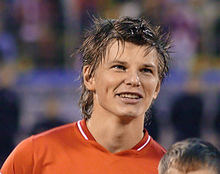 “I can't be infected with a superstar ego, because I was born with it”

Despite being 1.72 meters tall, Andrey Arshavin is the biggest star in Russian soccer. He currently defends the colors of Arsenal in the English Premier League and captains the Russian national squad.

Arshavin’s position on the pitch is forward – or second forward – but he is also often called a “playmaker” as his dribbling skills and a great strike are accompanied by the “beautiful mind” and an ability to assist.

He was born in St. Petersburg, called Leningrad back then, into a typical working class family. It was Andrey’s father Sergey Arshavin who persuaded his son to become a pro soccer player in an attempt to fulfill the dream he failed to achieve himself. 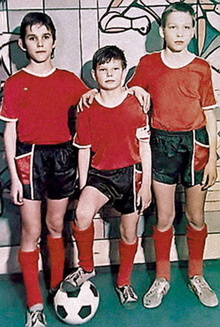 The world might not have known about Arshavin as he had been hit by a car when he was a child, but he recovered and at the age of seven he was recruited to Zenit Saint Petersburg’s soccer academy – Smena.

The young soccer player’s childhood was a difficult one – his parents divorced when he was 12 years old. Yet Arshavin never switched his focus away from soccer and was able to make it into Zenit’s main squad.

Arshavin made his debut in professional soccer on August 2, 2000. Ironically, it happened on English soil. The 19-year-old replaced veteran Andrey Kobelev during Zenit’s 3-0 win over Bradford City in the Intertoto Cup.

The youngster had to wait another year to become a regular in the St. Petersburg team’s starting eleven.

In all, he spent eight seasons with Zenit, scoring 71 goals and delivering 100 assists in 281 appearances in Russian and international competitions. He became a hero for St. Pete fans, who nicknamed him “Shava”, and the real symbol of the club from the Northern Capital.

He was named Russia’s Soccer Player of the Year in 2006, but it were Arshavin’s next two years with the club – when Dutch coach Dick Advocaat took charge – which turned out to be the most successful. 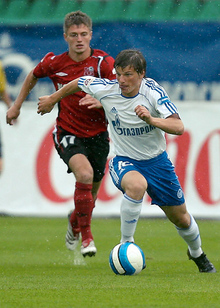 In 2007, the forward led Zenit to the long-awaited championship in the Russian Premier League as the club owned the title just once before, in 1984. Arshavin appeared in each of the 30 league games, putting in 11 goals and delivering the same amount of assists – more than anybody in the league.

He was also very helpful for his team in their successful UEFA Cup 2007/08 campaign. The Glasgow Rangers’ fans considered Arshavin (4 goals and 10 assists) the most dangerous man in Zenit ahead of the Cup’s final game. And their worries proved absolutely right as the forward was instrumental on the pitch of the City of Manchester stadium. He was named the Man of the Match after masterminding both of his team’s goals in a 2-0 win.

The triumph in the UEFA Cup was followed by Zenit’s victory over Champions League winners Manchester United in the Super Cup. The team from St. Petersburg topped the Red Devils 2-1, with Arshavin spending 45 minutes on the pitch.

A month later the player made his debut in the Champions League, but the winning streak of his team in Europe came to an end. Zenit failed to qualify for the group, in which their rivals were giants Real Madrid and Juventus, and Belarusian side BATE. 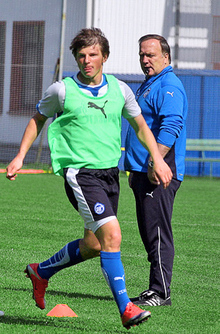 Arshavin appeared in all of the six group stage games, failing to score a single goal. It was obvious that Advocaat was relying on other players at that moment, after Arshavin made his intentions of leaving the club crystal clear.

The player, who believed he had done more than enough for the St. Petersburg team, wanted to try himself at a higher level.

“If I won’t leave the club during the winter break I will be a Zenit player only on paper. I don’t want to play for the club next year and I won’t do it,” he told Sport-Express newspaper back then.

Arshavin’s stunning performance in the UEFA Cup and Euro 2008 made him one of the 29 nominees for the "Ballon d'Or" (The Golden Ball) award, which is given to European soccer players of the year.

A number of top European clubs – including Barcelona, Juventus, Bayern Munich and English sides Tottenham Hotspur and Arsenal – desired to strengthen their lineups with the Russian talent. 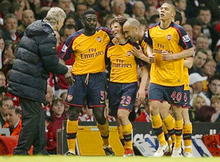 In winter 2009, Arshavin fulfilled his dream of playing in a big European championship, signing with Arsenal. The negotiations between the sides were long and difficult and ended in success only because the English Premier League transfer window was prolonged for one day due to bad weather conditions.

On the same day, Arshavin, who started learning English just recently, gave a famous interview to Sky Sports saying, “It was very hard days for me, but now it doesn't matter, now I am Gooner, that is what is important.”

The nickname of Arsenal is “Gunners” and the Russian’s flub soon appeared on the T-shirts of many of the Londoners’ fans: “Gooner till a die”. 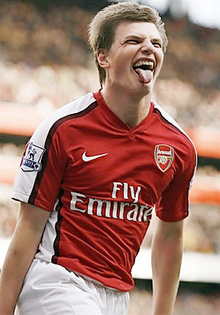 According to media reports, Arsenal paid over £15 million for Arshavin’s transfer, which made him the most expensive buy in the team’s history.

The forward, who has chosen No. 23 in his new club, made his debut for the Gunners in a 0-0 draw with Sunderland on February 21. He opened his scoring account in a clash with Blackburn on March 14.

And on April 21, the “Little Russian” made headlines around the globe scoring an unbelievable four goals in Arsenal’s 4-4 draw with Liverpool at Anfield.

“Guess it was just my day,” the forward, who was named Premier League Player of the Month, explained to Sport-Express newspaper.

Arshvain finished his first season in English soccer with 6 goals and 9 assists in just 15 games and was labeled the Most Effective Player in the Premier League.

The expectations were high from him ahead of the 2009/10 season as Arsenal coach Arsene Wenger said Arshavin could become “an all-time great” for the club.

On August 26, 2009, the forward grabbed his first ever UEFA Champions League, making it 3-1 for Arsenal in a home win against Celtic.

The Gunners were among the English Premier League title contenders throughout the whole year, but Arshavin’s 12 goals and 9 assists weren’t enough to grant him the title, and Wenger’s men finished in third.

Arshavin was first capped for Russia in May 2002 in a friendly against Belarus. However, coach Oleg Romantsev didn’t take him to World Cup 2002, preferring his Zenit partner Aleksandr Kerzhakov. 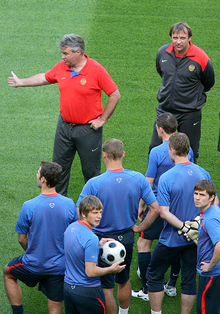 Andrey scored his first goal for his country in another friendly – Russia beat Romania 4-2 in February, 2003. But again, there was no place for the forward in the Euro 2004 squad led by coach Georgy Yartsev.

Arshavin earned his place in the national team’s starting line up only under Yury Semin, whose squad was unable to qualify for World Cup 2006 in Germany.

And it was Russia’s first ever foreign coach, Guus Hiddink, who saw the potential of becoming the team’s leader in Arshavin and made him captain in 2007.

Not without luck, Russia qualified for Euro 2008. But Hiddink had doubts weather to include Arshavin in his country’s squad for the tournament. The forward was red carded in his team’s last qualifier for kicking the Andorra team’s defender and received a ban, which ruled him out from two out of Russia’s three group stage games.

But, in the end, the coach decided in Arshavin’s favor and the Zenit player made a journey to Austria and Switzerland. He first appeared at Euro in a must-win game against Sweden and wasted no time in making an impact, scoring Russia’s second goal in a 2-0 victory.

The quarterfinals against the Netherlands, considered the best team at the tournament by many, became Arshavin’s benefit night as his pace, dribbling and playmaker skills turned out to be too much for the Dutch defense. 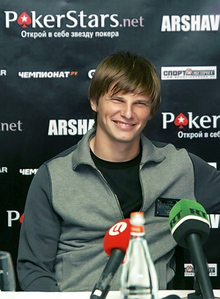 The Netherlands managed to take the game into overtime, but Russia’s No. 10 set the record straight in the additional 30 minutes, helping Dmitry Torbinsky grant Russia the lead and setting the final 3-1 score himself.

“The way Russia played is great. Especially their number 10 – Andrey Arshavin. He had an amazing game. It is his first major finals and he hasn't stopped posing questions for the opposition, as if he has been always doing just that. He had a great season with Zenit Saint Petersburg, but the Euros are another matter entirely,” French soccer legend, Zinedine Zidane, told of his performance after the match.

Despite Russia’s semifinal 3-0 loss to Spain, Arshavin, who was named on UEFA's squad for Euro 2008, left the tournament in the ranks of a brand new star of European soccer.

In June 2008, Arshavin picked the captain’s armband of the national team back up after he was stripped of it after the incident in Andorra. 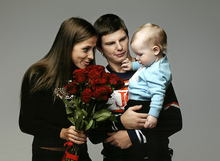 Hiddink’s men missed the ticket to South Africa, losing to underdogs Slovenia in the playoffs. And Arshavin had some problems in getting through the painful defeat.

“[Arsenal manager] Arsene Wenger asked me how I feel and I gave an honest answer – I just do not want to play soccer now,” he confessed to Sport-Express newspaper.

Russia’s new coach, Dick Advocaat, who used to train Arshavin in Zenit, is not planning to refuse the services of the forward in the Euro 2012 qualifying campaign. 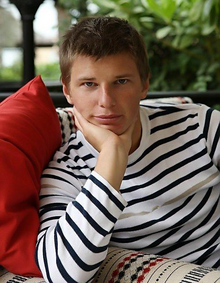 Arshavin has two kids – son Artyom and daughter Yana, but he is not yet married to his long-term partner Yulia.

Since his early years he was a fan of FC Barcelona and never denied the fact he dreams of playing for the Catalan club.

In order to concentrate on soccer, schoolboy Arshavin was forced to give up draughts, in which he showed some skill.

Andrey Arshavin is a writer, who has three books in his resume: “Euro-2008. Guus and His Team. The Diary of Andrey Arshavin”; “We did it! The Story of the Great Victory”; and “Arshavin. 555 Questions and Answers about Women, Money, Politics, Soccer…”

In 2007, he took part in the elections as a candidate for the Legislative Assembly of St. Petersburg for the party United Russia. The soccer player won the elections, but gave up his mandate later.

The luxury village “Arshavinka”, named after the Arsenal playmaker, is now being built near St. Petersburg.

He is also involved in charity work. Arshavin accepted the offer to become the Ambassador of SOS Children's Villages in the town of Pushkin near St. Petersburg.