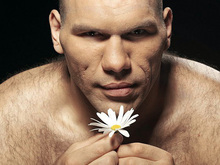 For his outstanding physique (height, 213 cm and weight, 146 kg) he earned the nicknames "The Russian Giant" and "Beast from the East."

Nikolai Valuev was born in Leningrad (now St. Petersburg) on 21 August 1973. He was of average weight and height at birth but quickly began to grow. Nikolai’s parents were of average height. His father was 168 cm. In the first grade Nikolai was already taller than his teacher. In childhood he played basketball and became the junior league national champion.

Nikolai was also involved in athletics. He specialized in the discus throw. But despite his excellence in sports in childhood, it was difficult for Nikolai to play with other children because of his sluggishness.

Nikolai Valuev started boxing rather late, at the age of 20. He received his first training in 1993. His first coach, and eventually his manager and promoter, was Oleg Shalaev. On 15 October 1993 Valuev had his first fight in Berlin against American John Morten. The boxer and his coach did not consider this a professional fight, and soon after Valuev made it to the amateur championships of St. Petersburg and Russia, winning silver in both. In 1994 Valuev was admitted to the national team of Russia at the Goodwill Games. But during the Games an international commission recognized Nikolai’s Berlin fight as a professional one and he was therefore disqualified. Thus, Nikolai had to move on from amateur boxing and start a professional career. 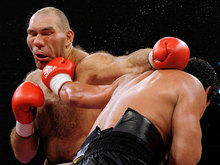 From 1994 to 1996 Valuev fought only five bouts with rather weak opponents. Starting in 1997 he began to appear more regularly. In January 1999 Nikolai, in his fight against Aleksey Osokin, won the championship title of Russia. On 6 June 2000 he defeated Ukrainian Yury Elistratov by points to become the holder of the champion’s title of the Pan Asian Boxing Association. In 2002 Valuev defended his title against another Ukrainian boxer, Taras Bidenko. During the fight Valuev came close to winning by a knockout but still won on points. Overall he was able to defend this title 5 times.

On 26 July 2004, in a battle against Nigerian Richard Bango Valuev, he gained the title of the Intercontinental Champion by the World Boxing Association (WBA).

On 17 December 2005 Valuev won a fight against American John Ruiz and became the first Russian World Champion in the history of professional boxing in the most prestigious category - heavyweight division of the World Boxing Association (WBA). Winning the battle for the championship was not an easy task. After the fight two judges preferred Nikolai, and one judge determined a draw. The result was controversial. At a press conference after the fight Nikolai Valuev said:

"I have been waiting for this moment for 12 years and it finally came. I understood that the battle would not be short. Fortunately, everything ended well. The champion belt is light, but the fighting was hard. Today is a great day for me."

On 7 October 2006 in Chicago Valuev defeated American Monte Barrett to retain the title once again. The fight was so cruel that Barrett’s coach had the battle stopped.


In October 2006, Valuev was awarded the Crystal Boxing Glove prize by the Federation of Professional Boxing of Russia.

On 20 January 2007 Valuev, in his third fight in defense of his WBA title, defeated American Jameel McCline. This battle took place in the arena of St. Jakob Hall in Basel, Switzerland, and was named the "heaviest" in the history of boxing. The total weight of the boxers was almost 272 kg (600 pounds). The battle ended by technical knockout in the third round. McCline refused to continue the fight, referring to a left knee injury. 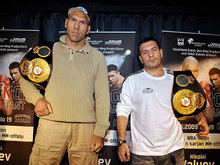 On 14 April 2007 Valuev  suffered the first defeat of his boxing career at the hands of Uzbek boxer Ruslan Chagaev. The fight took place in the Porsche Arena in Stuttgart and resulted in Valuev’s loss of the WBA title. Chagaev dominated the entire match. After the fight Nikolai Valuev agreed with the decision of the judges. The boxer said that his defeat was caused by his physical unpreparedness and his underestimation of his opponent.

On 30 August 2008 in Berlin Nikolai Valuev fought American John Ruiz for the second time in his career. At stake was the vacant WBA title in the heavyweight division. He won the bout by points. The battle was almost equal, but the judges expressed a preference for the Russian boxer.

On 20 December 2008 Valuev defended his WBA Heavyweight Champion title in a fight against 46–year-old Evander Holyfield in Zurich. After a 12-round battle Nikolai won by points. Many experts consider this score controversial. It was Valuev’s sixth Championship win.

On 30 May 2009 in Helsinki, Finland, a rematch was scheduled against Ruslan Chagaev for the WBA champion title. However, the match was canceled after the Uzbek boxer was diagnosed with hepatitis B.

In the summer of 2009 Valuev was declared the full WBA World Heavyweight Champion. 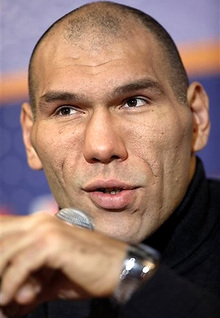 On 7 November 2009 Valuev fought against David Hay to defend his title. The match lasted all of 12 rounds. The judges gave the victory to Hay by points - 116:112, 116:112, 114:114. After the loss it was widely believed that the Russian giant should leave boxing. But Valuev  told the media that he was not going to give up professional sport.

Lately Valuev and his team have had negotiations with the Klitschko Brothers. According to the Klitschko's manager, Bernd Bente, Valuev was offered 2.5 million dollars for the title match. But the Russian boxer rejected the proposal. As a result the battle was canceled.

Today Nikolai Valuev focuses on the development of sport in Russia. In 2003 he and a group of trainers opened "Nikolai Valuev's School of Modern Boxing." Both children and adults can attend the School. Valuev also established the annual Valuev Cup for young boxers. Competitions are held in his native St. Petersburg.

In 2004 the Russian giant became known as an actor. He has four films to his credit. In 2008 he starred in the title role of the film "Rock Head," directed by Philip Jankowski. In the film, Valuev plays a former boxer, who suffers his wife's death. Critics embraced Valuev as an actor in different ways.

“I am handsome” -Valuev 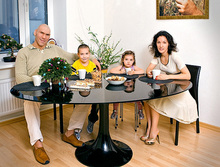 Nikolai Valuev’s enormous strength and troll-like appearance has inspired many jokes and funny stories. They say that Valuev can give anyone a heart attack just by following them from the subway station to their apartment in the dark. But Nikolai takes it with humor, “My wife says I'm handsome. But she adds that a man just needs to be a little nicer than a gorilla.”

He is even okay with his daughter pointing at Shrek and saying, “Daddy, look it’s you!”

Nikolai has a considerable difference in size with his wife (he is half a meter taller and heavier by 100 kilograms) but he is a very caring husband and a loving father. The couple has been together over a decade already. They live in Saint Petersburg with their daughter and son.

Nikolai is also fond of hunting and fishing.