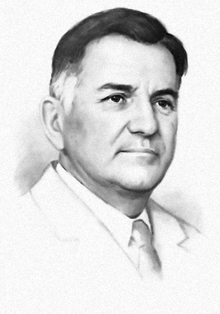 Oleg Konstantinovich Antonov was a Soviet aircraft designer and creator of numerous civilian and military airplanes, including the An-225 “Mriya,” the biggest, heavy cargo-lifting aircraft to date.

Antonov was born into a family of nobility in the village of Troitsy near Podolsk in the Moscow Region. When he was six, the family moved south to Saratov. His interest in aviation began in his younger years. Together with other boys his age he spent time near the local military airbase, studying aircraft wreckage pieces at the airfield and looking for random books on aviation at a local book market. He was an active participant in a school aviation hobby group and by the beginning of 1920s he submitted his first aircraft design to a contest. Despite having no formal education in aerodynamics, his project was approved and published in “Smena,” the most popular Soviet youth magazine of the time.

He entered the Saratov Industrial College where he designed his first flying object – the OKA-1 “Pigeon” glider (‘Golub’). After some slight adjustments, it entered the 1924 Crimea competition and won first prize. Antonov continued his education at the Leningrad Polytechnic University. He had to conceal his noble lineage as he expected it might prevent him from entering. During his studies, he continued to develop the “Pigeon” design, resulting in the creation of the OKA-2 and OKA-3 models.

After graduating in 1930 Antonov was appointed to create the Central Glider Design Office in Moscow and in 1933, he became head of the Tushino glider plant. Over the next five years he created around 30 types of gliders, including the “Rot-Front” series, which reached record flight distances. Overall, the six thousand gliders created by the Tushino plant were used to train over 150 pilots.

In 1938 Antonov was invited to the design office of Aleksandr Yakovlev, the creator of most aircraft used by the Soviet Army during WW2. Antonov became Yakovlev’s lead training glider designer.

During the Second World War Antonov worked at the “Red Pilot” (“Krasny Letchik”) plant and designed a number of troop gliders to deliver supplies to guerillas, including the A-7, which earned him the Patriotic War Guerilla medal. He also created the A-40 “Winged Tank” glider capable of lifting and carrying a light tank.

In 1943 Antonov returned to Yakovlev’s design office and became his first deputy. He spent the next two years modifying the “Yak” fighter, the most widely used Soviet fighter plane at that time. But he never forgot his dream of creating his own civilian airplane and after the war was over, he asked Yakovlev to let him work on his own. He moved to Novosibirsk to head a branch of Yakovlev’s design office at an aviation plant there. In May 1946, the Soviet government transformed the branch into a design office of its own and Antonov became the head designer. The first airplane designed by Antonov’s office is known as the An-2, for which he and his colleagues received the USSR State Prize. The An-2 took its first flight in 1947, became the best biplane in the world, and still flies to this day. It’s the only plane in the world has remained in mass production for over 50 years.

In 1952 Antonov, together with the leading specialists of his design office, moved to Kiev, where they had to practically start from scratch, gathering new staff and creating new production capacities. In 1960 Antonov became a Corresponding Fellow of the Ukrainian Academy of Sciences and by 1967 he was a full member. In 1981 he entered the USSR Academy of Sciences. 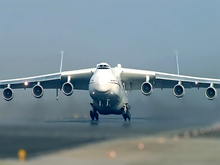 The Kiev office, under Antonov’s direction, created numerous airplanes, including the An-22 “Antaeus” (“Antey”), the world’s heaviest-lifting turbo-prop plane to date. It is as tall as a four-storey building and can lift up to 100 tons of cargo. Some An-22 are still in active service today. He also created the An-124 “Ruslan” which was the heaviest-lifting jet at the time, with a lift capacity of up to 170 tons. Another creation of the Antonov design office was the An-225 “Mriya” (“Dream” or “Inspiration” in Ukrainian) – a monster the height of a six-storey building, with an 88m wingspan, capable of carrying a load of 250 tons over a distance of 4,000 kilometers (around 2,500 miles). Only one of these was ever built, in 1988. A second one is scheduled for completion in 2010, after having spent over ten years in preservation.

Professionals praise the Antonov planes for their ability to lift-off from small airfields, high maneuverability, ability to transport large and heavy vehicles and their relative cost effectiveness. The aircraft designed under Antonov set 243 world aviation records. He implemented some of the fundamental principles of aircraft construction, like the use of compound materials; under his guidance, a system of automated transport plane design was created.

During the 60 years of his work, he wrote about 200 treatises, four books and published dozens of articles in scientific magazines. He holds 72 invention patents.

Oleg Antonov was not only known for his aircraft. He was also an artist and knew a lot about painting. He once said that if he hadn’t become an airplane designer, he would have been a painter. Antonov noticed the connection between technical perfection and artistic beauty. He enjoyed watching as his aircraft became more slender, elegant and harmonious as the work progressed and quoted the French airplane designer Ferdinand Ferber as saying that “a plane has to be beautiful to fly well.”

Antonov was also an avid sportsman. He skied, flew gliders and played tennis and ping-pong. At his design office, he built a specialized tennis complex and a school for young tennis players. He also created the “Gentleman of Court” traditional prize for international tennis tournaments held in the USSR.
He received numerous awards, including a USSR State Prize, the title of Hero of Socialistic Labor and the Order of Lenin. A month before his death in 1984 in Kiev he received the gold Tupolev Medal, the highest award in Soviet airspace construction.

Vladimir Zworykin Zworykin is known for his contribution to the development of many electronic devices, including the all-electronic television.