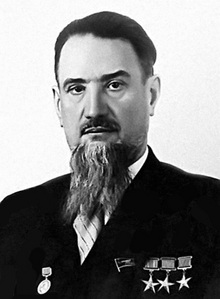 A Russian physicist and one of the main figures in the Soviet nuclear program, Igor Kurchatov is remembered as “The Father of the Soviet Atomic Bomb.”

Igor Kurchatov was born in the town of Sim (Chelyabinsk Region, Russia), but in 1912 his family moved to Crimea. In 1920 Kurchatov entered the Physics and Mathematics Department of Tavrida University. In 1925 he moved to Leningrad and was accepted to work in the physical laboratory of the legendary Physical-Technical Institute, headed by the prominent physicist Abram Ioffe.

Kurchatov started his scientific work by doing research on the peculiarities of dielectrics and was one of the first Soviet scientists to study the physics of the atomic nucleus.

degaussing of combat ships. Kurchatov and his team created a device that helped protect naval vessels from German magnetic mines. The scientist also took part in developing new tank amour, which was improved after changing the structure of the metal protective layer. 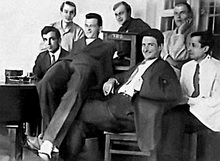 In February 1943 the State Defense Committee tasked Igor Kurchatov to head scientific research on uranium. Kurchatov actively and enthusiastically started working on this task. Thanks to him, in a short period of time the nuclear research laboratory was formed, which is now known as the Kurchatov Institute. In 1944, due to the efforts of Igor Kurchatov, the first Soviet cyclotron, the particle accelerator, was built.

As an enthusiastic scientist, Igor Kurchatov was not satisfied with the bureaucratic obstacles that slowed down research works in his laboratory and quite often he managed to contact Stalin directly. As Kurchatov used to say: “I was like a troublesome fly for Stalin, always bothering him with my niggling buzzing.” 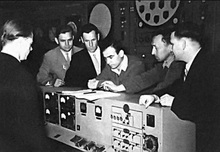 In 1945, during the Potsdam Conference, the President of the United States, Harry Truman, reported that the US had made a bomb that had unbelievable power. Upon his return to the USSR, Stalin ordered Kurchatov to produce a Soviet atomic bomb, in order to restore a balance of forces, and to do it as soon as possible. The ruthless Lavrenty Beria, the head of NKVD (the predecessor of the KGB) was put in charge of the realization of this order. Beria ran a successful Soviet espionage campaign against the United States, which included gathering data about the American bomb known as “Fat Man.” The Gulag system provided tens of thousands of people for work in uranium mines, and construction and operation of uranium processing plants and test facilities.
The project was completed successfully and on 29 August 1949 Igor Kurchatovs’s team detonated its initial test device - a plutonium implosion bomb, called RDS-1 or First Lightning. The bomb is thought to be a Soviet copy of the American “Fat Man.” The test detonation took place at the Semipalatinsk test site (currently in Kazakhstan).
The destiny of Soviet physics and a number of outstanding Soviet scientists depended on the success of the RDS-1. Right after the successful testing, as Kurchatov himself said, Lavrenty Beria made a list of all those who took part in making the bomb. Each person on the list was marked with sanctions (from execution to imprisonment in a camp), which would have been imposed if the project had failed. Luckily, all participants were instead rewarded. Igor Kurchatov, the leader of the project, and Yuly Khariton, the chief designer of the bomb, received the honorary title of Hero of Socialist Labor.
During the atomic bomb program, Kurchatov swore he wouldn't cut his beard until the completion of the program, and he continued to sport a large beard (often cut into eccentric styles) for the remainder of his life, which earned him the nickname “The Beard.” 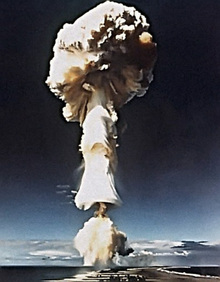 While working on the RDS-1, Igor Kurchatov’s laboratory also developed its own atomic bomb, the RDS-2, which was successfully tested in 1951. It proved to be two times lighter and two times more powerful than the corresponding American device. From 1948 Kurchatov supervised the development of the hydrogen bomb, which was 20 times more powerful than the atomic one. The design of the bomb was based on the ideas of Andrey Sakharov and Vitaly Ginzburg. The first Soviet hydrogen bomb, which was also the first in the world, was detonated in August 1953.
Later, in 1954-1961, Igor Kurchatov’s team of physicists developed a hydrogen bomb called the Tsar Bomba (nickname for AN602), which was the largest and the most powerful nuclear weapon ever detonated and currently the most powerful explosive ever to be detonated in human history. The bomb was tested on 30 October 1961, in the Novaya Zemlya archipelago.
After testing one of the bombs, Igor Kurchatov said: “Now I see what kind of terrible thing we have made. Now we need to make sure that this thing is banned and that a nuclear war is ruled out.” Kurchatov devoted the rest of his life to nuclear disarmament and the peaceful use of atomic energy.

Kurchatov headed the development and construction of the Obninsk Nuclear Power Plant in the Kaluga Region, which started its work in 1954. It was the first civilian nuclear power station in the world. 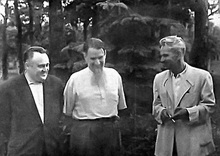 In 1956 Igor Kurchatov took part in a conference in Harwell, the centre of English atomic energy research. According to some experts, his speech on the necessity of international cooperation is thought to be the starting point of the nuclear disarmament process.

Kurchatov died in Moscow from a blood clot in his brain. His body is buried in a place of honor by the Kremlin wall.

Igor Kurchatov was married to Marina Sinelnikova. They did not have children.

Oleg Antonov Oleg Antonov was a Soviet aircraft designer and creator of An-225 “Mriya,” the biggest, heavy cargo-lifting aircraft to date.