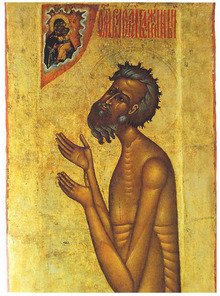 Saint Basil or Vasily (known also as Vasily Blazhenny, Basil Fool for Christ, Basil the Blessed, Wonderworker of Moscow, or Blessed Basil of Moscow, Fool for Christ) is a Russian Orthodox saint of known as ‘yurodivy’ or ‘holy fool for Christ’. He was formally canonised around 1580.


He was born to serfs in December of 1468 or 1469 in Yelokhovo, near Moscow (now in Moscow). It’s believed, he was born on the portico of the local church where his mother prayed for easy birth. He is thought to have died in 1552 or 1557.

St Basil's Cathedral in Moscow is named after the saint. Originally an apprentice shoemaker in Moscow, he adopted an eccentric lifestyle of shoplifting and giving to the poor to shame the miserly and help those in need. He is thought to have had the gift of clairvoyance. Once a man came to the shoemaker asking for good boots that would last him for years. Basil laughed and said the man did not need the boots as he would die tomorrow, and it happened just as Basil said.

He lived on the Red square itself when it was serving as Moscow’s prime market place. Once St. Basil threw about breads of a baker, and the man had to confess he added lime to flour. In 1547 St. Basil came to a cathedral in the center of Moscow and started praying in tears. Next day the Great Fire of Moscow happened, and it started in the church where the saint prayed. 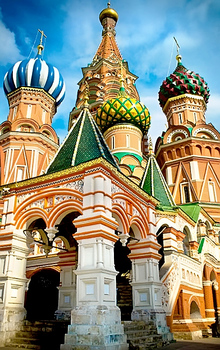 He went naked and weighed himself down with chains. He rebuked Ivan the Terrible for not paying attention in church, and especially for his violent behaviour towards the innocent.

When he died on August 2, 1552 or 1557, St. Macarius, Metropolitan of Moscow, served his funeral with many clergy. Ivan the Terrible himself acted as pallbearer and carried his coffin to the cemetery. He is buried in St. Basil's Cathedral in Moscow, which was commissioned by Ivan IV to commemorate the capture of the Khanate of Kazan. The cathedral is also known as “The Cathedral of Intercession of the Virgin on the Moa”. In 1588 Tsar Fedor Ivanovich had a chapel added on the eastern side above the grave of Basil Fool for Christ.