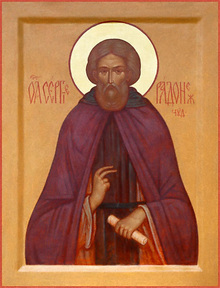 A reformer of the monarchism in Russia, and a religious and political figure, Sergius of Radonezh is highly honored by the Russian Orthodox Church and is considered a saint. The date of his birth is unknown. He died in 1392.

Sergius of Radonezh was born into the family of a boyar (noble man) named Kirill and his wife Maria, who lived in the village of Varnitsy near the town of Rostov. He was originally baptized as Varfolomey, receiving the name Sergey years later, after he became a monk.

Historical records mention different years in which Sergey may have been born: 1313, 1318 or even 1322. The Orthodox Church traditionally commemorates 3 May 1314 as Sergius of Radonezh’s birthday.

At the age of ten young Varfolomey, together with his two brothers, went to a church school. Unlike his brothers, Varfolomey was not successful in his studies, much to his parents’ regret. The boy’s life was greatly changed after one very unusual event, described in all biographies of the saint.

Once, Varfolomey was sent by his father to a field to look for horses. While walking, the boy came across an oak tree, where he noticed an old ascetic monk. During their conversation Varfolomey 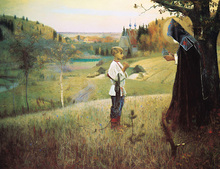 asked the monk to pray for his learning skills. He received a blessing for education and, more importantly, for understanding the Holy Scriptures. Having been invited to the boy’s house, the old prophet told the parents that their son would reach a high position in the eyes of God and the people and would lead a righteous life.

In 1328 Varfolomey’s family, having grown poor, had to move to the village of Radonezh, currently situated in the Moscow Region. Soon after that the parents made a decision to go into a convent and joined the Khotkovo-Pokrovsky Monastery. Upon their death, Varfolomey went to the same monastery, where by that time his older brother Stefan had already begun to serve.

Seeking the strictest way of a monk’s life, including living in a desert, Varfolomey convinced his brother Stefan to leave the monastery and move to the wild forest near the Konchura River. In 1335 they built a little wooden church in the name of the Holy Trinity. At present there is a cathedral on the same spot where the church was situated.

Finding these conditions of life too difficult, Stefan soon left and went to the Epiphany Monastery in Moscow. Varfolomey stayed on alone, continuing his ascetic life. He soon took the monastic vows and received the name of Sergius (Sergey). 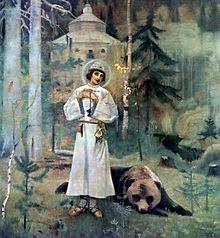 A few years later many monks came to live in Sergius' secluded place. In 1345 the Trinity-Sergius Monastery was formed. Almost two centuries later, in 1742, it received the status of lavra (the name of the largest cells in Orthodox Christianity). Sergius became the priest and the second hegumen (head) of the monastery, setting an example for other monks with his humble and hard-working life.

Sergius' name quickly became well known. The monastery was visited by many people, both rich and poor. Some of them settled nearby and donated all their property to the church. Although originally needy, the Trinity-Sergius Monastery became rich in a short period of time. Sergius' fame reached as far as Constantinople, the center of Orthodox Christianity at the time. Philotheus, the Patriarch of Constantinople, sent Sergius gifts (a cross, a scapular and a schema), along with a letter, praising Sergius' righteous life. The Patriarch advised Sergius to implement a strict coenobitic order, which implied communal life for monks. Following this suggestion, Sergius set the consuetudinary (rule of a communal life), which was later it was accepted in many Russian monasteries.

Sergius became known for his sincerity by practicing the principles that he taught. He worked hard, cutting trees and logs, baking and cooking and making clothes and shoes for himself and other monks. Sergius strongly believed that a monastery should provide for itself and not rely on offerings. The Metropolitan, Aleksey, deeply respected Sergius of Radonezh and wanted him to become the next Metropolitan of Kiev and All Russia. The monk kindly refused this opportunity, preferring to continue his simple way of life. 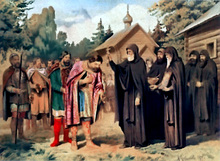 Sergius' public activity earned him much respect from both high authorities and ordinary people. According to witness accounts, Sergius of Radonezh had very good communication skills and could find calming words for any hardened and tough heart. He reconciled the hostile princes of the Rostov, Novgorod and Ryazan regions. Historians say that thanks to Sergius, by 1380 most of the Russian princes recognized the power of Dmitry Donskoy, the Prince of Moscow. This unification of the country helped to gather the best army forces for the well-known Battle of Kulikovo, fought by the Tartar-Mongols and the Russians on 8 September 1380.

As the legend goes, before the battle the Prince of Moscow gathered his princes and generals and went to Sergey to pray and receive his blessing. The saint predicted a victory for the Russian army and also sent his two monks, Oslyabya and Peresvet, to help. Dmitry turned his army towards the Tatars, but during the approach to the River Don he began to hesitate whether to cross the river or not. Soon the Prince received a letter from Sergey encouraging him to attack the enemy as soon as possible. The battle started with the fight of two strong men: the Russian monk Aleksandr Peresvet and the Mongol-Tatar knight Chelubey. Both warriors struck each other with heavy spears and dropped dead on the spot. After their fight a great battle surged, resulting in the complete victory of the Russian army.

After the Battle of Kulikovo, Dmitry Donskoy respected Sergius all the more. In 1389 the monk was invited to validate the Prince of Moscow’s last will and testament, which made legitimate the succession of Dmitry’s eldest son to the throne. 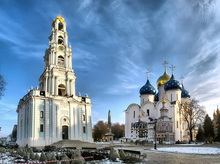 Apart from the Trinity-Sergius, Sergius of Radonezh founded several more monasteries, among them Staro-Golutvin, Vysotsky and Georgievsky. His disciples were appointed as Fathers Superior of all these places. Sergius' followers founded about 40 monasteries in the northern part of Russia, spreading Christianity and strengthening the church’s position in the area.

Having reached a great age and foreseeing his own death, Sergius of Radonezh appointed his faithful disciple Nikon to be the next hegumen. Sergey’s last words to his followers were: “above all things have a fear of God, a clean soul and unfeigned love.”

Sergius of Radonezh died in 1392, and from then until the present time the Orthodox Church has honored him as a saint. Sergius was buried in the Trinity-Sergius Monastery.