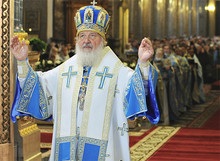 Kirill I (secular name Vladimir Gundyaev) is the acting Patriarch of Moscow and all of Russia. Russians’ attitudes towards him are ambiguous: the Orthodox Church has prospered under his leadership, though many people say this prosperity is based on corruption.

Vladimir was born in 1946 in Leningrad (now St. Petersburg), into the family of a priest and a teacher. He is the first Russian Patriarch to have been born in atheist Soviet Russia. At school, his religious views prevented him from becoming a Pioneer and later a member of the Komsomol, which led to conflicts with the school administration.

In 1965, Vladimir received his school diploma and was set to make a choice between the Physics Department and the Leningrad Ecclesiastical Seminary. His confessor gave him his blessing to become a priest, saying that there were already enough physicists in the country. After graduating from the Seminary, Vladimir attended the Leningrad Ecclesiastical Academy. As a student, Vladimir took part in the fourth assembly of the World Church Council and the All-Christian Peace Congress. He represented the Moscow Patriarchy in the international Orthodox Youth Organization Syndesmos and, for that reason, was granted the right to travel abroad.

In 1969, Vladimir took his monastic vows and was renamed Kirill. Since then, he has gone up and up the church career ladder. In 1989, archbishop Kirill was elected chairman of the Department for External Church Relations and became a member of Holy Synod. Two years later, he was chosen to become the metropolitan of Smolensk and Kaliningrad.

At the enthronement ceremony for Kirill, the Patriarch of Moscow and All Russia. (Photo from kremlin.ru)

In 1997, the popular newspaper “Moskovsky Komsomolets” published a series of articles about how the Russian Orthodox Church imported and sold cigarettes. According to these publications, by 1996 church authorities controlled 6.6% of the Russian tobacco market. This was possible because of a decree issued by the government in the early 1990’s, which let the church import excisable goods without paying customs duties, in a move designed “to help” the religious establishment. Kirill was named as the organizer of the whole scheme. He admitted that he acted on behalf of the Church, but insisted he had no vested interest. He did not sue the journalist though, and quoted the Bible when asked why, “If someone strikes you on the right cheek, turn to him the other also”. Nevertheless, smoking is considered a sin by the Orthodox Church.

After the death of the Patriarch of Moscow and all Russia Alexy II in 2008, Kirill was chosen to replace him in that post. He was appointed in February of 2009.

In Soviet times, the Church was totally controlled by the state. Today, Russia is still a secular country, but the Church keeps interfering in state affairs. The Church’s representatives have the right to participate in the development of different secular laws, especially in educational and cultural spheres. On TV, one can often see the president or some government officials meeting with Church officials, discussing all kinds of initiatives with them.

Some citizens approve of it, some don’t, and both groups have their reasons. Some people are glad to see religion taking its place in peoples’ lives after seventy years of atheism. They welcome the new religious holidays and want their children to study Orthodox Culture at public schools. Others are not so happy, saying the border between religion and obscurantism is very thin, and it’s too easy to cross it. 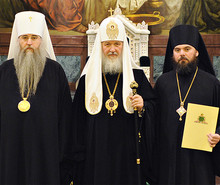 Many members of government agencies also have ecclesiastical ranks. Others are not ordained, but serve in the church regularly too. Their religious views interfere with their work. For example, Vitaly Milonov, a member of the St. Petersburg Legislative Assembly and the deacon in one of the St. Petersburg churches, developed a law forbidding "the propaganda of homosexuality” and used the phrase “being gay is a sin” as the main argument at public hearings.

Of course, there is a bright side. The Church participates in charity drives and restores the temples. Many parishes have volunteer organizations which work in orphanages and senior homes. As in any other organization, everything depends on the people.

Those who stand against the extension of the Church’s influence also point out the incredible wealth of the church hierarchs. Their cars and houses look quite impressive, especially against the background of public sector employees and pensioners or common priests from further districts of the country. New churches are built in the most prestigious parts of cities. Kirill, wearing a Breguet watch (which costs about 30 thousands euros), is often contrasted with the late Serbian Patriarch Pavel, who was a nonpossessor.

Kirill has been the Patriarch for only a few years, and it is too early to estimate his role in Russian religious life.  Perhaps he will be the one to renovate the Church and to revive true Orthodox faith in people’s hearts, or maybe he will turn the Church into a fortress of superstition, lies and ignorance. Only time will tell.