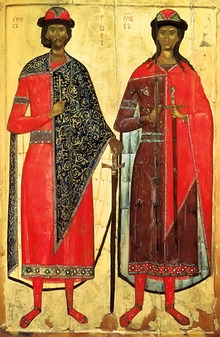 Boris and Gleb were the first saints of Kievan Rus after the Baptism of Rus by Saint Vladimir, the grand prince of Kiev who converted the land to Christianity in 988.

According to 11th century book the Lives of Boris and Gleb (by Nestor the Chronicler and Jacob the Monk), they were children of Vladimir the Great, who loved them more than his other children.

Both were murdered during the internecine wars of 1015-1019, and their remnants were said to perform miracles. Both were canonized by Russian Orthodox church in Rus in 1071. They were interred at the Vyshhorod Cathedral, which was later named after them.

The two princes were used as an example to canonize emperor Nikolay II and his family in 2000. According to metropolitan Uvenaly Russian theological literature started using the word “horrorbearers” after Boris and Gleb and is applicable to those of the Russian saints that like Jesus Christ underwent physical and moral tortures followed by death from their political rivals.

The Primary Chronicle says that their mother was Bulgarian. Most modern scholars, however, argue that Boris and Gleb had different mothers, and were of different ages. Boris, who had been already married and ruled the town of Rostov Veliky, was probably regarded as heir apparent to the Kievan throne. Gleb, who was still a minor, ruled the easternmost town of Murom. 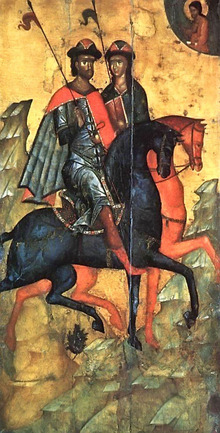