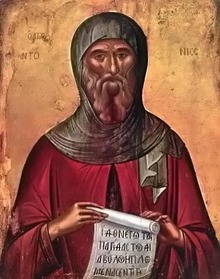 St. Anthony of the Caves, also known as Antony Pechersky, established the first Russian monastery known now as Kiev Pechersk Lavra, and is considered to be the father of Russian monasticism.

He was born in the town of Lyubech north of Kiev and was baptized with the name “Antipas”. He was drawn to the spiritual life from an early age, and when he got older he left for the Greek Orthodox Esphigmenou Monastery on Mount Athos to live as a hermit.

There, he lived in a secluded cave overlooking the sea. In 1051, the abbot gave Anthony the job of expanding monasticism in his native land, which had only recently begun its conversion to Christianity.

Anthony returned to Kiev, and was ordered by local princes to found several monasteries based on the Greek model.

These monasteries were not as austere as Anthony was used to from his time on Mount Athos. He traveled through many of them and was surprised how busy the monks there were with daily matters instead of prayers and service. Anthony did not stay in either of the monasteries, but chose the life of a hermit in a cave once used by robbers as a hiding place.

In 1015 his peaceful austerity was interrupted by the death of Vladimir I of Kiev, and the subsequent fratricidal war for the throne between Vladimir's sons Yaroslav and Sviatopolk. They tried to revive the old pagan traditions and beliefs, and that forced Anthony to return to Mount Athos. Soon his was ordered by church authorities to go back to his Motherland. 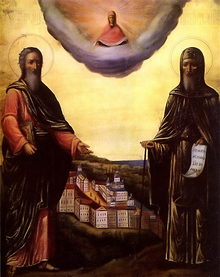 The second return differs from the first one drastically – the man did not wander through monasteries in search of spiritual guidance, but walked to the hills near the busiest city of that time, Kiev, and settles in a small four-yard cave which had been dug by the presbyter Hilarion in woods on the Dnepr river bank. There he prays and fasts.

The fame of a holy man living quietly outside of the city spreads fast and soon many followers inhabit the caves around and build the first church underground. With new people joining the monastery new caves had to be dug, and strict monastic rules were introduced. Anthony always denied to be called a priest and never took any church rank, he never lead the new community of monks but only guided them with his faith and wisdom.

As the conventual community grows, Antoniy has to lead the people out of the caves and start to build a church on a hill given to the monks by the ruler of Kiev Izyaslav.

Local peasants, artisans, poor folk and nobility came to Anthony for advise and blessing. Once when Izyaslav and his brothers faced a popular uprising, they came to Anthony for his blessing. They did not get it. Anthony foretold that because of their sins they would be defeated. Izyaslav was planning to send Anthony to exile but before he could do so, Izyaslav's brother, Svyatoslav, arranged for Anthony to be secretly taken to Chernigov. When the conflict ended, the holy man was secretly sent back to Kiev. 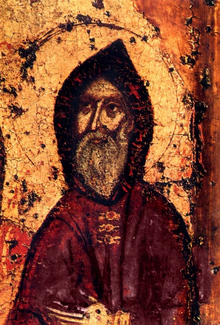 The burial place of Anthony of the Caves is not known. He prohibited the monks to search for his remnants, and attempts to do so twice failed. The historical scripts of that time say, first time the monks digging in the caves to recover the body of St.Anthony saw a column of fire descend from the sky and that blinded the diggers, and the second time the cave was flooded.