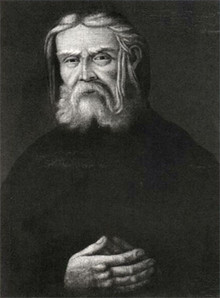 The Great Russian Saint Seraphim of Sarov (Sarovsky) is one of the most renowned monastic figures and the great spiritual teacher in Russian Orthodox history. He was one of the few saints who attained the highest level of spiritual perfection by the ascetic acts of living as a hermit, spending hours in meditation on a column and taking vows of silent seclusion.

Seraphim Sarovsky (real name Prokhor Moshnin) was born in the town of Kursk to a respected merchant family. Seraphim’s father died when the boy was only three and he was brought up by his very religious mother. Many people noticed that the boy was a very special, deep child.

When Prokhor was nine years old he became very sick and doctors thought he would not recover. But one day, while the boy was asleep, Virgin Mary came to him. She promised to visit him and heal his sickness. And truly, during the sacred procession, an icon of Our Lady of the Sign was carried past Prokhor's house, and his mother let him touch the icon, which healed him completely.

Prokhor loved to go to church and read Lives of Saints and other spiritual books. When he was 17 he decided to become a monk. He was told by a holy hermit to go to the Sarov Monastery. There he worked at the bakery and in the carpenter's shop. He always kept himself busy and found joy in working. When he had free time he would go to the woods to pray. Everyone loved him. He was quiet, meek and obedient, and his heart was always turned towards God. 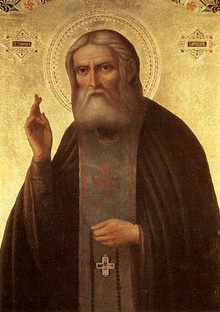 Once he became very ill again. For more than a year he lay in bed, but never once complained. Again, the Virgin Mary came to him, this time together with the Apostles Peter and John. She pointed at the sick Prokhor and said, “This is one of our kind,” meaning that he was already like a saint. Shortly after this he was completely healed once again.

At the age of 27, Prokhor became a novice and given a name which meant  “flaming” or “burning”, Seraphim, on entering the Monastery of Sarov  in 1777. His mother blessed him with a large copper crucifix, which he wore over his clothing all his life. From day one in the monastery, exceptional abstinence from food and slumber were the distinguishing features of his life. He took a very modest serving of food every day. On Wednesdays and Fridays he ate nothing. Indeed, his heart was always burning with love for God. God strengthened him with heavenly visions. Through prayer and labors of religious services, Seraphim became worthy of seeing angels, both serving and singing in church. Once he saw Jesus Christ shining brighter than the sun.

At the age of 3l, he became a priest and for a long time conducted services and received Holy Communion every day. A year later, like the ancient desert-dwellers, St. Seraphim went to live alone in a dense pine forest. Next to his dwelling he planted a vegetable garden. He also kept bees. Matrona Plescheeva witnessed how St. Seraphim fed a bear that had come to him out of his hand. Even while he worked, St. Seraphim was always praying. Every day he read several chapters from the New Testament. In this way St. Seraphim spent weeks alone in the forest, praying, fasting and working in his garden. On feast days and on weekends he visited the monastery and attended the services there. 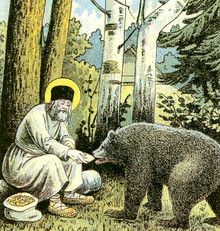 Seraphim of Sarov feeds a bear. Fragment of a lythography Way to Sarov. 1903

One of the most dramatic incidents happened when Seraphim was attacked by robbers. Many of them, knowing that Seraphim was often visited by rich people asking for advice, decided to rob his cell. Catching him in the woods in the middle of a prayer, they savagely beat him. Seraphim, though a young and strong man at the time, did not fight back. The robbers didn't find anything in the cell and departed. Seraphim miraculously recovered, but was hunched over for the rest of his life. When the robbers were caught and put on trial, Seraphim forgave them and let them go.

St. Seraphim returned to the monastery in 1810, but lived in seclusion until 1825. After that, he opened his doors to visitors who sought his spiritual guidance. Even Emperor Alexander I came for his blessing. Seraphim did not need the visitors to tell about themselves, as he could see through each of them. St. Seraphim helped people in many ways. He anointed the sick and they became well, he helped poor peasants to find what had been lost or stolen, he comforted the grieving ones, and brought sinners to repentance. When people thanked him for what he had done, he told them, “Do not thank me. I am only the servant of Jesus Christ.”

St. Seraphim was also the spiritual leader of the Diveevo Woman's Convent.
The Diveevo Convent of the Holy Trinity was founded by rich aristocrat Agatha Melgunova (later sister Aleksandra). After a vision of the Virgin Mary, she ordered the area surrounding Diveevo to be cleared for the construction of a women’s religious community. In 1767, the construction of a stone church in honor of the icon of the Mother of God of Kazan began. As sister Aleksandra drew closer to the end of her life, she asked the elders of Sarov not to leave her fellow sisters without spiritual guidance. When the time came, St. Seraphim took on this responsibility.

Twelve times in his life St. Seraphim had visions of the Virgin Mary, with her last appearance to inform him about his impending passing. He died in 1833 in the monastery during a prayer.