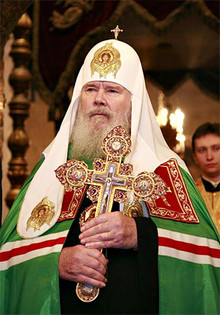 Patriarchal service on the commemoration day of holy hierarch Philip, Metropolitan of Moscow (Photo from http://www.patriarchia.ru/)

Alexy II (secular name Aleksey Ridiger) became the Patriarch of Moscow and all of Russia right before the collapse of the Soviet Union. During the Soviet regime he did much to protect the Orthodoxy from persecution, and when the epoch of atheism was finally over, he put his efforts into the revival and renewal of the Russian Orthodox Church.

Alexy II was born in Tallinn, Estonia into a family of Russian nobles who fled Russia, saving themselves from the Bolsheviks and the horrors of the Civil War. His parents were very religious and in those days, Estonia, overflowing with Russian emigrants, became an Orthodox spiritual center. As a child Aleksey went to church regularly and accompanied his parents on various pilgrimages. At the age of six he began to serve in the temple.

Many people think that all forms of religion were completely banned in the USSR, but this is not true. After the 1917 revolution, the authorities began fighting what they called "religious superstitions", arresting priests and demolishing churches. However, the Great Patriotic War of 1941 put an end to this policy. It seems the famous aphorism “There are no atheists in foxholes” proved itself true, and faith in communism was considered not enough to put hope and courage into people's hearts. The revived church existed under strict governmental control and was far from powerful, but also far from illegal.

In 1947 Aleksey entered the Leningrad Theological Seminary, and after graduating in 1949 he entered the Leningrad Theological Academy (now Saint Petersburg Theological Seminary), which he would graduate from in 1953. In 1950, during his first year, he was ordained as a priest and was assigned to be the rector of the church in the Estonian town of Jõhvi. The future patriarch continued his studies as an off-campus student and graduated in 1953.

Standing up for the Faith

In 1961 Aleksey took his monastic vows and was named Alexy in honor of St. Alexius, the ancient Metropolitan of Kiev. The same year he was chosen to be the bishop of Tallinn and Estonia, and immediately faced a serious problem. The Religious Council, a secular organ in charge of church affairs, decided to close the Pühtitsa Convent, declaring it “unprofitable” and to give the building away to a sanatorium. In reality, Nikita Khrushchev, leader of the Soviet Union at the time, had just launched one more attack on religion. 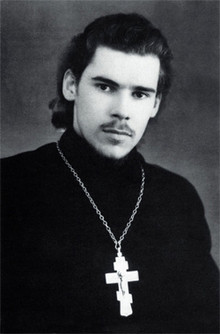 To save the convent, Alexy invited a group of Lutheran Church hierarchs from the German Democratic Republic, the socialist part of Germany, to visit it. After an article about the visit appeared in GDR magazines, Alexy sent similar invitations to the French Protestant Church, the Christian Peace Conference, and the World Council of Churches. After several tours and publications, the Soviet government changed its decision: it was decided not to spoil the Soviet Union’s image by destroying the now world famous piece of architecture.

A similar incident occurred when the Aleksandr Nevsky Cathedral in Tallinn was to be turned into a planetarium. Alexy reminded the Council about the German occupation of Estonia in 1941, during World War II. The Germans closed the temple, and in 1944 when the Soviet army came to drive them out of country, the Nazis tore the bells off the cathedral’s bell-tower as a good-bye gesture. “German revanchists will be glad to know that the Soviet regime finished their work”, Alexy said. His argument was considered convincing enough. The cathedral was left untouched. Alexy protected a total of 64 Estonian churches from being turned into clubs, factories, or warehouses.

In 1961 Alexy also became assistant chairman of the Department for External Church Relations. He participated in the World Council of Churches assembly in New Delhi and became a member of that Council as well. Later he would frequently take part in international Christian forums and conferences.

In 1964, Alexy was promoted to archbishop and assigned to be Chancellor of the Moscow Patriarchate. In this position he made baptism more accessible for the Soviet people. It was not prohibited in the USSR to be baptized, but local authorities usually built obstacles of all kinds for those who wanted to be christened. For example, in the Ufa eparchy, Bashkortostan republic, one had to hand in a written application for the ceremony to the local administration signed by two witnesses to confirm that the bearer was psychologically healthy. Alexy’s complaint to the Religious Council stopped this practice. 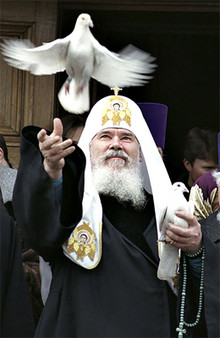 In 1968, he became the metropolitan of Tallinn and Estonia. Working in two republics at once, he spent these years traveling from Russia to Estonia and back, feeling like the “Moscow-Tallinn” train was his real home.

In 1985, the first President of the USSR Mikhail Gorbachev started his program called perestroika. He mitigated censorship, allowed ownership of private property, and began to revive the market economy. Alexy welcomed the reforms. Hoping the changes would affect state-church relations, he wrote to Gorbachev, talking about the separation of church and state and the importance of making these two institutes work together as equals. Gorbachev did not share his views. Alexy was forced to leave the post of chancellor and to become the metropolitan of Leningrad and Novgorod instead.

In 1990, Alexy was chosen to be the Patriarch of Moscow and all of Russia. He was the first Soviet Patriarch elected by secret ballot and without governmental pressure.

Alexy led the Russian Orthodox Church in hard times, and had to participate in political life, too. He criticized the attempted coup in 1991, and during the political crisis of 1993 organized peace negotiations between the executive and legislative powers.

Headed by Alexy, the Church returned to active public service and began to cooperate with different secular institutions such as the healthcare and social security systems, the army (the Patriarch brought back the chaplainship), cultural organizations and many others. Through his efforts, the majority of Orthodox temples in Russia were returned to the Church. The most famous example of this was the return of the Temple of Christ the Savior in Moscow, which had been demolished. It was totally rebuilt in 1994 - 1997.

Under Alexy’s leadership, the Church glorified new martyrs; those who had suffered for their faith in the Soviet times. Emperor Nicholas II and his family, executed by the Bolsheviks, were added to this list, too.

However, there  are several grey areas in Alexy’s biography. For example, in 2001 the "Moscow News" newspaper published an article, which stated that in 1950 Alexy was married and divorced the same year. Also, Alexy and his bride gave their vows during the week of Easter, when it is prohibited to marry without special permission. It seemed that Alexy wanted to be ordained as soon as possible, and while being married in Orthodoxy is not necessary to receive an ecclesiastical rank, it is nevertheless preferable. Five days after the wedding, on April 15, Alexy became a deacon, and two days later – a priest. His wife’s father was the archpriest of Tallinn, so such speedy career development was not implausible for Alexy. 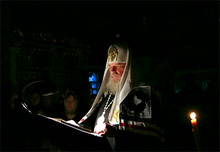 Patriarchal service with the reading of the Great Canon of St. Andrew of Crete, on Wednesday the first week of Lent. (Photo from http://www.patriarchia.ru)

But what was the reason for his haste? Nobody knows for sure, but soon after Alexy was ordained, the spring military draft started, and in those days priests were not subject to military service.

Alexy did not refute the article, but the official biographies are completely silent about this episode of Alexy’s life.

Many researchers are sure that in Soviet times Alexy worked for the KGB under the codename “agent Drozdov” and reported against his fellow priests and parishioners. According to the works of Christopher Andrew and Vasily Mitrokhin, In 1975, Alexy headed the “Rodina” society, which officially helped to maintain the cultural connections between the USSR and Russian emigrants, but actually served as a cover for KGB work. This was never confirmed either by the government, or by Alexy himself, but there are documents pointing out this fact. According to them, this collaboration saved Alexy from repressions and helped him to become a religious leader. When other hierarchs were exposed as KGB agents, Alexy advocated for them, saying they had sinned to save the Church.

Patriarch Alexy II died of a heart attack on December 5, 2008.