The word Perestroika is used to describe the time of deep modernization in the USSR from 1986-1991 initiated by Mikhail Gorbachev , the last Soviet leader.  It followed the years of stagnation in the world’s biggest country, and actually was a result of a crisis that permeated the entire Soviet society. The one-party, one-candidate political system upset citizens who saw the democratic process in action throughout Europe and the . Administrative management was dictated by decades-old regulations and outdated methods. Soviet military forces were scattered throughout the world in attempts to maintain communism. Mikhail Gorbachev surprised the entire world with his announcement of Perestroika, entirely changing the political landscape of the Soviet Union. Perestoika (literally meaning “rebuilding” or “restructuring”) was thought to bring crucial changes to the life of all Soviet people, to “restructure” the Soviet political and economic system. It opened the Soviet Union to the World and the World - to the Soviet people, but also led to economic fiasco and a fatal division within the Soviets themselves; the political and national interests of its parts collided and eventually Perestroika ended with the collapse of the USSR in the 1991.

Perestroika was and remains nowadays one of the few Russian words that foreigners from around the globe know quite well - in the late 1980s, the eyes of the whole world were on the Soviet Union.

No one could say at that tough time what the new power would look like, but everybody knew that it was the end of an old regime; such was Perestroika. 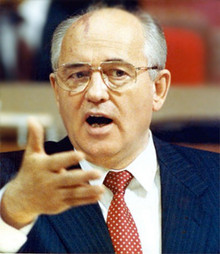 Some sources list March 1985 when Mikhail Gorbachev came to power as the beginning of Perstroika. He indeed was the man who launched it; he has become known world-wide known as the “father of Perestroika”. Gorbachev first used the term in his report on economic reform delivered just days after taking the county’s top post. But during the initial period, Gorbachev’s reforms were similar to those of previous regimes, repeating their fatal mistakes: transforming the already existing Stalinist system, the so-called policy of uskorenie (or “acceleration”) didn’t bring any considerable, fundamental change.

It was only in early 1987 that the motto became a full-scale campaign and start yielding practical results. At the Plenum of the CPSU Central Committee in January, Perestroika was actually proclaimed an official state ideology.

Initially meant to affect the economy only, step by step Perestroika started to penetrate all spheres of people’s lives and changed them dramatically.

The ’s planned economy became the key target for Perestroika’s machine. Seeking to bring the up to economic level of the developed capitalist countries, Gorbachev decentralized economic controls and encouraged enterprises to become self-financing. The 1987 Law on State Enterprises allowed them to set their own prices and wages. 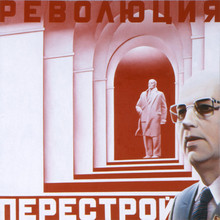 The Law on Cooperatives, enacted in May 1988, was perhaps the most radical of the economic reforms during the early part of the Gorbachev era. For the first time since Vladimir Lenin's New Economic Policy, the law permitted private ownership of businesses in the services, manufacturing, and foreign-trade sectors. Soviet people witnessed the first cooperative restaurants, shops, and manufacturers.

These and other reforms were driving the country to a free market economy, gradually eliminating the total control of the communist party. But Gorbachev went further: he turned to Western capitalist countries for financial assistance, and foreigners started to invest in the Soviet economy.

Gorbachev refused a one-sided election system and decided to involve the people in the political process. This resulted in a general election in 1989 to decide the Congress of People’s Deputies - for the first time ever the citizens of the Soviet Union got to elect their country’s administrative officials making their choice of candidates, including non-communists!

Gorbachev began withdrawing forces from Afghanistan, and allowed the freedom of religion and freedom of speech that so many other countries already enjoyed. The Soviet people became freer to act as individuals, something they were deprived of for many decades.

In a country where the affairs of state had been conducted behind closed doors for years, politics became more open and the politicians themselves younger and closer to ordinary people. Mikhail Gorbachev was the first Soviet leader to meet with the public, face to face, in a spontaneous manner. This was a sensation. Soviet television gave wide coverage of Gorbachev’s endless trips. People loved their leader, who quickly turned to a kind of TV star, and welcomed his reform intentions.

But there was a catastrophic shortfall in funding for fully fledged modernization - the arms race and cold war expenses accounted for a quarter of the Soviet budget. Reducing tension with the West and with the USA in order to reduce the threats of the Cold War became yet another priority of Gorbachev’s Perestroika.

From Strong Enemies to Good Friends 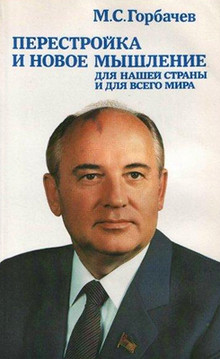 Cover of Mikhail Gorbachev's book "Perestroika: New Thinking for Our Country and the World"

Gorbachev would expound upon his major ideas of new foreign policy in his book entitled “Perestroika and new thinking for our country and the whole world” (Перестройка и новое мышление для нашей страны и для всего мира) which appeared in 1987. Its main message was addressed to the world’s superpowers which, the author claimed, have to unite in the nuclear age in order to protect international peace and stability. In the book, Gorbachev continued saying that all ideological and economic disagreements between the world’s socialist and capitalist systems have to be left behind and forgotten before the common goal - the protection of universal human values.

First of all it applied to the Soviet-American relations.

In 1985 Gorbachev met with the American president Ronald Reagan in . The 40-minute meeting didn’t bring any appreciable result, but it definitely marked the beginning of a new era in relations between the two nations. On January 1st, 1986, the people of the two countries for the first time in history received New Year TV greetings from both an American president and a Soviet leader.

In October 1986, Gorbachev and Reagan met again, in . The meeting would go down in history as the Reykjavik summit. This was where the new Soviet foreign policy was first officially declared.

In the aftermath of the Chernobyl nuclear disaster in April 1986, the Soviets proposed eliminating INF weapons from Europe (INF’s are "Intermediate-Range Nuclear Forces", which are distinct from ICBMs, or intercontinental ballistic missiles). The Russians also proposed the elimination of 50% of all strategic arms, including ICBMs, and agreed not to include British or French weapons in the count. The American side was instead asked to pledge not to implement strategic defenses for the next ten years, in accordance with the SALT I agreement. 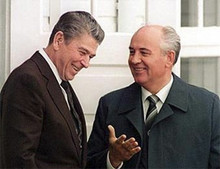 The talks collapsed at the last minute as, according to analysts, the agreement would have required "an exceptional level of trust" that neither side had yet developed.

But what may look like a failure has been considered by many participants, observers, historians and politicians as a considerable breakthrough which eventually made possible the signing of the INF Treaty (Intermediate-Range Nuclear Forces Treaty) in Washington on December 8, 1987.

From Cold War to Warm Peace

Presidents Gorbachev and Bush at Malta Summit, 1989 (Photo from http://www.juggle.com)

One of Perestroika’s major goals was achieved: the climate in the Soviet-US relations was getting warmer and within 3 years confrontation was all over. At the two-day Malta summit, on December 3, 1989 the leaders of the two superpowers, Gorbachev and Bush, declared an end to the Cold War. ”We are at the beginning of a long road to a lasting, peaceful era.” Mikhail Gorbachev said. A year later, in November Paris a so-called “Charter for a New Europe”, also known as Paris Charter was adopted by most European governments, Canada, the USA and the USSR actually proclaiming an end to an almost half a century long resistance and a beginning of a new era - of democracy, peace and unity.

Meanwhile, Gorbachev was often criticized for paying too high a price: the USSR agreed on too many concessions in arms reduction and refused its influence in socialist Europe. Renouncing the Brezhnev Doctrine that gave the Soviet Union the right to intervene militarily in Warsaw Pact countries, communist governments in Eastern Europe were overthrown; the Berlin wall fell, the Soviet troops withdrew.

Results of the economic reforms were disappointing, too. Workers demanded steep wage increases. As the government printed more money, prices were going up. Thus, goods usually distributed through official state stores at fixed prices quickly disappeared as speculators snatched them up to make more profit. By 1988-89, many staples could not be found even in . For the first time since the end of the Second World War, a food ration ticket system returned. Instead of streamlining the system, Gorbachev's decentralization caused a new production crisis. 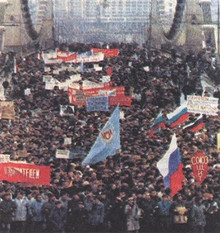 The USSR’s external debt more than tripled. The ruble, the Soviet national currency, devalued dramatically. The country’s gold reserves reduced by 10 times while the +2.3% economic growth in 1985 was replaced by a ­-11% recession in 1991.

Economic decline was worsened by political tensions between forces supporting socialism and parties and movements insisting on capitalist principals. The future of the Soviet Union, of all the republics forming it, their relations and coordination between Russian supporters of a republic and the Soviet Union’s state run public authorities were all still more points of contention. Perestroika sparked numerous national conflicts.

Aimed at bringing the country out of the crisis, Perestroika eventually destroyed the Soviet Union.