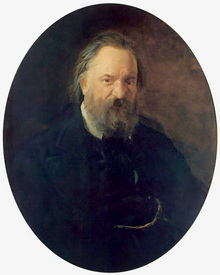 Aleksandr Ivanovich Herzen was a Russian radical writer and philosopher.

He was a prolific and varied writer. His collected works approach forty volumes in their standard Soviet editions and are dominated by his masterpiece, his memoirs “My Past and Thoughts.” Overall, he is probably best characterized as a radical journalist and essayist. Aleksandr Herzen, the son of a Russian nobleman, was the founder of the Free Russian Press, editor of Kolokol (“The Bell”), author of a memoir-in-progress, “My Past and Thoughts” and the first self-proclaimed socialist in Russian history. He was the best-known Russian exile. Orsett House is one of a dozen addresses Herzen occupied in London, where he lived continuously between 1852 and 1864. The American liberal critic Dwight Macdonald called “The Bell” “perhaps the most effective muckraking magazine in radical history.” Isaiah Berlin, Herzen's most distinguished and most committed cheerleader in modern times, called him a writer and thinker of genius.

Herzen developed a socialist philosophy that was the ideological basis for much revolutionary activity in Russia.

Despite shifts in his views over the years, his basic themes remained constant: hatred for the oppressive regime of Tsar Nicholas I, a demand for individual freedom and anger at the injustice suffered by the peasant population in Russia. Herzen drew much early inspiration from Western European “utopian” socialists, and like them, devoted much attention to issues of marriage, family life and the rights of women.

Herzen was born in 1812 in Moscow as it was being evacuated and set on fire in the wake of the incursion of Napoleon’s Grand Armey. Herzen’s father had neglected to remove his family in time, so he had to seek a special audience with Napoleon to get them all out. “Tales of the fire of Moscow, of the Battle of Borodino… of the taking of Paris were my cradle songs, my nursery stories, my Iliad and my Odyssey,” Herzen wrote.

He was the illegitimate son of a wealthy landowner, Ivan Alekseevich Yakovlev, and a middle-class German woman, Louisa Haag (known in Russian as Luiza Ivanova), whom Yakovlev met while in diplomatic service and whom he brought back to Russia on his return. Herzen was 13 when the Decembrist rising took place, and he was present at the thanksgiving service in the Kremlin after the hangings. The scene made a lasting impression on him. His foreign tutors exposed him to radical ideas and in his early teens he dedicated himself to the fight for freedom. In 1829 Herzen entered the University of Moscow to study natural sciences and became the leader of a small group of like-minded students. In fact, there were two circles centered at the Moscow University, the most influential of which was the circle of Nikolay Stankevich. Stankevich's circle flourished in the 1830s and enlisted the loyalties of all of the above men at one time or another before the untimely and premature death of Stankevich in 1840 from tuberculosis. Herzen's circle, to which his close friend Ogaryov belonged, was separate. In other words, in Moscow in the early 1830s, among the young men and women of the educated elite, there were two related but distinct responses to Tsarist absolutism (when there was a response at all), both of them nurtured in the student body of the Moscow University: the “philosophical circle” and the “political circle” amicably decried by each other as “German sentimentalists” and “French frondeurs.” Both circles were small. “The philosophicals” took refuge from unpleasant reality in the “inner liberation” offered by German idealism. Their most famous alumnus turned out to be Bakunin. Meanwhile, “the politicals” studied the French Revolution and the utopian socialists. Their leader was the young Herzen.

They were easy targets for the “Third Section,” a secret security service established by Nikolay I in the aftermath of the Decembrist Revolt. In 1834, when Herzen was 22, he and a few others, including his closest colleague, the poet Nikolay Ogarev, were arrested.

Herzen spent six years in prison and exile. By the time he was deemed to have expiated his sins sufficiently to be allowed abroad, Herzen was 34, married to his first cousin Natalie and, by the death of his father, rich. In January 1847 he left Russia with Natalie, their three children, his mother, a tutor, a nanny and two female dependents “in two carriages, padded against the winter cold with fur.” Their reason for travel was to seek help for one of the children who was deaf from birth. They might have expected to return in six months but, of the family, none saw Russia again. They were heading for Paris, the home of the revolution (“I came to Paris as people used to come to Jerusalem or Rome”). The Herzens were visiting Italy when revolution broke out in Paris in February 1848, but returned in time for Herzen to experience, with growing disgust, the events that were to transform the Second Republic into the Empire of Napoleon III.

Herzen wrote to his Russian friends. “My hand shakes when I pick up a paper, every day there is something unexpected, some peal of thunder.” Herzen’s old friend an anarchist Mikhail Bakunin had already started east to foment revolution against the Tsar. Another friend, the German Romantic poet Georg Herwegh, was raising a battalion of émigré workers and intellectuals to march on Baden-Baden. Herzen stayed in Paris to see what would happen next. The liberal provisional government, challenged by the radical Paris workers, called in the National Guard and unleashed a slaughter. Bakunin was arrested in Dresden, commencing a long journey through the prisons of Europe. And Herwegh’s battalion was routed by the Prussian Army outside Baden-Baden, the poet returning to Paris in disgrace. “Our hero could no more bear the smell of gunpowder,” his rival Heinrich Heine jeered, “than Goethe could that of tobacco.” Within a few months, the revolutionary tide had rolled back all across Europe.

Herzen, heartbroken by the developments, announced that he was turning inward: if society was not ready to be liberated from a crumbling order, individuals could at least save themselves, as he put it, “from the danger of falling ruins.” He and Herwegh began to discuss plans for a two-family commune. The events of 1848 had left the Herweghs without resources, but Herzen had managed to get his assets out of Russia, foiling the Tsar’s attempt to seize them. “Money is independence and power, it is a weapon,” he explained. “And no one throws away a weapon in time of war, even if it comes from the enemy and is a little rusty.” He found the two families a house in Nice, and together they moved there in the middle of 1850. Herzen was unaware that six months earlier his beloved wife, Natalie, had begun a serious affair with Herwegh.

On the day that Herzen finally learned about the relation, he found himself standing with Herwegh on a sheer rock cliff overlooking the sea at Nice. He was out of his mind with rage. “Why didn’t I immediately start a conversation or push him off the bluff into the sea?” he later wondered. He’d been betrayed by Herwegh, but Herzen believed that dueling was barbaric. It was the last they saw of each other.
In late 1851, at the height of the scandal, Herzen’s mother and his young son Kolya drowned at sea. Natalie fell ill, a situation that was compounded by another pregnancy. In the spring of 1852, she and the child died. 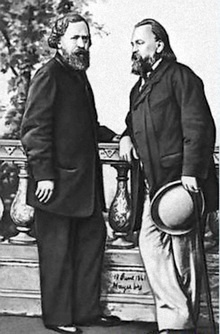 “I feel all the faintheartedness of my behavior,” he wrote to a friend, “but everything is so terribly broken inside.” Herzen moved to London and began to write his bitter tale.

The result, “My Past and Thoughts,” is one of the most remarkable books in the Russian canon. In 1852, he was forty years old, a sharp-tongued aristocrat, a fervent revolutionary and a writer of genius. He had refused the Tsar’s order to return to Russia and so had also become an exile. “I have lived too long as a free man,” he explained, “to allow myself to be chained again.” This last fact was especially notable because, more than anyone of his generation, Herzen identified himself with Russia. From the very first sentence of his memoirs, he was able to connect his life with the great currents of the preceding half-century.

Herzen had one advantage over the rest of the exiles - he had got his money out of Russia (with the help of a Rothschild). When he started “The Free Russian Press” as a way of re-engaging with the struggle, it was the saving of his middle years. After the death of Tsar Nikolay, Ogarev and his wife, another Natalie, joined him in London and soon their journal, “The Bell,” was on course for the emancipation party at Orsett House.

“The Bell” was at its peak. It wasn't much to look at, but its circulation was astounding for a magazine that had to be smuggled to its readers - it had a print run of 2,500 and some editions had to be reprinted. It had been going for nearly four years, during which time it pleased almost every section of literate Russian society, even in the Winter Palace, where the tsar was said to read it.

But, on the night of the party at Orsett House, when the news arrived from Poland, the edifice of Herzen's reputation invisibly and inaudibly cracked. The article he wrote about the Polish massacre (titled “Mater Dolorosa”) was his first open attack on Alexander II in person, and “The Bell's” constituency began to fracture. “The Bell” was no longer at the centre of gravity. Circulation dropped. When Herzen and Ogarev and their dependents left England four years later, it was partly in an attempt to save their magazine by moving it to Geneva, which was filling up with Russian exiles as Alexander's regime grew tougher, and by printing a French edition. It didn't work. “The Bell” tolled for the last time in 1868. By then Herzen was not just marginalized, but openly derided by the “nihilist" generation, and on 14 January 1870, eight years and nine months after the party in Westbourne Terrace, he died while on a visit to Paris.

Herzen invented Russian populism in reaction to the failure of Western socialist democracy in the European revolutions of 1848. By the end of the 1870s, Herzen was being re-read and received a casual endorsement from Lenin. In the course of time, that made him a sacred figure in Soviet Russia. In Moscow, a boulevard was named after him.