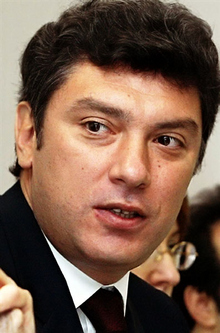 Boris Nemtsov began his career as a scientist, but his successful opposition to the building of a new nuclear plant shortly after the Chernobyl disaster brought him into politics. He was First Deputy Prime Minister of Russia under President Boris Yeltsin in the 1990s and, following Yeltsin’s replacement by Vladimir Putin, has been a prominent opposition leader in Russia. He is one of the leaders of Solidarity, a political opposition movement.

Boris Efimovich Nemtsov was born in the southern Russian resort city of Sochi on October 9, 1959. In his own biography, Nemtsov claims that despite leaving Sochi at age seven, it remains his favorite city. He stood for Mayor of Sochi in 2008.

The young curly-haired Boris moved to the city of Nizhny Novgorod, Russia’s fourth largest city, and enrolled in school there. The city was then called Gorky, and it was one of the Soviet Union’s closed cities, which required special permission to visit and was off-limits to foreigners.

He studied physics at Gorky State University, where his uncle worked as a professor, and graduated with First Class Honors. After graduation he researched in the fields of plasmas and hydrodynamics and was awarded the USSR equivalent of a Ph.D. in 1985.

Nemtsov’s mother, a pediatrician, led a protest movement against the building of a nuclear power plant in Gorky in 1988. Boris played an active part in the movement, which ultimately dissuaded the Soviet authorities from building in the city.

In 1989 Nemtsov unsuccessfully ran for the Soviet Congress of People’s Deputies. He campaigned for private property rights and free speech while criticizing the Soviet one-party system and censorship. He failed to obtain the approval of the selection committee, which was required to put his name on the ballot paper.

A year later, he was elected to represent the Gorky Region in the Supreme Soviet, then the highest legislative body in Russia. In this post, he was noticed by the future president, Boris Yeltsin, who was also in the Supreme Soviet. When Yeltsin was elected president in the country’s first presidential election in 1991, Nemtsov was appointed his official envoy to Nizhny Novgorod (Gorky) Region.

During the August 1991 coup attempt by hard-line communists, Nemtsov was in Moscow and lent his support to President Yeltsin. He took part in the dramatic defense of the White House, which then housed the Supreme Soviet and Congress of People’s Deputies. During the defense of the White House, Yeltsin climbed onto a tank and addressed the crowd – his televised speech secured his popularity among Russians. In the end, the massed armed forces did not attack the White House building, although there were some casualties from small skirmishes. 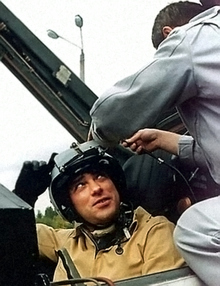 Later in 1991, as a reward for his support of Yeltsin during the coup, Nemtsov was appointed Governor of Nizhny Novgorod Region – he was the first to hold this newly created position. Yeltsin later admitted that Nemtsov was the only Nizhny Novgorod resident with whom he was personally acquainted.

Boris Nemtsov was determined to make Nizhny Novgorod a model of free-market capitalism – so determined that some academic figures criticized his leadership style as “authoritarian.” An ambitious construction plan was implemented, which among other projects involved the building of a regional airport. British Prime Minister Margaret Thatcher landed at the airport soon after it was built. She praised Nemtsov’s sweeping reforms of the city, which was once closed to foreigners. Thatcher’s successor, John Major, and French Prime Minister Alain Juppé later visited the city, which was labeled a “laboratory of reform” by academics and the media.

The city administration of Nizhny Novgorod during Nemtsov’s tenure as governor was notably friendly to journalists and was referred to in the media as the “land of fearless journalists.”

In 1993, and again in 1996, Nemtsov was elected Senator to the Federation Council, the upper house of the Russian Parliament, representing Nizhny Novgorod Region.

Nemtsov was appointed Deputy Prime Minster of the Russian Federation in 1997. His responsibilities included social issues, housing and control of industrial monopolies. In parallel, Nemtsov served as Minister for Fuel and Energy. In 1998, following a government re-shuffle, Nemtsov took responsibility for financial and economic issues.

Unfortunately for Nemtsov this new appointment coincided with a crippling economic crisis in Russia beginning in August 1998. The Kirienko-led government was dissolved, and Nemtsov left office with it.

Along with former Prime Minister Sergey Kirienko and other leading economic reformists, including Anatoly Chubais and Yegor Gaidar, Nemtsov founded the liberal market-orientated political party Union of Right Forces (SPS). Nemtsov was elected as a Duma (Parliament) deputy under the new party list in 2000, when the party polled 8.6% nationwide. He became party leader in 2001 following Kirienko’s resignation from this role.

SPS faced competition in the liberal arena from parties such as Yabloko, which diluted support. Yabloko and SPS discussed merging, but negotiations fell through, and neither party succeeded in passing the entry barrier of 5% of national votes during the 2003 parliamentary elections. Allegations of electoral fraud were widespread, but Nemtsov accepted responsibility for the defeat and resigned as party leader in 2004.

In what Nemtsov has described as a complete break from his political career, he became a director of Neftyanoy Bank in 2004. He claimed publicly that he wished to “forget about politics, and simply earn money” for a while. Nemtsov, however, left the company after less than a year, when allegations of fraud began to surface.

During the contested 2004 presidential elections in Ukraine, dubbed the Orange Revolution by the media, Nemtsov publicly supported the pro-Western candidate Viktor Yushchenko, who was elected in a repeat vote. Nemtsov served as an economic advisor to the new president for some time after his election. 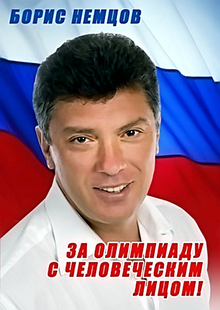 In 2007 Nemtsov launched his candidacy for President of Russia, and was supported by the Union of Right Forces. He later dropped out of the race, claiming that the elections would be fixed, and that “the presidential elections, like the parliamentary ones, will be a farce, because candidates do not have equal opportunities to campaign.” He called on other opposition candidates to follow his example in order to deprive the government parties of legitimacy. The other leading liberal candidate, Mikhail Kasyanov, was later prevented from participating by the Central Election Commission because some of the signatures he collected were “invalid.”

Following the 2008 vote, which resulted in the election of Dmitry Medvedev as the successor of President Vladimir Putin, Nemtsov and other opposition politicians called the result “illegitimate.” Nemtsov also criticized the opposition for failing to unite behind a single plausible platform, and subsequently resigned from his committee position in the Union of Right Forces (SPS), which polled extremely poorly in the 2007 parliamentary elections. In 2008 SPS members voted to dissolve the party.

After the collapse of SPS, Nemtsov, along with many of the party’s former leaders and former chess champion Garry Kasparov, gave his backing to the newly formed Solidarity movement. The name of the movement is a nod to the Solidarity movements in Poland and other Eastern Bloc countries that campaigned for reforms of the Soviet system in the 1980s and 1990s. Nemtsov announced that the movement’s aim was “not the destruction, but the dismantling of the [current] regime.”

Sochi, the city where Nemtsov was born, became a political flashpoint in 2009 during the mayoral elections. The new mayor would have considerable authority and spending power, as Sochi was to be the host of the 2014 Winter Olympic Games and the focus of colossal federal spending to develop its infrastructure and sports facilities. Nemtsov decided to run for mayor of his hometown. He was confident about his chances of success “if the elections will be open, without fraud or intimidation.” His main Kremlin-backed opponent, Anatoly Pakhomov won the election with 77% of votes, while Nemtsov received 13%. Nemtsov disputed the results, calling the election “fixed.”

Boris Nemtsov has been arrested several times for taking part in unauthorized protests against then-president Vladimir Putin and government restrictions on public protests. His imprisonment in December 2010 sparked international condemnation and Amnesty International described him as a prisoner of conscience.

In December 2011 Boris Nemtsov took part in mass rallies in Moscow against alleged violations committed by the authorities overseeing the December 4 parliamentary poll, and was once again detained.

Nemtsov was awarded an Order of Merit for the Motherland for his work as Deputy Prime Minister of Russia. He is married, but has always kept his family out of the political spotlight and details about his personal life are rarely reported in the media.