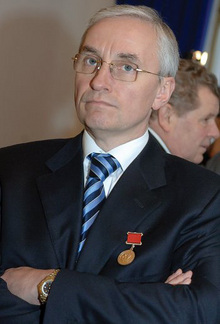 Chairman of the Institute for Contemporary Development (ICD) and a member of Russia’s Public Chamber, Igor Yurgens is one of Russia’s most influential experts close to President Dmitry Medvedev. He is remarkably skilled at combining public, business and political careers: at the same time Yurgens is a member of the administrative office of the Russian Union of Manufacturers and Entrepreneurs, Vice-President of Renaissance Capital Group, Chairman of the Committee on Finances at the Russian Chamber of Commerce and Industry, Head of the Baltic Forum, member of the Higher Council of the Just Cause Party among other ranks and positions.

Igor Yurgens was born on 6 November 1952, in Moscow. Little is known about his childhood. His father, Yury Teodorovich Yurgens (1912-1970) was a journalist, general director of the Trud newspaper publishing house and the secretary of the Azerbaijan committee of oil workers trade union, who took part in the Second World War as a submariner. His mother, Yurgens Lyudmila Yakovlevna, (born 1925) was a piano teacher.

In 1974 Igor Yurgens graduated from the Economic Faculty of the Moscow State University as a self-described “certified Marxist.” Later though he “overcame” his Marxist views, obtained a Ph.D. in Economics (1999) and became a professor at the liberal Higher School of Economics in Moscow.

From the very beginning of his career Igor Yurgens operated within both government and business structures. He worked at the All-Union Central Council of Trade Unions for six years (1974–1980) before serving a five-year term in the UNESCO Sector for External Relations and Cooperation based in Paris. Knowledge of foreign languages was necessary for the post and now Igor Yurgens speaks English and French fluently. After returning to the USSR in 1986 he continued his career in the trade unions (first in the Soviet All-Union Central Council and then, from 1991 to 1997, in the CIS General Confederation of Trade Unions).

Another sphere of Igor Yurgens’ professional interests is finance and investment. In 1996 he became the Chairman of the international insurance company Mesco and two years later headed the All-Russia Insurers Union, keeping that post until 2002. Insurance was his area of expertise. The “organization and regulation of insurance activity in the Russian Federation” was the theme of his Ph.D. In 2000 he headed the Committee on Insurance of the Russian Chamber of Commerce. In 2002, he became Chairman of another committee at the Chamber - the Committee on Finance and later that same year he received the “Man of the Year 2002” national award for “strengthening international and interregional political and economic ties.”

In 2001 Igor Yurgens entered the leadership of another important professional association – the Russian Union of Industrialists and Entrepreneurs – becoming its vice-president. Since then he has become known as “the spokesperson of Russian tycoons.” In 2003 Igor Yurgens criticized the government’s attack on Yukos and accused of the Russian authorities of “populism.” That same year he was among those who signed a public letter to President Vladimir Putin pointing out arbitrary behavior on the part of the tax authorities towards Yukos.

In 2005 Igor Yurgens became the first vice-president of a major investment company, Renaissance Capital, where he effectively manages government relations. He is also on the Supervisory boards of Russian branches of Nestle, Hewlett-Packard and British Petroleum. 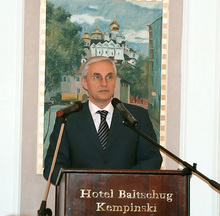 Igor Yurgens’ career growth was complemented by activities in political and public spheres. In 1992 he became a member and in 1996 a panel member of the Council for Foreign and Defense Policy – an influential Russian political expert community. Since 1997 he has also occupied a number of other positions: Co-chair of the Board of Trustees of the Parliamentary Development Foundation, member of the expert council of the Committee on Credit Organizations and Financial Markets of the Russian State Duma, Chairman of the Baltic Forum NGO. In 2000 Igor Yurgens became Chairman of the Moscow Creditors’ Club and a member of the board of directors of the Russian National Association of Securities Market Participants (NAUFOR). He is also a member of the SIGMA group, which unites Russian experts working on problems of modernization and the head of the Moscow State University economic faculty graduates’ club. Finally, in 2008 Igor Yurgens became one of the co-founders of the Just Cause Party (registered in February 2009), entering its Higher Council along with General Director of Nanotechnology Corporation Anatoly Chubais, founder of Wimm-Bill-Dann Company David Yacobashvili and others.

Nowadays Igor Yurgens is known as a “Kremlin liberal,” opposing Vladimir Putin’s anti-crisis plan based on state intervention. He calls for the modernization of the Russian economy and political system, blaming centralization, protectionism and state interference in the economy (including the much discussed “state corporation” instrument) for Russia’s weakness in a time of crisis. Igor Yurgens urges the government to come up with liberal initiatives and put an end to the country’s one-sided dependence on oil and gas exports.

Many political experts put Yurgens very close to Russia’s president Dmitry Medvedev. In the first days of Medvedev’s office Igor Yurgens was labeled his spokesperson. His words on the struggle President Medvedev is allegedly leading against the “conservatives” in the Russian elite became a sensation in 2008 as it suggested an opposition to the previous president. In May 2009 Igor Yurgens bitterly criticized Vladimir Putin’s presidency in an interview with The Daily Telegraph. He said Putin had put power in the hands of a small ruling elite, creating an energy-dependent model that was beginning to creak as the financial crisis began to weaken Russia “The present system shows signs of overextension. It shows signs of over centralization and fragility because it is based not on institutions but on the mythological vertical of power,” he commented.

Igor Yurgens’ public statements frequently arouse the discontent of Russian “siloviki” which allegedly was the reason for recent cuts in state financing of the ICD, now called “Medvedev’s unofficial think-tank.” But Dmitry Medvedev never alienated himself from Igor Yurgens; it was the president who proposed the creation of the ICD on the base of the Institute for Information Society and headed its Supervisory Board. It was also on the President’s initiative that Igor Yurgens became a member of the Public Chamber (since 2008) and of the President’s council on promoting the development of civil society institutions and human rights (since 2009).

Igor Yurgens is married. His wife Irina Yuryevna Guk (born 1951) is a teacher at the American University in Moscow. Their daughter Ekaterina (born in 1977) is the top manager of the international PR company “Blue Sky”.

Leonid Nevzlin A Russian businessmen and billionaire currently living in Israel, Leonid Nevzlin is the former vice-president of the Yukos oil company.