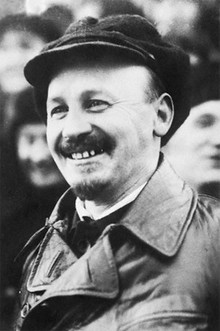 Nikolay Bukharin was one of the key Soviet politicians in the years immediately following the 1917 Bolshevik Revolution. He was a theoretician of the Communist movement during the revolutionary period and throughout the 1920s. Bukharin fiercely fought for the “bright future of the workers” and would not be deterred – not even by the threat of imprisonment and execution.

Nikolay Igorevich Bukharin was born on October 9, 1888 into the family of a schoolteacher. At the age of five Nikolay went to Chishinau (now the capital of Moldova) where his father was sent to supervise the opening of new educational institutions. He was a good student and when the time came, he successfully entered the Law Department of the Moscow State University.

His entrance into the university coincided with the nationwide workers’ revolt against the Tsar that went down in history as the Russian Revolution of 1905. The spirit of liberation changed the life of many Moscow students. Bukharin and his friend Ilya Ehrenburg, who later became a famous Soviet writer, took part in many student demonstrations. In 1906 Nikolay joined the Bolshevik movement, the Leninist faction of the Russian Social Democratic Workers' Party.

At the age of 19, in 1907, he organized a nationwide youth conference, which many historians have called an early version of the Komsomol – the Youth Communist League that existed in the USSR from 1918 to 1991. In the years that followed Bukharin worked for his party as a successful propaganda officer and organizer. He became a member of the City Party Committee in Moscow. Nikolay was responsible for working with the trade unions that were gaining strength across the country. It was also at this time that he met his first wife Nadezhda Lukina.

But by the end of Bukharin’s studies the dean of the university decided that they’d had enough of the young revolutionary’s activity. In June 1911 he was arrested and exiled to the Archangelsk region on the Arctic coast of Russia. He soon managed to escape, however, and later that same year emigrated to Germany. He remained abroad – first in Europe and then in the United States.

A theory of the working-class happiness

Outside Russia Bukharin began to establish himself as a major theorist, writing research based on his university observations. His works included “Political Economy of the Leisure Class,” published in 1913 and the comparative study “World Economy and Imperialism.” He also wrote “Marxism and the National Issues” for which Joseph Stalin helped him translate some of the articles from German into Russian. By that time Bukharin had managed to get on friendly terms with Vladimir Lenin, the founder of the Bolshevik movement. But the two had a major theoretic row – Bukharin was sure that their revolutionary ideas could be easily applied in Europe while Lenin, who wanted the workers to seize power all over the world, thought that Bukharin’s idea of a “Socialist United States of Europe” was premature.

During his time abroad the police in many countries tried to trace Bukharin’s activities at the request of the Russian authorities. In constant fear of arrest, he moved from one European capital to another. Over a two-year period he lived in Vienna, London, Stockholm and Copenhagen before ending up in New York in 1916. With his “friends in revolution,” Leon Trotsky and Aleksandra Kollontai, he published the New World magazine.

A plunge into Revolution

In 1917, after the February Revolution toppled the Tsar, Nikolay Bukharin returned to Russia. It took him three months to get back to Moscow via Japan. First, he was detained by the Japanese authorities on terrorism charges. Then he was arrested in the Russian port of Vladivostok for his propaganda activities among workers and sailors. Upon his arrival in Moscow he took an active part in the work of the Moscow Soviet – the Council of Workers and Soldiers. At that time he also began editing a Bolshevik magazine called Spartacus, named after the leader of the Ancient Roman slave revolt who was a very popular figure in Soviet Russia. Bukharin worked closely with Mikhail Frunze, the future head of the Soviet Armed Forces.

Right after the success of the October Revolution Bukharin became the chairman of the “Left Communist Group.” But he disagreed with Lenin over economic and revolutionary issues. When Lenin proposed to end World War I for Russia by a separate peace treaty with Germany, Bukharin, Leon Trotsky, Feliks Dzerzhinsky and others argued strongly for changing the world war into a fight for a pan-European revolution. However, Bukharin's views gradually began to change.

Following the Civil War that broke out after the Bolshevik Revolution and destroyed the country’s infrastructure, Bukarin became an active supporter of Lenin's proposal to consolidate the victories of the Party inside Russia by means of the so-called New Economic Policy, or NEP. At that time Bukharin held numerous high Party and governmental posts and was the editor of several mass media outlets, like the Pravda newspaper (1918-1929) and the Bolshevik magazine (1924-1929). He also initiated the publication of the Great Soviet Encyclopedia. At the same time he continued his work in Marxist-Leninist political theory. One of his most prominent books was the “Theory of Historical Materialism,” published in 1921. In 1924 he became a member of the Communist Party Politburo.

After the death of Vladimir Lenin in 1924, the struggle for power became harsh. When Joseph Stalin became General Secretary of the Communist Party, Bukharin had to review his political stance as well as reevaluate all those who had made the revolution possible alongside him. Bukharin was now seen as the leader of the rightwing of the Party. He rejected the idea of a world revolution and argued that the Party's main priority should be to defend the communist system that had been developed in the Soviet Union.

Bukharin's economic policies also became more conservative. He argued that socialism in the Soviet Union could evolve only through a long period of reforms. Bukharin's theory concerning agriculture was also ambiguous. He was sure that small farmers only produced enough food to feed themselves and suggested developing various mechanisms to motivate rich peasants.

Joseph Stalin claimed to be an active supporter of the “new” Bukharin. But it was only part of his intricate scheme to remove those who had fallen into his disfavor – Lev Kamenev, Grigory Zinoviev and Leon Trotsky. Stalin accused them of creating disunity and havoc in the Party. Later, Bukharin understood it was nothing but a ploy by Stalin to spark a head-on fight between the political groups, letting them eventually destroy each other and leaving Stalin the sole leader. This prompted Bukharin to declare: “He [Stalin] is an unprincipled intriguer who subordinates everything to his appetite for power. At any given moment he will change his theories in order to get rid of someone.”

Soon afterwards Bukharin himself fell victim to Stalin's tactics. In 1929 he was condemned as a leader of the so-called “Right Deviation” faction. According to Stalin, this group “was harmful to the construction of socialism.” Bukharin was removed from his high positions. He continued to hold some minor posts in the Ministry for the Heavy Machinery and remained the publisher of a magazine on technical modernization.

In 1934 Bukharin publicly accepted defeat. In his speech at the Party Congress he said: “The members of the Communist Party ought to stand together to make the ideals of Comrade Stalin come true.” After that he was elected a candidate member of the Central Party Committee, meaning he had no right to vote on major issues.

In 1935 Bukharin was put in charge of the “quest” to transport the original works of the founding fathers of communism, Karl Marx and Friedrich Engels, from European libraries to the Soviet Union. They had been taken out of Germany after the Nazis came to power in 1933. After the mission was successfully completed, Stalin asked Bukharin to supervise the writing of the text for the new Soviet Constitution. According to many experts, the result was one of the most democratic constitutions in the world. It became known in the USSR as “Stalinist” – though all the parts were written by Bukharin. Ironically, it was Stalin who violated all the basic rights of the people with the introduction of his purges in the middle of the 1930s.

Bukharin was not the first to be “hit.” In 1936 trials were organized against Kamenev, Zinoviev and their so-called “collaborators.” During one of the trials prosecutors forced them to confess that Bukharin had plotted to overthrow of the government. It was a shock for Bukharin. In a letter to the Soviet military commander, Kliment Voroshilov, he denounced his former “comrades in revolution.” About Kamenev he wrote: “I feel no remorse that this dog was executed. I feel glad about it.” The charges against Bukharin were dropped – but only for a while. 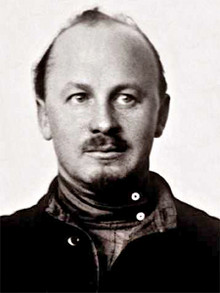 In January 1937 Bukharin was again accused of treason. As soon as he found out about the allegations he went on a hunger strike. But he capitulated after a conversation with Stalin in which the Soviet leader said, “How dare you send an ultimatum. Who are you to challenge the Central Committee?” Bukharin immediately realized that he was doomed. In prison he tried to keep his spirits up by writing historical research on the roots of fascism, while continuing to profess his innocence. During his final trial he said: “The horror of my crimes knows no limits.” On March 13, 1938 the USSR Supreme Court sentenced Bukharin to death. Two days later he was shot by firing squad in the village of Kommunarka in the Moscow region.

The fate of all the women in Bukharin’s life was also tragic. His first wife, Nadezhda, was arrested in 1938 and later died in the Gulag. His second spouse, Nadezhda Gurvich, gave birth to a daughter, Svetlana, in 1923. In 1929 she was forced to leave Bukharin as a part of the plot against him. But this was not enough to save her and her daughter from the Gulag. In 1934 Bukharin married his third wife, Anna Larina, the daughter of a top Communist Party official. She was also imprisoned. But before her arrest she had managed to send their son to an orphanage under the name of Yury Gusman. After Stalin’s death the boy lived under the name Yury Larin. Anna and Yury survived Stalin’s camps and lived to witness the posthumous rehabilitation of their husband and father on February 4, 1988 by decree of the Soviet leader Mikhail Gorbachev.