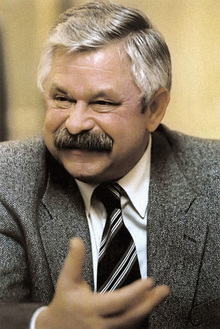 A Russian politician, former Soviet military officer and Vice-President of Russia in 1991-1993.

Aleksandr Rutskoy was born in Khmelnitsky in Ukraine, into a family with rich military traditions: his father was in the tank forces and his grandfather served in the railway troops. Aleksandr finished secondary school in 1964, and after that worked in an aircraft factory as an aeromechanic and a fitter. In 1971 he graduated from the Barnaul Air Force Academy and in 1980 from the Gagarin Air Force Academy.

Rutskoy played a direct role in the Soviet-Afghan War, a nine-year conflict involving Soviet Union forces supporting the ruling Marxist People’s Democratic Party of Afghanistan against the Mujahideen resistance. Aleksandr Rutskoy held the rank of colonel and was in command of an air assault regiment. He performed combat flights and was shot down twice. The first time, in 1986, he was seriously wounded and damaged his spine, but two years later returned to the war. The second time, in 1988, he was taken captive by Afghan Mujahideens, but was soon released with the help of Soviet diplomatic representatives.

In 1990 Rutskoy graduated from the Military Academy of the General Staff of Armed Forces of the USSR with the scientific degree of Candidate of Military Science (the equivalent of a Doctor of Philosophy).

In 1988 Aleksandr Rutskoy’s military life gave way to political activity. He started as the Vice-Chairman of the Moscow Society of Russian Culture “Otechestvo” (“Fatherland”) and then in 1990 was elected as a member of parliament of the Russian Soviet Federative Socialistic Republic (RSFSR).

Aleksandr Rutskoy was a key figure of the historical period from 1990 to 1991, the time of the collapse of the Soviet Union. In the late 1980s, the constituent republics of the Soviet Union started legal moves towards the declaration of their independence. On 12 June 1990, Russia’s sovereignty over its territory was declared. Boris Yeltsin became the first President of the Russian Federation, and on that same day Aleksandr Rutskoy was elected Vice-President. It is noteworthy that during this particular period the USSR still existed, with its President, Mikhail Gorbachev.

The period of legal uncertainty continued throughout 1991, as constituent republics slowly became de facto independents. There was only one significant attempt of reviving the Soviet Union, known as the August Coup (19-21 August 1991), when a group of hard-liners of the Communist Party ordered a return to the old system of government, holding Gorbachev prisoner in his Crimea villa and bringing tanks and troops into Moscow to enforce their orders. The coup failed after the army refused to attack the reformers, led by Boris Yeltsin and other political leaders. One of these leaders was Aleksandr Rutskoy.

The end of the USSR was officially proclaimed in December 1991, with establishment of the Commonwealth of Independent States. That period was characterized by incredibly rapid change in the political sphere, with the existence of the formerly leading Communist Party and newly-created young parties and movements. In spring 1990 Aleksandr Rutskoy became a member of the Central Committee of the Communist Party of the Soviet Union, but within a year he announced the formation of the Democratic Party of the Communists of Russia, which was later renamed the People’s Party - Free Russia.

Aleksandr Rutskoy held the post of Vice-President from June 1991 until October 1993. During this time he administrated the agricultural sphere of the country and headed the Crime and Corruption Commission of the Security Council of Russia. Rutskoy took an active part in the question of the independence of Transnistria (also known as Trans-Dniester) from Moldova, and Crimea from Ukraine. 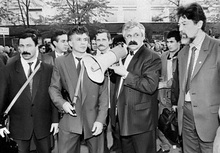 Despite originally having a good relationship as Vice-President with President Yeltsin, from the end of 1992 Rutskoy formed opposing views about the President’s policies. The Constitutional Crisis in Russia in 1992-1993 separated the two leaders completely. The crisis was a political confrontation between the Russian President and the Russian Parliament, with a climactic moment in September 1993 when Boris Yeltsin temporarily dismissed Aleksandr Rutskoy from his vice-presidential duties. A few weeks later Yeltsin dissolved the supreme governing body, the Congress of People’s Deputy, and its Supreme Council, even though according to the current constitution a president didn’t have the right to undertake such actions. Rutskoy considered the unconstitutional decrees of Yeltsin as a lawful opportunity to take over presidential duties, and on the night of 21 September Rutskoy, supported by the parliament, proclaimed himself acting President. The crisis reached its climax at the beginning of October, with an armed bloody conflict in the center of Moscow near the television centre Ostankino, between demonstrators, led by Rutskoy and his allies, and troops that supported Yeltsin. According to official reports, the ten-day conflict resulted in 187 people being killed and 437 wounded. Aleksandr Rutskoy and other leaders of the resistance were arrested and charged with the organization of a mass disturbance. Yeltsin dismissed Rutskoy as Vice-President and fired him from the military forces. The post of Vice-President was fully liquidated. The imprisoned politician was granted amnesty in February 1994, even though he was never officially tried by a court.

After the Constitutional Crisis, from 1995 to 1996, the political life of Aleksandr Rutskoy was mainly concentrated on the Social-Patriotic Movement “Derzhava” (“Strong Country”), which he founded. In December 1996 Rutskoy ran for president, but withdrew his candidacy and asked his supporters to vote for Gennady Zyuganov. That same year he became a co-chairman of Peoples Patriotic Union of Russia, and received the scientific degree of Candidate of Science in Economics.

In October 1996 Aleksandr Rutskoy was elected as Governor of Kursk Region, and held this post until 2000. His attempt to run for a second round was not successful: his candidacy was disallowed, due to incorrect data provided about his personal property and irregularities concerning the submission of documents listing supporting voters in his constituency.

Aleksandr Rutskoy is married and has three sons.