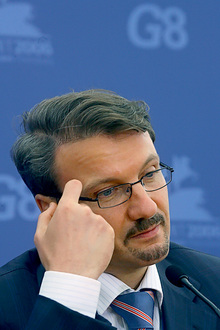 German Gref is the Chairman of Sberbank, Russia’s largest bank, which is majority-owned by the Russian Central Bank. Gref served for seven years, from 2000 to 2007, as the Minister for Trade and Economic Development of the Russian Federation in the administrations of Prime Ministers Mikhail Kasyanov and Mikhail Fradkov.

German Gref was born on 8 February 1964 in a village in Kazakhstan, which was then part of the Soviet Union. His family is of German descent and was moved to Kazakhstan from the Donetsk Basin area of Ukraine in 1941 during the German invasion. The odd spelling of his name in English is a result of it being transliterated twice: once from German to Russian (originally: Herrmann Gräf), and then from Russian to English, losing the German pronunciation along the way. The Gref family, according to some sources, spoke both German and Russian at home and Gref now speaks and reads German fluently.

Gref completed his compulsory military service in a Special Forces unit of the Ministry of Internal Affairs, serving for two years from 1982 to 1984. He was stationed in the Samara Region where he reportedly trained as a sniper.

After military service, Gref continued his education in Russia. He studied law at the Omsk State University and was active in student political life as a Komsomol (Communist Youth) member. Gref graduated with a degree in jurisprudence and then completed the Soviet equivalent of a post-graduate research diploma at St. Petersburg State University. His dissertation supervisor was apparently Anatoly Sobchak, then Mayor of St. Petersburg and a trained lawyer. 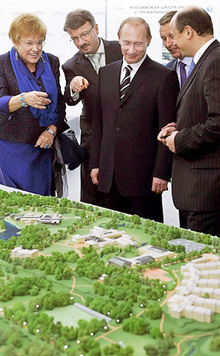 In Kazakhstan, Gref worked for a short time in the legal department of a local government administration before beginning his third-level studies. In St. Petersburg he continued along this career path. In 1991 he began working as a legal consultant to the Economic Development and Property Committee of Peterhoff. Peterhoff is a town near St. Petersburg and one of the cultural gems of Russia – it is dotted with palaces and aristocratic residences built during the time of Emperor Peter the Great, the founder of St. Petersburg. A principal concern at the time was to increase tourism to the area and maintain the historic buildings while the country suffered from the immediate economic effects of the collapse of the USSR.

For the next few years, Gref held several different posts in the Peterhoff administration and was heavily involved in property management and planning. In 1997 he took the role of Vice Governor and Chairman of the St. Petersburg Committee of State Property Management, replacing Mikhail Manevich, who had been assassinated.

Manevich’s murder had been linked to the privatization of state property. Gref himself had to step lightly in 1990s St. Petersburg, where the mafia as well as private interests brutally vied for the control of government assets. Gref clashed with real estate agents and property developers. Bookshop owners were particularly vocal in their opposition to privatizations and re-organization of state property - the fate of many former state-run bookstores in key central locations was a controversial issue at the time, as the new owners of well-placed stores stood to make colossal profits by turning them into cafes and retail outlets.

A particularly controversial project was the redevelopment of Strelna, a suburb of St. Petersburg. Former USSR citizens of German descent were invited to move to the town and German companies such as Bosch and Siemens were encouraged to increase their presence in the area. Gref became the target of much media attention because of his project to create a “German colony,” as some sources dubbed it. 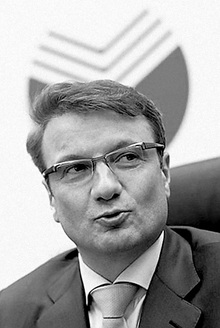 In 1998 Gref became the First Deputy of the Ministry for State Property. He simultaneously served on several state committees as well as on the board of directors of companies such as LenEnergo. In 2000 the new Russian Prime Minister Mikhail Kasyanov appointed Gref as the Minister for Economic Development. During Gref’s seven-year tenure, the Ministry grew to include the Ministry of Trade and took on other government functions such as territory control, exports and tourism development.

The Minister played an active role in promoting Russia as the host of the 2014 Winter Olympics and Paralympics, to be held in the Southern coastal resort of Sochi. For this achievement - a major priority of the Putin administration - Gref was awarded the Order of Merit for the Fatherland.

As Minister, Gref sparred with his government colleagues on matters of administrative restructuring and development – the public quarrels at conferences and meetings were uncharacteristic of Russian ministerial politics. Gref was called a reformer by the Russian business media and praised for taking unpopular choices. Together with the Minister for Finance Aleksey Kudrin, Gref created the Stabilization Fund. The Fund’s primary goal was to facilitate the paying off of Russia’s foreign debt and when it quickly accomplished this goal, thanks to high oil prices, it became a buffer against oil price fluctuations and inflationary pressures. By the time Gref left the

Ministry, the Fund had grown to over $130 billion US dollars. 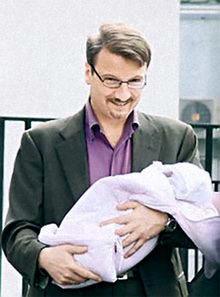 On several occasions German Gref has named “corruption” as the biggest obstacle to Russia’s economic development. One newspaper reported that his stance on corruption, even at the lowest levels, is so strict that his secretary has been instructed to refuse boxes of chocolates in the office on holidays.

Gref was a leading proponent of Russian membership of the World Trade Organization, a goal that was dropped by his successor. Gref left the Ministry when Prime Minister Fradkov was replaced by Viktor Zubkov in 2007. In November 2007 he was voted in as the new Chairman of Sberbank, Russia’s largest bank, which is majority state-owned. As Chairman during the economic downturn, Gref has been notably confident about the Russian property market and has made optimistic predictions on the recovery of real estate prices.

German Gref is married to Yana, a designer. The couple has a daughter and Gref has a son from a previous marriage.

Leonid Nevzlin A Russian businessmen and billionaire currently living in Israel, Leonid Nevzlin is the former vice-president of the Yukos oil company.