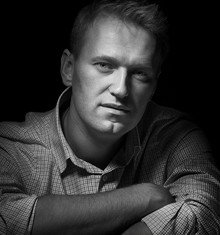 A blogger and opposition activist, a lawyer and a nationalist, a businessman, husband, father and surely one of the most controversial public figures in Russia. Some people want to see him become president, some want to see him behind bars – the man can influence thousands with the click of a mouse - meet Aleksey Navalny.

Aleksey Navalny was born in 1976 in a small closed Soviet military town near Moscow. After graduating from high school he studied law at the People’s Friendship University of Russia in the capital. Navalny continued his education later by studying finance and loans at the Financial Academy with the Government of the Russian Federation, which he completed in 2001.

Nine years later he gathered enough recommendation letters, including one from chess guru and opposition activist Garry Kasparov, and completed a half-year World Fellow course at Yale University in the US. This particular part of his biography still raises many questions and controversial theories among his critics in Russia’s political circle, many of whom accuse Navalny of being a secret agent of the US State Department, trained to destabilize the political climate in Russia.

In 2000, Aleksey Navalny commenced his political career by becoming a member of the Yabloko democratic party. He quickly managed to climb the career ladder, and by 2004 Navalny was already head of the party’s Moscow department. At about the same time he founded the Muscovite Protection Committee – a public movement against corruption and civil rights violations during construction in Moscow.

In 2005, Navalny along with other activists formed another movement called Da! (Yes!)  - a non-party-affiliated youth organization designed to tackle problems with Russia’s social and political life. In 2007, he even hosted a political debate show called Fight Club on a Moscow TV channel and at about the same time became one of the founders of the nationalist-democratic Narod (People) movement.

Officially, this led to Navalny being expelled from Yabloko the same year, which accused him of nationalist activities. But Aleksey himself claims he was ruled out after calling for the removal of the party’s founder, Grigory Yavlinsky. At the same time Navalny never hid his nationalistic views.

Other social projects remained in force, while in 2009 Navalny also became advisor to the governor of the Kirov Region. However, it’s fair to say even though he had a lot on his plate, he remined out of the public spotlight throughout all these years, and it wasn’t until his blogging and further anti-corruption activities began that his popularity sky-rocketed.

“Our society is being eaten by decay… It has to be carefully but firmly removed by means of deportation. Only those who have liquid calcium in their heads think nationalism is violent… We have the right to be Russians in Russia and we will defend it”, says “doctor” Navalny, acting as a dentist in a controversial video produced by the Narod movement.


Navalny has been presenting his nationalistic ideas in public for quite some time now. Since 2008 he’s been taking part in the so-called Russian marches, which include ultra-radical movements and illegal organizations, often known for their aggressively nationalistic views. The same year, he took part in the founding of the Russian National Movement, which united various nationalist groups and even promised the new organization would take part in the next parliamentary election, though this promise never came to be fulfilled.

His participation did make Navalny better-known in certain circles, however, many analysts say the open nationalist position actually ended up harming his image when the activist moved to the next stage of public activity – the much wider protest movement which formed after the parliamentary election in December 2011, uniting ordinary people, mostly from the middle class, also known as the creative class. 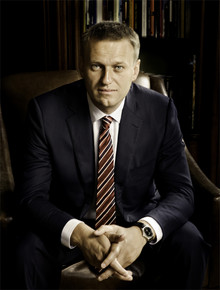 Besides taking part in public rallies and other activities, Aleksey Navalny is one of the most influential bloggers in Russia. His Twitter account has over 200,000 followers, while the web itself has become a powerful instrument for his anti-corruption efforts.

In 2010, Navalny founded an internet portal called RosPil aimed at uncovering corruption schemes in the sphere of state purchases. The idea is pretty simple: the site’s users present various state tenders, usually found on official websites, to independent experts who then audit them for corrupt activity. Later the results are officially formed by lawyers and sent to the authorities. The project is financed from private donations and claims to be fully independent. By May 2011 RosPilreportedly announced it had managed to reveal various fraud schemes worth a total of around $53 million.

In May 2011, Navalny founded another internet project – RosYama, aimed at attracting more attention to the quality of roads in the country and the traffic situation in general. The project encourages drivers to take pictures of potholes they come across, take approximate measurements and send all the information to the site.

Early in 2012, plans for another project were announced – RosVybory, aimed at pointing the public eye on possible violations during elections.

Beside all his projects, Aleksey Navalny also has an official job – he’s a lawyer. In an interview to journalist and opposition activist Leonid Parfyonov, Navalny said the combined yearly budget of all his initiatives rounds up to around $300,000, which, he says, isn't only enough to keep them going, but also to support his family.

Navalny and the protest movement

Aleksey Navalny being detained while taking part in protests on Pushkinskaya square in Moscow on March 5, 2012 (Photo from http://www.navalny.ru)

There are certainly many projects and initiatives that Navalny was or is involved in. But it’s his brutal anti-government stance and fierce criticism of Vladimir Putin personally and the pro-Kremlin United Russia party that really put him in the spotlight. Once as a guest on one radio show he called it a “party of crooks and thieves” and the reference instantly turned into folklore on the internet.

Already noted for his nationalism by some and anti-corruption projects by others, Navalny’s popularity soared along with the protest movement which followed the parliamentary vote in December 2011 amid accusations of ballot fraud. Tens of thousands of people took to the streets of their cities, especially in Moscow, demanding fair elections. Scores of protesters listened to Navalny’s speeches at the biggest rallies Russia’s seen since the early ’90s. Many called him a talented orator, but to some it began to seem Navalny was taking things a bit too far. Speaking at one of the first rallies he claimed he was ready to “bite through [the authorities’] necks” and demonstrated some of the tricks he may have learned at the nationalist rallies he had taken part in.

Navalny, along with several other opposition figures, was arrested and put in prison for 15 days, officially for not abiding with the orders of the police. Ironically, this ended up serving in his favor, since more people began viewing him as a modern-day hero and a true fighter against the regime. However, after a few more controversial speeches and rising criticism on the web for failing to organize the opposition, Navalny’s popularity slipped, although it still most definitely stands at a high level.

In 2011, Foreign Policy journal ranked him 24th among the one hundred best global thinkers.