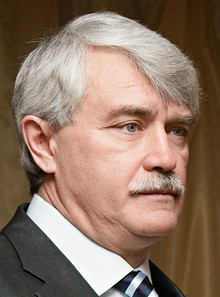 Georgy Poltavchenko is the third governor of St. Petersburg (formerly Leningrad), the second-largest city in Russia and its cultural capital, hometown of Vladimir Putin and Dmitry Medvedev. Georgy was appointed to the position on the 31 August, 2011.

Born 23 February, 1953, in Baku, Azerbaijan, Poltavchenko graduated from Leningrad Aircraft Instrument-making Institute majoring in Aerospace Medical Appliances. Shortly after graduating in 1979, he was called to work for the KGB.

This is one of the reasons then-President Medvedev proposed Georgy's candidacy, “I decided to submit your candidacy to run for governor of St. Petersburg. My choice is predetermined by several factors. First of all, St. Petersburg is a familiar city to you, you learn and grow, dealing with various issues, you worked in St. Petersburg and are well aware of the issues the second metropolis of our country faces. It is a major center of European history with a difficult destiny. Secondly, for the past decade you have worked as the president’s representative in the Central Federal District, and have coordinated public policies in different regions of the Federation, so you have experience with the Central District, Moscow, and other well-developing regions.”

In response, Poltavchenko said he considered this “a great responsibility and good opportunity to do something for his native city.”

St. Petersburg city administration is located in the historic building of Smolny and is headed by the governor (mayor of St. Petersburg until 1996).

In 1990, a single-party system was dropped together with the post of the leader of the regional party organization, and chairman of the City Council became head of the city.

Till 2006 the city’s governor was elected by its residents by direct vote, but in 2004 Russian Federal Law was changed and the governor is now proposed by the country’s president and approved by the city Legislative Assembly.

Poltavchenko’s predecessor Valentina Matvienko was appointed chairman of the Federation Council of the Russian Federation.

Among other duties Poltavchenko is personally supervising the construction of Zenit stadium in St. Petersburg, meant for the FIFA World Cup.